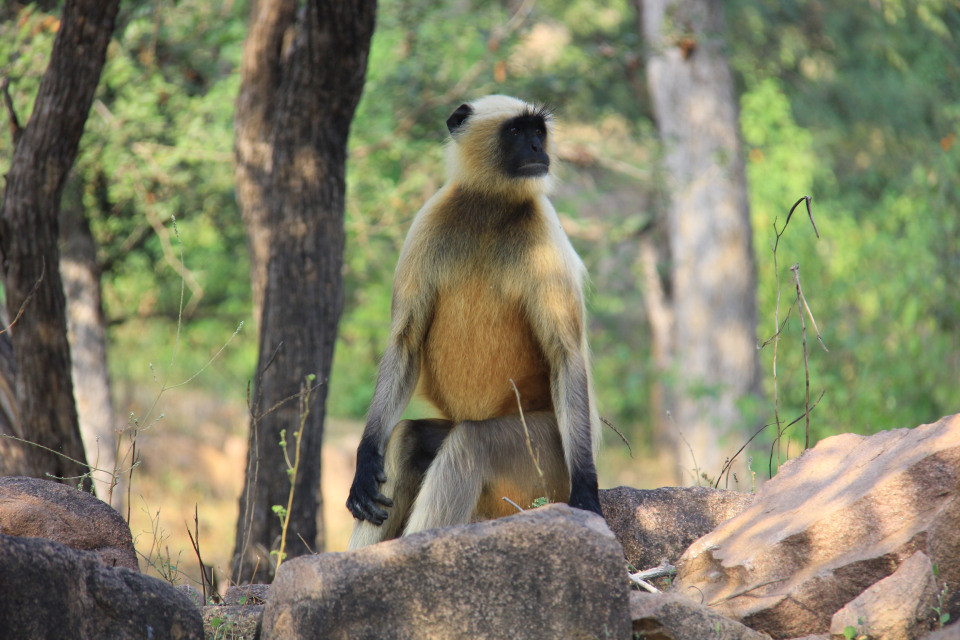 Pandav Falls was steeped in mythological importance and had number of lovely stories associated with it. The mystery man was a local guide who loved the place, and found a lot of peace there. He always visited the falls whenever he saw no people around and spent hours by its glassy heart. He was surprised to see me and we got talking. Since the beautiful view of the falls and the pool from the top got restricted due to 3 accidental deaths 5 years ago, we just did not bother to move from our space and explore around. Moreover bumping into hungry sloth bears or other wild animals was a thought and a possibility which existed too.

A series of fern draped caves stood above us and many years ago, the Bundela kings had created temples out of them. Originally a Gond settlement till the 13th century, it was combined with Bundelkhand (of Orcha fame) by the blessed king Chatrasal. According to the legend the 18th century saint Prannath asked King Chhatrasal to ride out one morning and told him that wherever his horse would trod diamonds would burst out from earth’s depths. King Chatrasal was a valiant ruler, who at that time was struggling for ways to fight against the behemoth Mughal forces and establish his own kingdom. The saint’s prophesy turned out to be completely true and Panna mines have produced many magnificent diamonds over the years. Today the Australian mining giant Rio Tinto are scouring among the dirt and rock in the 954-sq km area for these sparklers, right in the heart of wild Bundelkhand.

King Chatrasal built a beautiful temple in honour of the holy man and till today it remains an important pilgrimage site in Panna. The beautiful tale captivated me and added a deeper mystical aura to the already magical place. I felt very young seated among the Sal and Mahua trees, as they breathed down upon me wisely. Following his advice I filled up my water from the Draupadi Kund,which reportedly had excellent medicinal values. The fern curtains of the Pandava caves waved in the sighing breeze and the steady stream of water kissed my face. These droplets seem to appear dripping out of harsh rocks and have no known/discovered source. According to mythological stories, when Pandavas chose this place as their abode during their exile, there was no water body in the vicinity. Arjuna, one of the 5 Pandava brothers prayed to his father, Lord Indra to help them out but bound by codes of propriety (according to the rules of their exile, nobody was allowed to help them) he refused. Then Bhima, who was the mightiest of them all cracked open the earth with a blow of his club and water sprang out to create the heart shaped pool.

Lord Indra remorseful of turning his son down in times of need, requested Lord Varuna to flow down the mountains as spring water. Angry Pandavas however never partook that water, obviously deeply wounded by Arjuna’s father’s behaviour but Draupadi, their beautiful wife blessed the spring before leaving and rendered it with curative powers. Deep green Panna forests surrounded us and while there was no tiger to be found, this well spring drew leopards, sloth bears, deers, blue bucks and plenty of common langurs at dusk. I thanked my guide, offered him a fee which he promptly refused and climbed out of the park. Netted gauzy leaves were eaten away by the illis, maggots of water flies and sun rays streamed in through them like sprinkle of gold dust. It was breathtakingly beautiful and I was happy to be living there away from the hustle of touristy Khajuraho.

I got another auto rickshaw and traipsed along the broken road for Ken Sanctuary.Arjuna, Sal and Mahua trees accompanied me all the way and I just sat taking in their cool golden fragrance. Arjuna  bark supposedly is very treasured for having excellent curative and qualities and Mahua in bloom is quite a hypnotic sight. These musk scented white flowers are eaten unprocessed or cooked by the tribal of that area and Mahua concentrate extracted from fresh Mahua flowers are also used for making jams, jellies and squash. Once dried they resemble raisins and when fried in ghee, they become a local delicacy. A very potent alcoholic drink is distilled from these flowers by the tribal who vouch for its aphrodisiac qualities. I left the forests soon and passed through narrow stretches of human settlements interspersed with patches of tilled land.

Again the rustic homespun land welcomed me with open arms and ladies took a break from painting their mud huts with diluted cow dung (it has good antiseptic qualities) to smile at me. Thick anklets rang along with buffalo bells and naked children of the beautiful veiled cowherds ran along waving. Tractors hummed busily and men rested in the shade of bundles of dry wheat. Girls returned from school swinging their shiny braids, their chatter silencing the omnipresent loud blackbirds. Ken Gharial Sanctuary gates appeared and after buying the necessary park entry fees, vehicle entry fee and camera ticket, we puttered inside. A short drive down dirt track took me through beautiful fairy forests of Teak and I could see flashes of fur in the distance. It was cool.shaded and very quiet and I wished that I was walking instead of being on the noisy auto rickshaw. It was early evening and the sun was not yet mellow so I hired a local forest guide and went for a walk to remember.

Situated by the Ken/Karnavati River, this sanctuary is actually the buffer zone for Panna National Park. Tendua (from which Indian cigars are manufactured), 2 kinds of gum/Gond trees (from which glue and a sweetmeat called gond ka laddu) and Teak forests created a beautiful canopy and underbrush of wild flowers and wild grass covered the the ground. Fallen golden leaves crunched under our feet as we walked around the area. Sun rays splashed softly through netted gauzy veil of leaves and almost fell like a hushed golden drizzle. They lay broad, velvety and riddled with water fly eggs (the young ones feed on them till they are ready to fly away). Blue bucks watched us unabashedly, the large grey male standing alone proudly away from his brown female partner and young brood. They are very territorial animals and defecated in large amounts to mark their space. Sure enough piles of black buck dung lay haphazardly and pounding hooves of toothed wild boars raced through them. Jackals stared shyly and huge male spotted deer in heat scattered the young females away. He charged at them antlers held high, body stretched in tensed poise and dashed through the bushes jumping right over our heads.

Shocked at the power of the beast we recoiled, because even the slightest touch of his hoof could have shattered our skulls. Clearly shaken we hurried off towards the Gharial watch tower and sat down on the wooden benches overlooking the deceptively calm river. A breath of fresh evening air cooled our over excited hearts and made us bow down to the obvious..the power of the wild, the power of nature.

By the ancient mystical caves

I was alone in my thoughts

Pandav Falls felt like the center of peace in the world

And I went through

For the beautiful Ken Gharial Sanctuary

In the wilderness of Ken Gharial Sanctuary