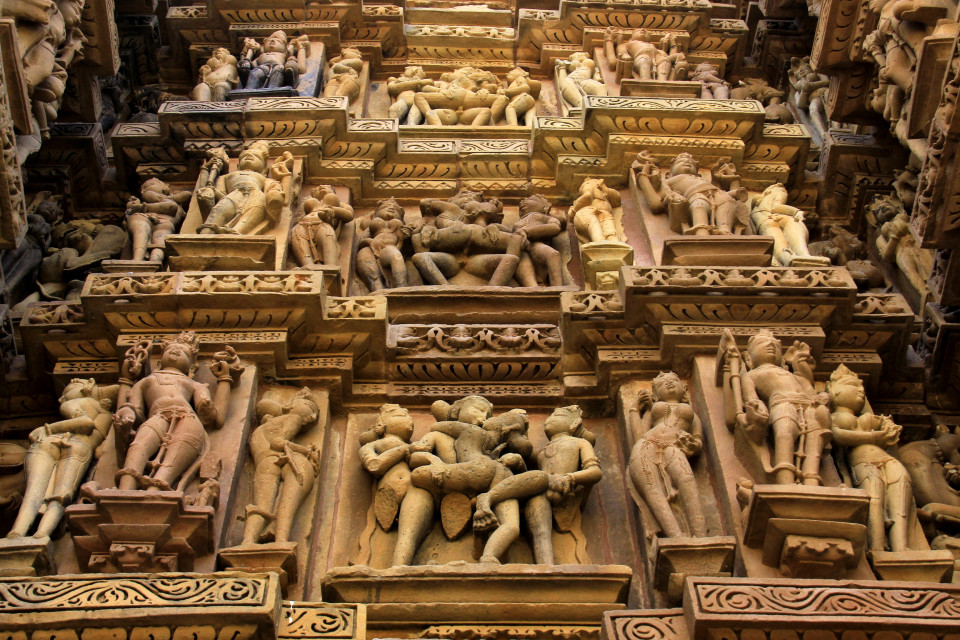 Khajuraho and what lies beneath

While Khajuraho is the crown jewel of the Chandela dynasty, none of the kings ever lived there. It was built as what it still represents today, a magnificent temple complex and that’s why the city does not have a fort. Kalinjar (which once housed a magnificent fort named after the city) was their political capital and Khajuraho became their hub of cultural and religious activities. Chandelas were a great patron of art and they took time, passion and dedication to lavish their arty indulgence in the Khajuraho temples complex. Built over a span of 200 years, Khajuraho originally had over 85 Hindu temples, of which only 25 remain. They are scattered over an area of about 20 square kilometers and are wonderfully preserved, thanks to grueling efforts of the ASI (Archaeological Society of India). After the fall of the Chandelas, Khajuraho slipped through the cracks of time,got forgotten and was claimed back by nature.

Thankfully the locals of the area, were always aware of the temples and kept them maintained. They were the ones (generations later) who pointed out the temples to the English in the late 19th century and saved them from extinction. Grouped in 3 different complexes (Western, Eastern and Southern), all of Khajuraho temples are made of sandstone except Kandariya Mahadev and Chausath Yogini temples which are made of granite. Mortar was not used in construction of the temples, instead the builders joined the stone blocks using mortise and tenon process (where one stone is grooved in such a way that the other block with stub can fit in and is held in place by gravity). This process needs fine precision and the temples were built with blocks weighing up to 20 tonnes.

So what lies beneath the confusing skin show of Khajuraho?  The secret (one of the explanations offered) probably lies in the fact that Chandelas built these temples when Tantric practices where prevalent in the society. Boys lived in hermitages or Gurukuls (following celibacy, monastic practices and spiritual learning) till they achieved maturity. Upon graduating as men, they learned about the worldly affairs and prepared themselves for conjugal life by studying these sculptures and the worldly desires they depicted. Tantra is a kind of spiritual cult, which originated in India around 5th century A.D. It is a complicated, multi branched style of spiritual learning which includes meditation, chants, rituals, sexual practices and often occult.

Erotic art of Khajuraho are concentrated only in a few temples and they cover entire panels and often walls, mostly exterior ones. These sculptures are strategically placed, are riddled with symbolism and instead of procreation, strangely focuses on the pleasure of love making. The then prevalent cult of Tantra believed in sexual rituals as a means of catalyzing biochemical transformations in the body to facilitate heightened states of awareness and often constituted them as offerings to appease Tantric deities. The rite emphasize the primacy of bliss and divine union and serve three distinct purposes: procreation, pleasure and liberation. The ritual is believed to balance integral energies in both the participants and its culmination creates dissolution of individual personality and identity in higher cosmic consciousness. They also believed that the union of male and female represented conjoining of Shiva and Shakti (main male and female principles of Hinduism) and thus created an unified energy field which contained seamless blending of destruction and recreation.

Moreover Tantra also included occult and mixed it heavily with human body and love making. So the strategically placed sculptures are also believed to be used as “symbolical – magical diagrams, or yantras” (to ward off evil eye) and to appease malevolent spirits. They are believed to also symbolize raw force through human acts, for example sexual images imply a virile, thus powerful, ruler. Since the first human walked on earth, the power of a man has been primarily connected with his virility and as humans we instinctively understand the importance of regeneration to avoid getting extinct. Thus sexual images depicted a powerful, virile ruler ensuring progression of his dynasty and stability to his kingdom.

I wandered along the Western temple complex of Khajuraho the first day just gawking and taking photographs. It’s sculptures taunted me with puzzling clues till I gave up only to visit the site ASI office to learn about it’s secrets. What got revealed in the dusty library was completely eye opening and intoxicating at the same time. I was more prepared to face the Khajuraho challenge when I returned the next day, found the clues I was looking and headlong dived into the secret world of power, sex and occult.

Khajuraho is complicated and layered

Griffins or Kirtimukhs(meant to guard the temples)

And mind blowing symbol of virility and power.