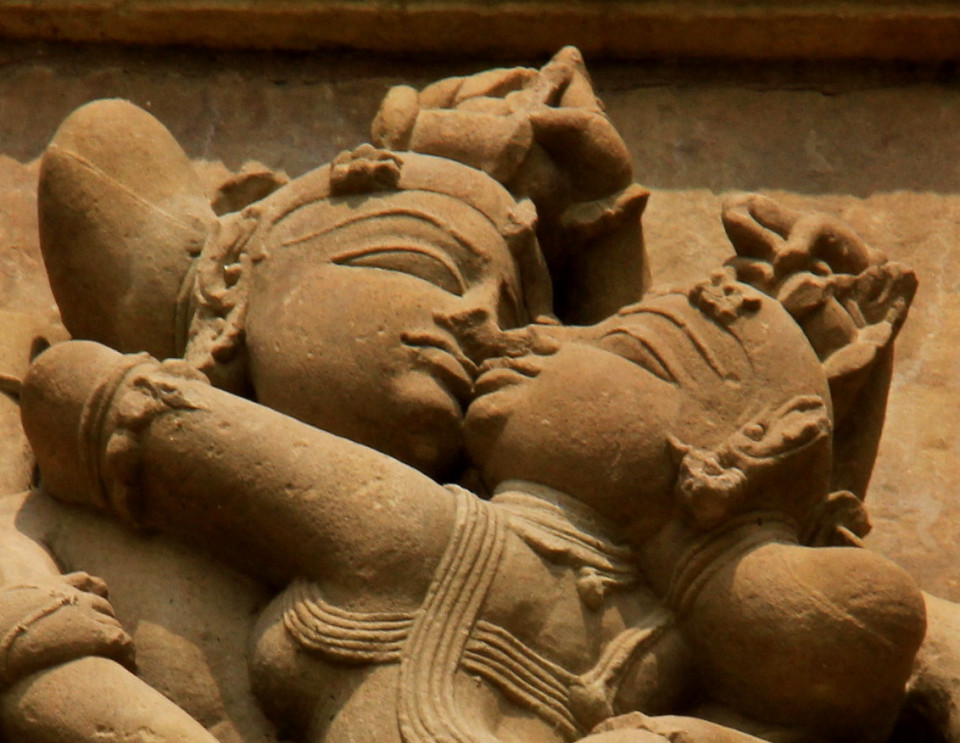 I started with the Varaha temple which is located on the left side of the entrance of the Western group of Khajuraho temples. Built in 925 A.D, it is one of the oldest of Khajuraho temples and houses an impressive sandstone monolithic (made of single stone) statue of boar. It is a small sandstone temple built on a high platform and is simple and modest at first sight. As I climbed up the stairs, I nearly reeled with shock because the 1 and half meters high statue of the boar, which is housed inside totally belies the austere exteriors. It is one of the most exquisite monolithic statues I had ever seen and India is a country of exquisite statues.

Beautifully preserved, it is intricately carved with 675 Hindu gods and goddesses in 12 neat rows and at its feet, a 100 hooded holy snake Sheshnag lay coiled with Lord Vishnu (one of principles of Hinduism) luxuriously reclined on it. Statue of Earth goddess is the only part missing and remains of it are visible today. The sheer amount of beauty compressed in such a small area is mind blowing and when compared with its plain exterior, it seems powerfully restrained thus heightening its effect. Perhaps that was what exactly the architects and sculptors had in mind when they created this exquisite piece and placed it in such a plain shrine. It’s snout carried a miniature and intricately detailed goddess Saraswati, who is the companion and daughter of Lord Brahma (one of the 3 among the Hindu trinity of Brahma,Vishnu and Shiva). Saraswati or Gayatri is a beautiful, intelligent goddess created by Brahma out of himself to produce human race (hence his daughter), who as Saraswati is his consort. Interestingly she fell in love with her own brother, Surya or Sun God so madly that she dissolved herself into the powerful Gayatri mantra (the most sacred Hindu chant) dedicated to him.

The boar or Varaha is an incarnation of one of the holy trinity Lord Vishnu and he had rescued Earth or Prithvi from the demon Hiranyaksha. The demon had carried Prithvi to the depths of the cosmic ocean and Lord Vishnu in form of a boar battled him for over a thousand years before carrying her out between his tasks and restoring her back to her original place in the universe. Installed by the king Yashovarman, it symbolized that the powerful king protected his people just as the boar protected the Earth.

The stunning and hugely overpowering Lakhsmana Temple stood bang opposite the diminutive Varaha temple and to me it seemed too big and too ostentatious in comparison to the surprise package of the Boar. Dedicated to Lord Vaikuntha Vishnu (when he is represented as the Supreme Being) it was also built by king Yashovarman around 950 A.D. Constructed on a broad tall platform or Jagati (to create awareness of the supremacy of the deity housed inside), it is a stunning design having all the elements of Hindu temple architecture – Entrance porch (Ardh-Mandapa, intermediary space between temple exterior and the inner sanctum, it is often beautifully carved with mentions of the glory of its beneficiary king), Mandapa ( pillared outdoor hall used for public audience by the king after religious ceremonies and public rituals), Maha Mandapa (the biggest of the intermediary space used for religious rites), Antarala (the private and ornately carved foyer connecting the inner sanctum with the Mandapa, it was often used to hold dance and musical performances dedicated to the deity) and inner sanctum (Garba griha or womb which houses the deity. It is the most important part of the temple and is starkly plain without any ornamentation denoting the state we were and would be in, at the beginning and end of our lives, thus inviting devotees to alleviate themselves from materialistic world into the path of humility.

It was an exquisite temple crammed with ornate balustrades, balconied windows and rows of panels containing stunning sculptures of Chandela life, divine figures and erotic art (some of which are shockingly pornographic). They are carved along the base of the temple and immediately time froze for me again. The larger than life medieval era became real and I again became the insignificant voyeur. Scenes from battles, men hunting, wrestlers entertaining merry makers, religious teacher discoursing with disciples while being fanned by a female attendant became naughtier as acts of bestiality got featured. The morality struggle of the peeping Tom who could not help himself from gawking at the man with a horse made it so real and identifiable with the present layered prudish “naughty” India, that it made me wonder if the Khajuraho representation of the open Chandela society was actually for real or a figment of the artisans’ imagination.

The Lakshmana temple stood right next to only functioning Matangeshwar Shiva temple and only a thin boundary wall separated the 2 spheres of time – the present and the overpowering. Devotees thronged the Matangeshwar temple, fuzzy goats scooted around looking for left over floral offerings and bells tolled sweetly reminding me of the timelessness of frozen beauty and purpose. One of the sculptors chiseled at the Lakshamana temple, immortalized in frozen concentration, the only monument where the creator got recognized and a dancing Ganesha with small band of musicians and row of elephants at his feet celebrated a very tangible sense of rhythm and movement. Hideous Kirtimukhs (griffins) guarded the temple jealously and celestial beauties enamoured for attention from every corner.

Voluptuous,thin waisted and bejewelled, the Sura Sundaris were epitome of Indian beauty (high breasted, thin waisted and broad hipped with doe eyes, full lips and elaborate hairdo).  They twisted amorously all busy in different feminine activities and all of them drew enraptured attention. One raised her arm languorously exposing nail marks of love, absolutely disinterested in the fact that she was next to the powerful Lord Shiva holding a trident and a love making couple remained locked in acrobatic position next to him. The woman had her arms delicately placed around the man’s neck, while their 2 attendants pleasured themselves openly.

It was strange and very claustrophobic at times, with the nagging feeling that the entire temple was actually an apartment building where unknown to the residents a camera captured all their daily activities constantly…sort of like a very voyeuristic reality show. It was hard to accept that the lovers staring into each others eyes tenderly were not real and it was okay to gawk at the  half nude stunning Sura Sundari who post bath was wringing her hair to feed the droplets to the goose or hamsa which sat at her feet. Lord Vishnu,the preserver, one of the holy trinity and house deity blew a conch shell next to her. It was too erotic and the unabashed portrayal of it at times became a little difficult to grasp. It was like watching a pornographic movie openly in a public area and I had to remind myself constantly to go beyond skin deep.

Khajuraho is no way skin deep and neither was the pan India movement of Tantra which left its marks in many erotic art temples all across the country. It ‘s just the strange juxtaposition of divinity with mortality which creates this phantasmagoria. The sun came up high in the sky and the aura of all the love making made the day hotter. I took a break from them all and watched the afternoon descend in a hazy glimmer over the entire templescape. I definitely needed a break before moving on and I had just had experienced only 1 and half temple of Khajuraho. It was getting deeper, more impressionable and more Khajuraho at every step.

Was a beautiful surprise

And revealed the compressed yet highly magnified excellence captured in a small space.

With the entire Hindu universe wrapped on him

Where the residents were caught in a shady reality show

It was an exquisite piece of art

And a chronicle of Chandela life

Thankfully the presence of next door Matangeshwar temple