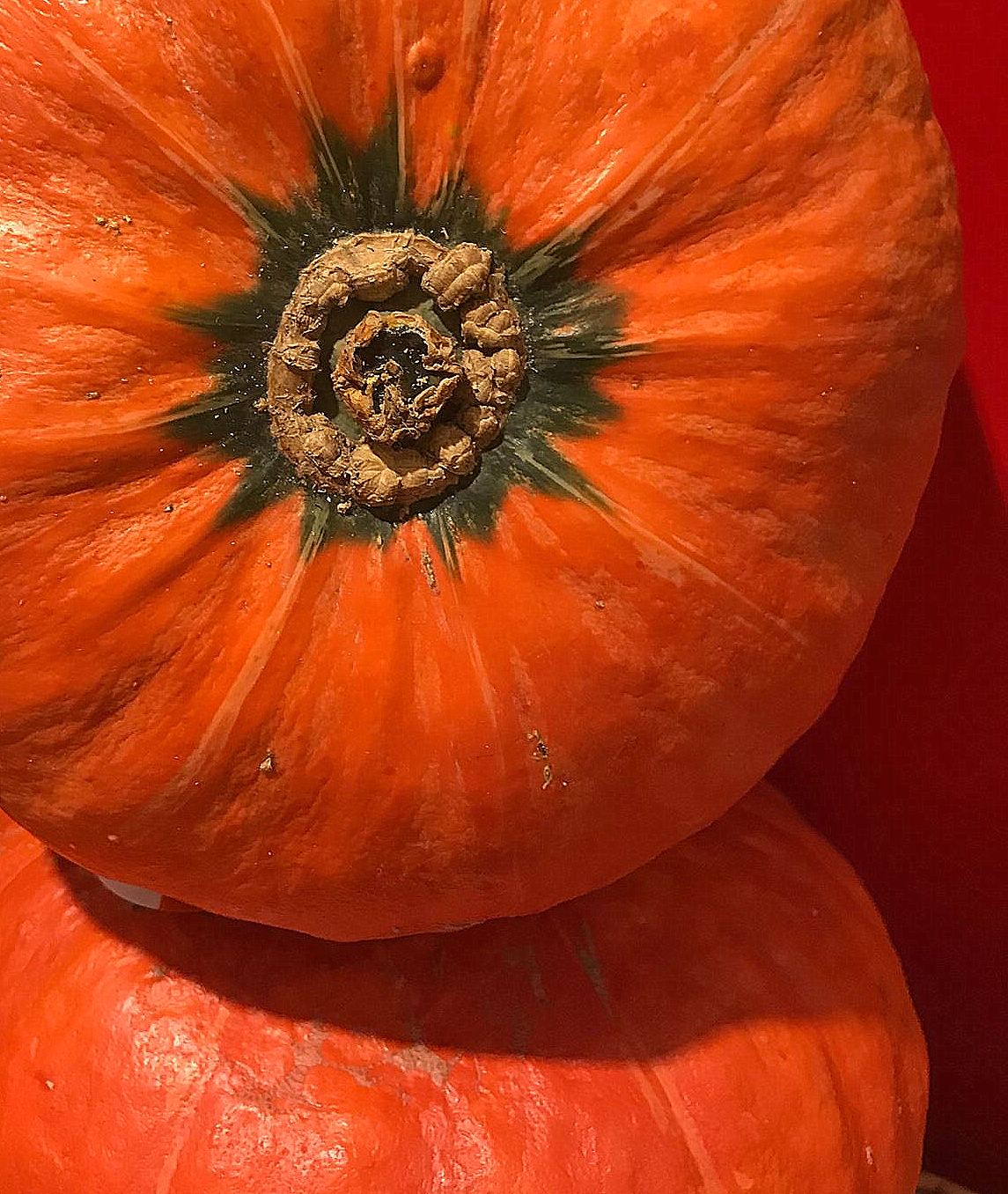 Fall has set in early this year bringing with it damp skies and rain. Sniffles, sneezes, and warm socks are in rage and the temperature has dipped low enough to turn the heating on. It‘s not the nicest weather and we are indulging in hearty stews to keep ourselves warm. Strangely, most of the autumn vegetables are not in the market yet, so the merry summer flowers, blood red geraniums are still blooming riotously and trees seem to be unable to decide whether to change colours or not. They stand mute in their wet half green-gold foliage while the fallen autumn leaves create a scanty carpet. The landscape seems devoid of all colour, with only the plump pumpkins adding dashes of saffron gold. Thankfully, the German Farmers’ markets are full of these fall goodness and I have already made creamy pumpkin soup thrice this month.

Pumpkin and squash can be for summer and winter.       PhotoCredit – Albunarium

The journey of pumpkin from North America to Europe

Though Germany is experiencing an ongoing “pumpkin boom”, this autumn vegetable is originally not from Europe. A native of North America, it was the European settlers, who borrowed pumpkins from the American Indians to adopt into their diet. The meaty, filling texture of the vegetable became quickly popular among the newcomers and they brought samples of it back to Europe. That was many centuries ago, and ever since pumpkin has been well integrated into the European diet, especially in Germany. In the German language, pumpkin is called Kürbis and this is extended to squashes as well. Products of the Cucurbitaceae flora family, pumpkin and squash are botanically not considered as vegetables and due to their fleshy interiors containing seeds, are marked as fruits. In Germany, every bit of pumpkin, except for the skin is highly relished and it is used for cooking, baking, in coffee, cakes, as decoration, and essences.
You may also like: Autumn comes home in Germany

There are many popular varieties of kürbis available in Germany and the most popular ones are Acorn squash (Eichelkürbis, Ambercup Squash (Hokkaido), Baby Summer Squash or Pattypan Squash (Pattissons), Butternut Squash (Butternuss-Kürbis), Pumpkin (Speisekürbis, Gartenkürbis, or Kürbis), Spaghetti Squash (Spaghetti-Kürbis) and Zucchini. Kürbis can be broadly classified as either “winter squash” or “summer squash” and most varieties are available year round. To celebrate this pumpkin love, the German city of Ludwigsburg in Baden-Württemberg hosts largest pumpkin festival in the world. The Ludwigsburg Pumpkin Festival (Kürbisausstellung) marks that time of the year when pumpkins outnumber the residents of the city and more than 450,000 of these fruits descend every year. Initiated by two brothers, Beat and Martin Jucker in 2000, Ludwigsburg Pumpkin Festival attracts 400,000 pumpkin lovers over a nine-week period. This is a huge sign of the growing popularity of pumpkins in Germany today and this boom” is credited more to the increasing popularity of Halloween than the delicious taste of pumpkin soup on cold, autumn nights.
You may also like: Golden silky pfifferling mushrooms in Germany

Pumpkin‘s secret reason for the popularity in Germany

According to the German Federal Statistics Office, Germany‘s pumpkin mania is mostly due to the rising popularity of the American custom of Halloween and this festival means big business for the orange globule farmers. Though the carving of pumpkins dates back to medieval Britain and Ireland, it was the Americans who turned it into a global trend and Germany‘s Halloween industry is worth an estimated €160 million. A festival placed third in importance behind Christmas and Easter, this festival has a lot of economic clouts and it means more pumpkins are being carved in Germany than before. Of course, the increasing health conscious and ever-growing vegetarian population of Germany guarantees that the charm of this orange bubble will continue and we will keep enjoying my special creamy kürbis year after year. Now if I have tempted you enough with the nutty, fleshy kürbis, do try out this interesting recipe. This easy peasy one is guaranteed to be a family pleaser and is a great alternative to chicken soup for the soul.
Suggested Read: The whacky trend of Bärlauch

P.S – This blog post is part of the weekly series called the Cologne Diaries. Every week, Maverickbird will take on a new theme, emotion, and beauty of expat life in Cologne.

What other bloggers have to say about pumpkins and autumn in Germany – Melanie Fontaine, Oh God My Wife is German