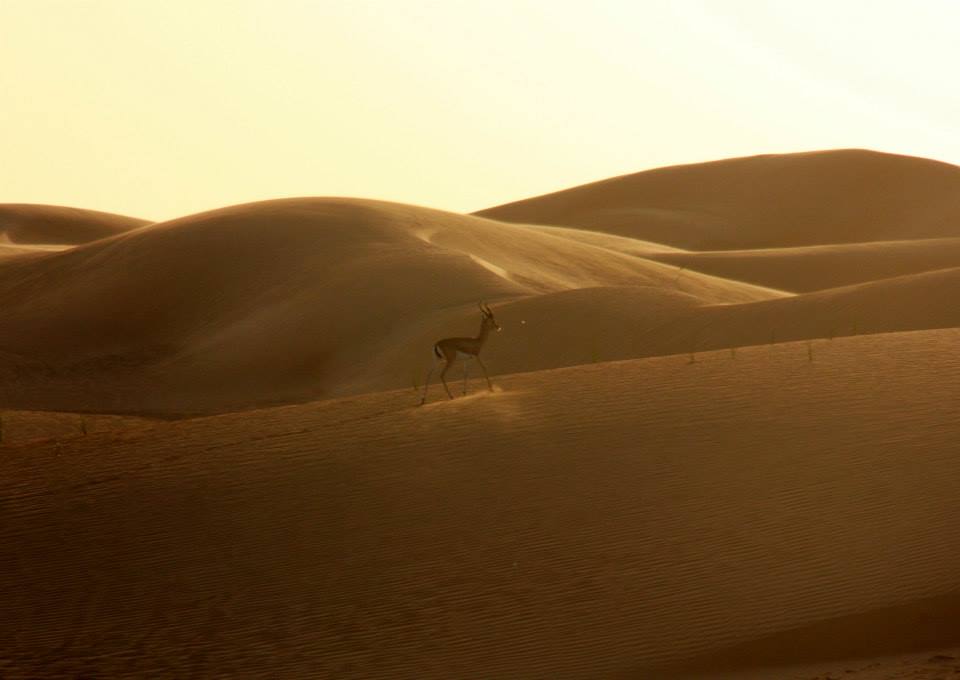 Walk on the wild side in Dubai

Wildlife watching is not the first thing which comes to anybody’s mind when imagining a Dubai vacation or break, but this desert city has some very beautiful and protected wildlife sanctuaries. I happened to experience 2 of Dubai’s best kept wildlife secrets in 1 day and while 1 was by invitation, the other happened by chance. I stumbled upon the Ras Al Khor Wildlife Sanctuary when once on my way from Oman, my eyes fell on layers of mobile shell pink. They were the resident flamingos of Ras Al Khor and as they strutted pink and proud with Dubai skyline shimmering in the background, I nearly pinched myself in disbelief.

The Ras Al Khor Wildlife Sanctuary is UAE’s first Ramsar wetland site and is one of the few urban protected areas in the world. Located at the head of the salty Dubai Creek, Ras Al Khor lies between the Persian Gulf and Al Awir Desert and consists of salt and mudflats, mangrove forests, lagoons, pools and few tiny islands. It is open to visitors and the best time to watch the fflamingoes is at the feeding time in the morning. An important winter destination for aquatic and migratory birds, Ras Al Khor supports nearly 67 species of avians, especially the East African and West Asian flyways. It stretches over 620 hectares and is a gem of a place. A covered walkway from the parking area leads to the watchtower and wired enclosure keeps visitors at bay. Powerful binoculars however are provided by the friendly watch tower guards for closer views of these magnificent gangly birds.

I spent an entire morning there basking in the surreal sight of free wildlife in midst of Dubai’s busy commerce before heading out for another Dubai wildlife secret. This one was by invitation and was so incredible that I nearly kissed my host out of happiness. It was a surprise visit to the stunning Dubai Desert Conservation Reserve and an overnight stay at the beautiful Al Maha Desert Resort and Spa. Established in 2003, Dubai Desert Conservation Reserve is a 225 square kilometers of natural reserve and UAE’s first national park. Careful planning and dedicated rehabilitation is relentlessly followed to preserve UAE’s beautiful desert heritage and reintroduce nearly extinct local wildlife.

It is nearly an hour’s drive from the city and I looked forward to a night in the desert. Dubai’s desert was rose coloured and gently rolling and I found them very fascinating. Shadows deepened and rippled with the change of light and colour varied from pink to deep saffron. Small meswak bushes grew in clumps and I could almost picture Bedouin ladies of an erstwhile era collecting the twigs to use as toothbrushes. Henna shrubs also lay scattered in hedges and the leaves were still used for make up and hair dye. Strangely for a desert, there was a large number of birds around. Hunting which used to be a popular Arab sport of the rich is now banned in UAE and the Emirati sheikhs travel to wild areas of Pakistan, Uzbekistan etc with their falcons to shoot game. After a rather uneventful drive I finally reached the gates of Dubai Desert Conservation Reserve where my friend’s vintage Range Rover awaited me and his other guests. The sun was already low and the desert breeze had turned mild.

We tied up our hair in traditional keffiyeh (headscarf), piled onto the vinatge jeep and got going. The desert stretched in mounds bordered by indigenous gaf trees (planted to stabilize the shifting sands during sand storms) and small patches of wooded shrubs. These were homes of the desert scorpions and snakes which came out only at nights after the sands gave off the day’s heat. Dubai Desert Conservation Reserve is home to many unique mammals like the sand fox, red fox, caracal, sand cat, Gordon wild cat, Arabian oryx, Arabian gazelle and sand gazelle apart from a wide variety of rabbits, hares, hedgehogs, shrews and rodents. There is also a healthy population of many varieties of skinks, beautiful lizards, geckos, snakes, insects and worms. Seemingly inhospitable its is a wonder how the arid sands have nurtured life of so many creatures and ancient generations of human civilization and trades. Many plants also grow in the desert and during flowering time, shrubs like broomrape, caper, daisies etc colour the sands in multi coloured patches.

The desert was dry and devoid of blooms when I visited there, but it was still very beautiful in its blushing colours. Gazelles and oryxes scampered past and it was a beautiful evening drive through the rolling sandy expanse. The vintage jeep climbed up and down the dunes, often tilting at dangerous angles, because the driver felt that since we were in the Emirati desert, we ought to experience some dune bashing too. We were thrown against each, got sand on our tongues and I ended up with a queasy stomach. Sand dune bashing was definitely not my cup of tea and I eagerly waited to reach the dinner camp site.

My host was a close friend from Lebanon who had struck gold in UAE and was a partner in the Dubai based luxury tour company called Platinum Heritage. http://platinum-heritage.com/ They specialize in luxury experiential tours and believe in upholding the Emirati hospitality in its truest form. Although the evening was promised to be eventful and long, I was content at just staring at the beauty of the desert. After crying over the non existence of the desert in the city, where manicured lawns, fruiting date palms and brilliantly flowering flame trees have taken over, the soft starkness of the rolling sands was like a visual treat. We soon reached a spot were a few mattresses and cushions had been thrown over the sand and refreshed ourselves with cold water, fragrant wet towels and sherbets. The sun sank low over the horizon as we waited for Romeo and the sky got painted in faint shades of red and blue.

Romeo made a grand entrance, hooded, decked up and accompanied by an attendant in an air conditioned luxury car. He was small for his size, highly arrogant and I quickly realized that some of the sheen of money had rubbed off on the prized falcons too. Romeo was highly prized and he knew it. He was accompanied by his trainer who showed off UAE’s legendary passion of falconry and I fell head over heels in love with Romeo.

Falcons are the fastest moving creature on the planet and kill prey by swooping down at them at an incredible speed. Much prized and kept as treasures by the rich Arab sheikhs, falcons are seasonal pets. Falconry came into existence when the Bedouins started catching these migratory birds and training them to hunt, to tide over the scarcity of food in winter. They would keep the falcons all winter, hunt small animals and birds with them and release them with the advent of summer. Training a falcon takes skill and patience because they can never be maintained as domesticated birds. Even if a falcon lives with a master for a few months or even a year, they tend to fly away the moment they get released. Bedouins train the falcon by giving them a portion of the hunt to eat first. Falcons are kept fit by making them undergo 2 kinds of swooping movements called ground pass and air pass. A small portion of meat is attached to a long rope which is swooped around like a lasso for the falcon to catch. The trick is to catch them when they are eating because a falcon will always fly away once it is full.

Falcons are also pretty fidgety birds and are usually kept hooded to keep them calm. A swanky souk in Dubai has been dedicated for the accessories and treats of these precious seasonal birds. Located at Nad Al Sheba-Meydan Road, the 27, 500 square  meters Falcon Heritage and Sports Center is the only place in Dubai where UAE’s national bird can be legally sold and bought. The center also has a museum dedicated to the bird, which is a part of the Emirati history and integral part of desert life, apart from shops selling delicate hoods, protective gauntlets worn by handlers and a falconry training school and veterinary clinic.

Symbol of force, courage and pride, falcon is represented in UAE’s stamps, currency and national emblem. Falconry is an important and historical part of Arab tradition and they love this forceful bird of prey. Falcons travel with their owners only in 1st class, live in constant air conditioning as they cannot stand hot weather and are worth their weight in multiple Ferraris. In fact, the bigger and heavier (females are bigger than the males) falcons fetch mini king’s ransom and the female white falcon is one of the most expensive pets in the world. I loved falconry and the swooping movement of the bird but Romeo got cranky and left soon. We headed for the dinner camp where traditional dinner and Tanura dance entertained us till stars filled the sky. It had been a beautiful night and eventful as promised and as I got escorted to the Al Maha Desert Resort and Spa, I wished for the evening to go on.

In the urban jungle

Once on my way back from Oman

And its beautiful pink residents

Ras Al Khor was a treat for urban sore eyes

Turned out to be lovelier

Made me fall in love with

And its desert’s soft sensual curves