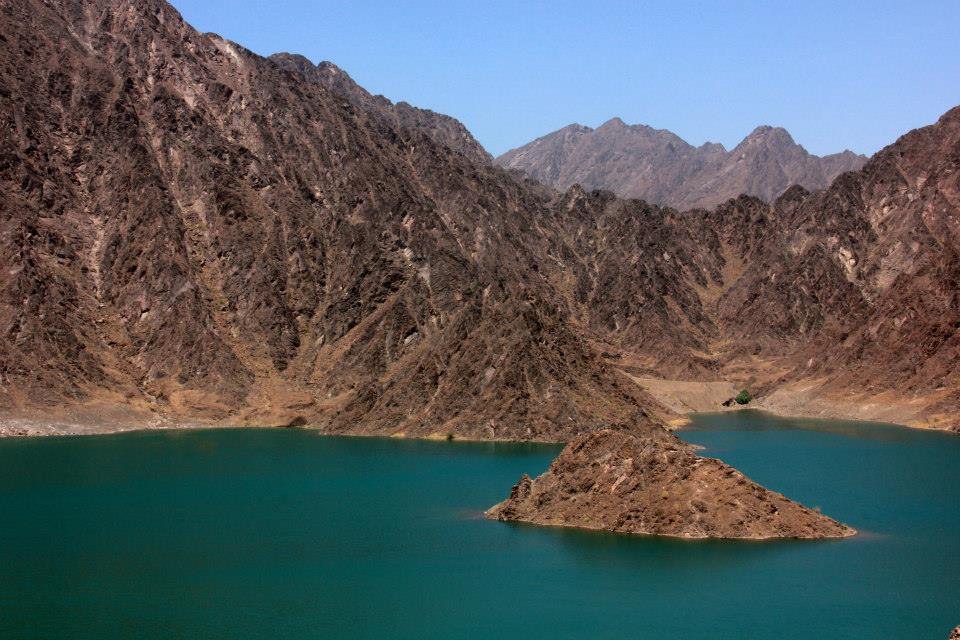 Hajar mountain tour, visit to Hatta village and Fujairah drive happened on 2 boredom filled days. Dubai was seething under unbearable heat and weekend appeared in the horizon. Burak had work and I was left alone in the desert city with tons of time on my hands and nothing to do. A Filipino girl whom I had met through a social networking site for travelers invited me for dinner at her place and over a sumptuous spread of Laing and steamed rice, she suggested these 2 day trips. I had visited Hajar mountains in Oman before and had vague recollections of their rocky beauty. I chose to visit Hatta village first and ended up having the most excruciatingly tiring day.

Hatta is a small village enclosed among the mighty Hajar mountains and is more famous for its lovely rock pools. There are plenty of tour agencies which offer both clubbed together and Hatta is a popular weekend getaway for UAE residents. I chose an off road adventure tour and excitedly had an early start of the day. The drive to Hatta (via the Hatta highway) took more than an hour and I watched the fascinating change of scenery and desert colours as we sped towards Oman. The desert around Dubai is of a lovely pink colour, but the sand changes hue from one emirate to another. The desert around Abu Dhabi was dazzling white/gold depending on it and around Fujairah it was light yellow. Hajar mountains appeared soon and soon the flat gently rolling expanse got violated in craggy peaks and valley.

I had already been advised to carry my passport as Hatta is accessible after crossing a sliver of Omani land. The passport checks were breezy and it was hardly a matter of minutes before we left Oman to again re-enter UAE. The sun was high and the picturesque road shimmered in the heat. We stopped briefly at a gas station where I unfortunately ended up trying camel milk. Oman reportedly offered gas at lower prices than UAE and all Dubai based vehicles (on that route), thronged there to fill up the fuel tanks. It was too hot to wait in the car and moreover as a single woman, I was getting too much of uncomfortably long stares. I ran to the convenience store and after much contemplation chose a bottle of camel milk.

Although healthy, the camel milk was revolting and I struggled to finish it as I waited for my car to get ready. I had already tried a camel burger at the Dubai based swanky Local House restaurant and a camel milk cappuccino at Coffee2go cafe before and had found both quite palatable. My car got tanked up finally and we resumed our drive through the beautiful peach coloured desert dotted with Arabian pottery shops. Hatta appeared soon, like a lovely little oasis and a dusty mall welcomed us. A lovely little preserved village, it was a heritage site and even had authentic loam houses, restored traditional falaj (irrigation system) and watchtowers crowning its hill tops. The village was pretty nice to explore but the unbearable heat made me scamper back to the car. Hatta Dam was close by and being UAE’s non salty stagnant water body, I decided to pay it a visit.

Beautiful, deep emerald the water lay cupped in a rocky bowl and irrigated the oasis like land around. Emiratis I was told prefer quiet and peace of the countryside and suburbs more than the city and love dwelling in squat low traditional houses. The Hatta village had lots of local Emiratis living there, who owned acres of farmland, orchard and date tree plantations. We soon left Hatta behind and our continued our drive towards the Hatta pools. Gushing out through the craigs of the inhospitable Hajar mountains, Hatta Pools were magical. We were again back in Oman and deep into the interiors of the stunning Hajar mountains. Al Hajar, meaning stone mountains in Arabic is shared by both UAE and Oman and supports quit a lot of plant life. It also used to be home of the critically endangered Arabian Leopard, although none had been sighted for a long time. The mountain range was stunning due to its shapes and varied colours and they were apart from Ladakh, the most beautiful rocky range I had ever seen.

Streaks of brilliant purple, gold, green and greys flashed in the sun and from gentle folds to sharp jagged peaks, Hajar’s beauty was mesmerizing. We drove over many dry river beds, trickling streams of water and rocky terrain for some time before the emerald ribbon of Hatta Pools appeared like a mirage. It was a little far from the marked road and I walked down to its rocky edge. Flowing through a rocky canyon, the natural pool appeared out of nowhere and was too irresistible to not plunge into. I jumped into the cool, refreshing pool, floated down the canyon and basked in the rocky shadows. The sky was impossibly blue and the canyon was serenely empty. I happily spent the rest of the day there and it was worth the boring, hot day. The drive back was uneventful and the sight of trash littered Hajar mountains was very heart breaking. That night back in the urban comfort of Dubai, I slept like a baby and did not even once crib about the city’s obnoxious heat.

Fujairah happened the next day and while I slept all the way to its star attraction Dibba, the drive through the Hajar mountains again via the Sharjah Kalba road was again very breathtaking. The Hajar mountains in that part had better roads and held many farms and orchards. Wadis lay hidden between their folds and pomegranate, apricot, wild olive and fig trees dotted the mountains. Scrubland also bordered the road in most parts and Fujairah seemed more naturally green than Dubai. A small new settlement, it is a port city and a far cry from flashy Dubai. Dusty, with less ostentatious show of money, it was the only place where I found fruit laden mango trees at every garden. A promenade faced the Gulf of Oman (not Persian Gulf like rest of the Emirates) and fishing boats docked at its sandy beach. Although nothing spectacular, it gave a living glimpse of how Dubai must have been in the initial days of its meteoric rise.

While the summer heat made both the day trips pretty tedious, if I had a choice to do both of them again I definitely would. While they were nothing spectacular in their characteristics, both provided deep insights into life that exists beyond Dubai. Because of all her dazzle, glamour and bustle, it is often difficult to experience the charm of UAE beyond Dubai.

TRAVEL TIP – UAE offers many off road adventures and some of the most popular ones are Wadi Al Wurayah and Al Bidiya Mosque, oldest mosque in UAE, Jebel Maleihah and its 80 millions years old fossils apart from Hatta Pools. Fujairah and Dibba also make interesting day trips due to its proximity to the Mussandam Coast and has the Al Bithnah Fort, Heritage village as well as great seafood. For those interested in nature tours try fishing and night crab hunting trips in the mangroves of Umm Al Quwain. Food lovers must absolutely try the Old Dubai Food Trail with Frying Pan Adventures. Passionate, knowledgeable and friendly, they provide a mouth watering insight into the regional culinary scene.