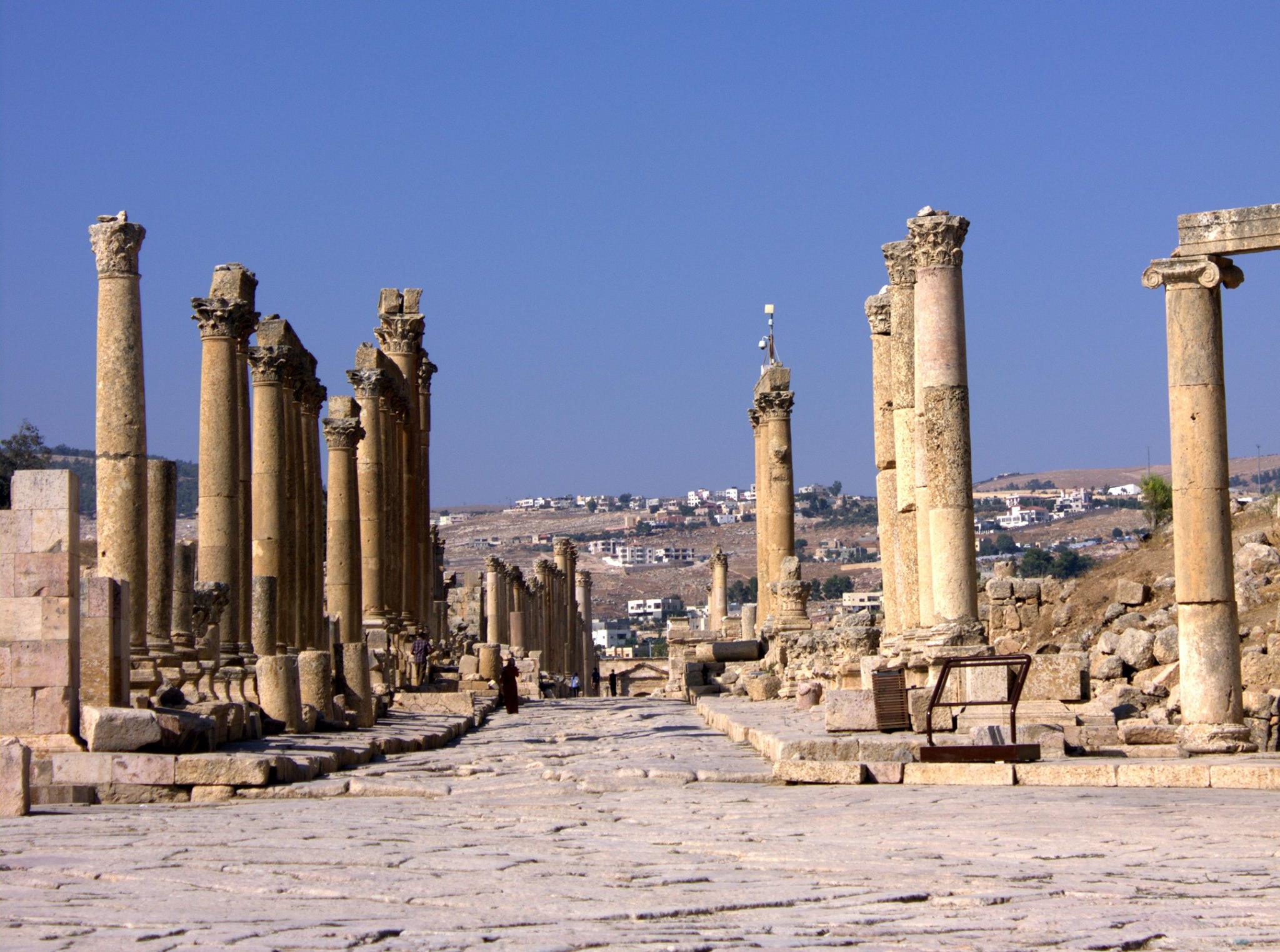 Top fun things to do in Jordan

1. Amman Walks – While Amman (Central Jordan) is usually treated as just a jumping off base to explore Jordan, this lovely ME city is a treasure house of historical wealth. It makes sense to dedicate 2 days to Amman to explore its interesting sights, winding hills, street art and bustling mix of exotic and cosmopolitan local life. Do visit the Jordan Archaeological Museum in Amman to see its star exhibits-the 4 Iron Age coffins and the Dead Sea Scrolls.

2. Unbeatable Petra – Petra (South East Jordan) is undoubtedly the crown jewel in the Jordan tourism crown and most travelers explore Petra for at least 2 days. Petra walk at night (Monday, Wednesday and Thursday) is one of the most beautiful travel experiences and should not be missed.

3. Go Roman – Jerash (North Jordan) is the second most visited tourist destination in Jordan and is famous for the glorious Roman ruins.

4. Byzantine and back – Umm Qais ( North Jordan, Romans favourite and Site of the famous Miracle of the Gadarene Swine), Pella ( North Jordan famous for remains of Bronze and Iron Age cities, Byzantine ruins etc) and Madaba (Central Jordan) are equally impressive. Madaba has the oldest known map of the Middle East in form of a spectacular Byzantine mosaic laid on the church floor.

5. Get high on spirituality – Mount Nebo (Central Jordan) which is just 10 minutes away from Madaba, is perhaps Jordan’s most revered spot. Reputed as the burial place of Moses, the proximity of the Madaba mosaic map of the Holy Land, inlaid on a church floor to Mount Nebo had always been controversial. Most believe that it represented the vision that Moses had of the Holy Land from the place of his death.

6. Follow Biblical clues – Mukawir (South Jordan) is also close by and it falls on the picturesque King’s Highway en route to Madaba. Mukawir was Herod, the Great’s hilltop stronghold and it was here that John, the Baptist was beheaded after Salome performed her seductive dance. Lot’s Cave, where Abraham’s nephew took refuge after the destruction of Sodom and Gomorrah is also nearby. The Biblical Baptism Sites (recently made famous by the Pope’s visit) of Elijah’s Hill and Bethany-beyond-the-Jordan ( South Jordan,where Martha and Mary lived and Jesus was baptized by John, the Baptist) fall on the way to the Dead Sea and is worth exploring too. Elijah’s Hill/Jabal Mar Elias is also nearby and according to Biblical legends this was where Elijah after parting waters of the Jordan River, walked across it with his successor Prophet Elisha before ascending to heaven on a chariot and horses of fire.

7. Watch Biblical history unfold – The UNESCO World Heritage Site of Umm Ar-Rasas ( East Jordan) is on the east of Madaba and it had been mentioned in both the Old and New Testament. Known for its spectacular ruins of churches and beautiful stone arches, it also has some very beautiful, well preserved mosaic floors.

8. Touch of the exotic – The Desert Castles ( East Jordan )built by the Umayyad Dynasty are not be missed if visiting Jordan. The most famous one, Quseir Amra is a UNESCO World Heritage Site and is renowned for the bath house erotic frescoes. Crusader’s too left their heavy presence and built magnificent castles at Karak and Shobak. Steeped in cruel history, exploring the underground grid of passageways of the Karak Castle (Central Jordan) is definitely one of the most thrilling things to do in Jordan. Jordan’s most historic city Salt (North West) is teeming with Roman, Byzantine, Mamluk and Ottoman history. As-Salt spreads in cluster over 3 hills and has yellow sandstone old domed buildings with arched windows and narrow winding hilly roads. It is a photographer’s paradise and the old city is definitely worth at least a day’s visit.

9. Give into nature – The Arab resistance against the Crusaders resulted in the Ajloun Castle ( North Jordan) set in the ecologically important and beautiful scenery of Ajloun Forest Reserve. It is close to Jerash and can be combined with Pella too. It is a lush pine forest tucked away in the rolling hills of north Jordan and has 13 square kilometers of Mediterranean woodland. Oak, olive, pistachios, wild strawberries and carob grow abundantly and has lots of birds, wildcats, jackals, wild boars, foxes and striped hyenas. The previously extinct Roe Deer had been successfully re introduced in this reserve and the Persian Fallow Deer can also be found here. There are quite a few beautiful hikes available at this reserve and the Ajloun Campsite located at the edge of the forest makes a great place to stay. Ajloun Forest Reserve is open from April to October and is very popular with both domestic and foreign tourists so prior booking at the campsite makes sense.

The Mujib Biosphere Reserve ( South Jordan) bordering the Dead Sea has one of the most dramatic natural beauty in whole of Jordan. It is home to many varied flora and fauna, including the rare Syrian wolf, Egyptian mongoose, caracal and poisonous desert snakes. The horned Nubian Ibex can be found in the higher reaches of Mujib’s sandstone mountains. There are several hiking trails available at this reserve and registered RSCN( Royal Society for the Conservation of Nature) guides are mandatory for these hikes. Campsites are available and can be booked at the visitor’s center.  Among the other lesser known but equally rich Jordanian nature reserves are Azraq and Shawmari (East Jordan). Located in the heart of eastern Jordanian desert, Azraq is a unique wetland oasis. It includes several natural and ancient built in pools, marshy land and mud flat which attracts hordes of migratory birds each year. Spring rains turn the entire area green and around 2,000 species of wild flowers bloom forth.

For nature lovers, Jordan is a delightfully unspoiled paradise. Dana Biosphere (Central Western Jordan), which is just 24 kilometers away from Shobak is Jordan’s largest nature reserve. It is both biologically and historically rich, with traces of Neolithic villages, ancient copper mines, Roman aqueducts and Byzantine churches found among its wilderness. It is highly diverse and the geology ranges from limestone to sandstone to granite mountains, lush hilly slopes, oak and juniper forests to scraggly scrublands and arid sandy deserts. It has some excellent campsites and guesthouses including the award winning Feynan Ecolodge. Several hiking trails are open and apart from a dizzying variety of birds (eagles, falcons, cuckoos, vultures etc) Dana is teeming with jackals, hyenas, wildcats, porcupines, hares, bats, hedgehogs, lizards, snakes, wolves, ibex, chameleons and fresh water crabs. More than 700 plant species have been recorded at Dana and recently 3 newly discovered plants have been found there.

Shawmari is a small reserve which was created to sustain some of the most endangered and rare ME wildlife. It is a breeding center which has a large herd of once nearly extinct Arabian Oryx, ostriches, onagers and desert gazelles. It also supports a rich variety of desert vegetation and the cute in house tourist shop sells locally made souvenirs like silverware, painted ostrich eggs and reed made products. Travelers with children have a great time at the Oryx safari trips. After long hot desert days, Hammamat Ma’in or Ma’in Hot Springs provide much deserving break. It is on the way to Dead Sea and is a refreshing desert oasis.

10. Lake, Sea and Deserts Trail – The Dead Sea (South Jordan) can be combined with a diving tip to the southernmost point of Jordan, Aqaba. Known for its super salty, mineral rich buoyant water and therapeutic black mud, floating/ taking photos floating/reading newspaper on Dead Sea is one of the must do things for all travel lovers. Although personally I hated the experience, Dead Sea is indeed like no other place on earth. It is easily accessible from Amman and has a huge range of accommodation facilities as well as Amman Touristic Beach(complete with changing rooms, swimming pools etc for day trippers). Aqaba is Jordan’s beach resort and offers some of the best diving and snorkeling in the world. There are huge stretches of unspoiled coral reefs and the Red Sea Marine Park in the Gulf of Aqaba has the amazing combination of colourful sea life, transparent water and warm, sunny weather. The borders of Saudi Arabia, Egypt and Israel are just 30 minutes drive from the city center of Aqaba.

The spectacular Wadi Rum (South Jordan) is also in the southern part of Jordan and staying at the Bedouin camp under the Rum starry sky is one of the most beautiful travel experiences in the world. Hiking, camping, hot air ballooning and micro light flying can be done here. Long excursions can also be arranged with the help of Bedouin guides but exploring Rum alone is dangerous (lots of poisonous snakes) and not allowed (Wadi Rum is a restricted area). Most popular Wadi Rum activities include jeep safaris, camel and horse rides. Don’t miss the barbecued lamb/zarb and sugarry, hot mint tea served at the Bedouin camps. Distant Heat, the international music festival is held every year in the red expanses of Wadi Rum and is not to be missed by any electronic dance lover. In 2009, the Biggest Electronic Dance Event was staged at Distant Heat. For more details check out www.distantheat.com.

It is extremely difficult to load up on all the Jordanian treasures in 1 trip. However careful planning can help you explore this beautiful Biblical country as much as possible. Keeping in mind, that Jordan is really tiny, it should not be very difficult. For maximum utilization of time and distance, it makes sense to prioritize your Jordan “things to do”. Once this is done, linking the places as per direction helps. You can always opt for off beat guest houses or campsites while traveling between 2 major spots, however knowledge of Arabic and own vehicle would make that much feasible. Pick and choose and explore this beautiful country or simply follow the King’s Highway. You cant go much wrong on that.

Some photos have been taken from the Internet.