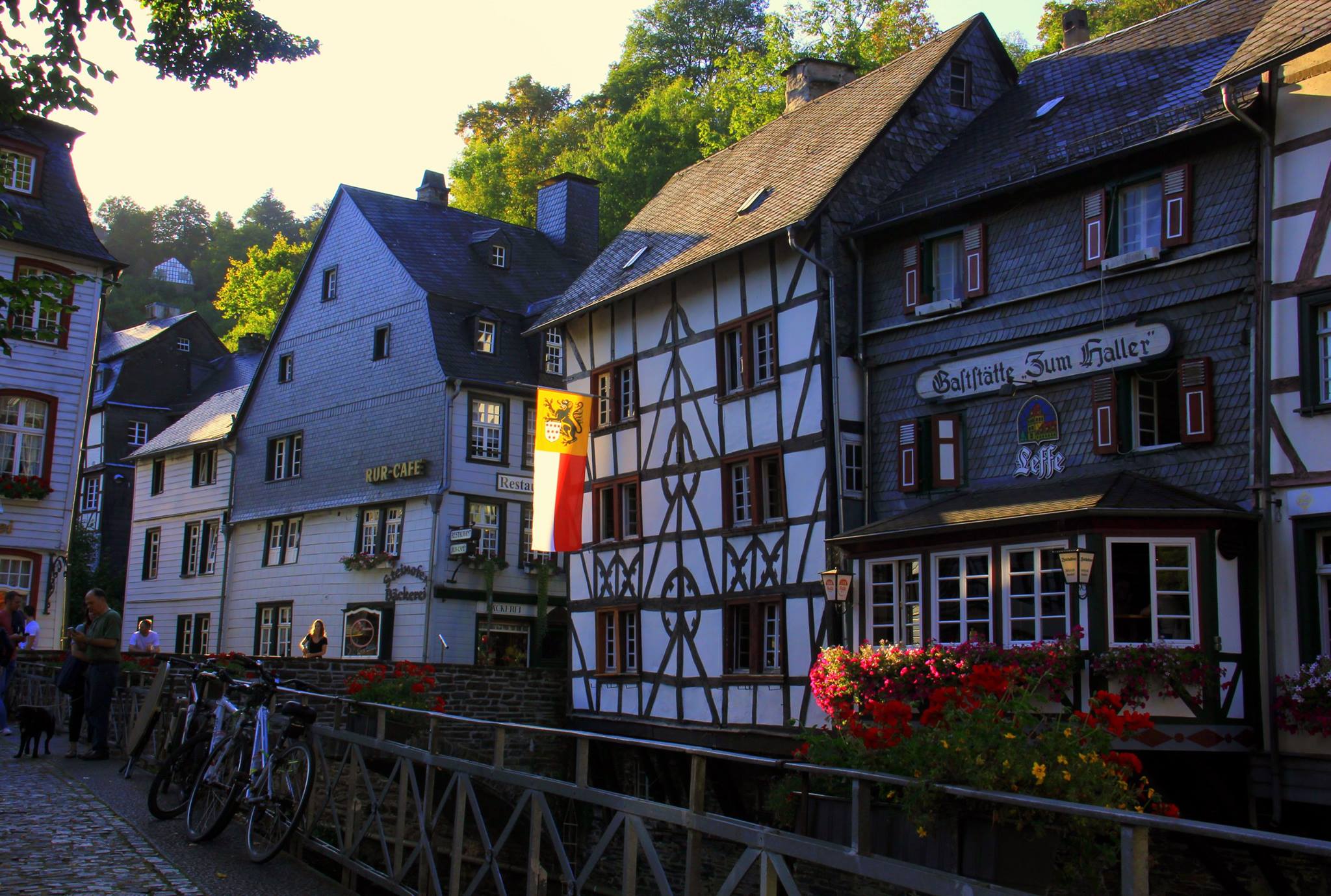 The pretty little town of Monschau

Monschau is a very pretty town. Traditional half timbered houses, winding cobbled lanes, blooming flower pots and picturesque bridges make it postcard pretty and the placid river Rur cuts through it. All around the lush Eifel National Park dons a deep green mantel and the sky above it is usually cornflower blue. Known for its famous Christmas Market, offbeat museums and incredible collection of historical buildings, Monschau is one of Germany’s most storybook pretty towns and definitely one of its best kept secrets. Tucked away among the rolling hills of north Eifel, Monschau sits near the German Belgian border and is just a 30 minutes drive from the historic city of Aachen. Being relatively unchanged since the last 300 years, Monschau offers a very pleasant ‘stepping back into time’ kind of a day trip option from Cologne, Aachen and Brussels. Reaching Monschau is no easy feat as the little town has no train connectivity and the best way to land up there is in your own car or motorcycle.

That is exactly what we had done on one lovely September day and it had been a great way to spend an idyllic family weekend. Early fall had tinged Eifel National Park with bright yellows and the sun had been warm and toasty. Clear skies had accompanied us the whole day and late blooming wild flowers had popped bright spots of colours. It had been a beautiful day to be outdoors and Monschau had never seemed prettier. Being a weekend, the little Eifel town had been a bit crowded and the happy locals had celebrated the end of summer with traditional attire, beer and marching band. Despite the crowd, the picturesque city center had been a feast for the eyes and the half timbered houses had been a jumble of colours. Monschau had looked breathtaking in the golden afternoon light and we had walked around the narrow alleys of the historic town till dusk had fallen. Centered around the picturesque Evangelical Stadtkirche, Monschau had been all about a little church, funny twisted half timber heritage houses, mustard museum, a castle, flower covered footbridge and the grand Rotes Haus or the red house.

You may like : The incredible mosaics of Aachen cathedral

Former home of the Scheibler, an entrepreneurial noble family, a pretty shade of red had rendered the name to their home office and they had once been famous cloth merchants of Europe. Fabric produced by them had been renowned throughout the continent and their potential clients had always been presented with books filled with small clippings of their cloth. The Red House had been recently turned into a small private museum and it had been just another interesting thing to do in Monschau. The historic Mustard Mill had been the other attraction along with the small castle which had pertly perched upon a hill overlooking the town. Both had provided great views of the snug little town and it had been no wonder that Monschau had been named “The pearl of the Eifel”. We had given most of Monschau’s listed attractions amiss and had simply strolled along the Rur River. It had been the most scenic part of the town and rows of half timber houses had added to its charm. The still mirror like river had reflected them on its glassy surface and the small water mill had tumbled merrily. With so much of quaint charm and loveliness around, we had not noticed time slipping by and it had been soon time to go home. Violet twilight, chirping of home coming birds and tolling of church bells had heralded evening and we had left Monschau with memories to last a lifetime.

TRAVEL TIP – Monschau is a popular holiday and excursion destination in the Eifel area. A visit to Monschau is definitely worth the time and it is great for winter sports like skiing, bobsleigh etc. The peak season for tourism is from late summer to early fall and on the last weekend in October, Monschau holds a big Halloween celebration. Christmas markets are held the four weekends leading up to Dec. 25 and the Eifel National Park is open year-round. The nearest train station is “Aachen-Rothe Erde” and regional trains from Cologne and other cities stop here. From the train station the bus no. 66, heading to “Parkhaus/Schmiede, Monschau” takes you near Monschau and the stop is at the “Flora Monschau”. From here the historic town center is a mere 300 meters walk. For self driven travelers, take the highway “A1” and exit at “Wißkirchen” (exit no. 111), from where you just have to follow the signposts. Parking at Monschau can be tricky and the paid garage at Rathausplatz is the best option.

There are many attractions in and around Monschau and the museums of mustard, photography and film, printing, glasswork, local history and culture and beer are the most popular. Additionally there is also a historic sawmill, the Monschau Castle and the Red House. The Red House is open for public and has an entrance fee of 3€ per adult. The late 18th century mansion has many interesting things to look at, out of which the massive wooden staircase is the most stunning. Winding all the way up to the 8th floor, the staircase is embellished with original wooden carvings which depict exact steps taken in order to process fine cloth. These guidelines were given to the artisans by the owner of the factory and the house, Karl Wilhelm Schiebler. Monschau is famous for its mustard production and the Mustard Museum offers 18 different varieties of the locally made delicacy. Other local specialties include the Dütchen, a type of biscuit filled with cream and fruit, Vennbrocken, a chocolate marzipan and Printen, a honey cookie.

Autumn calls for being outdoor

And that is why

We had headed for

For a family weekend getaway

Monschau had been charming

Famous for winter sports and

Time had seemed to

And we had spent hours amidst