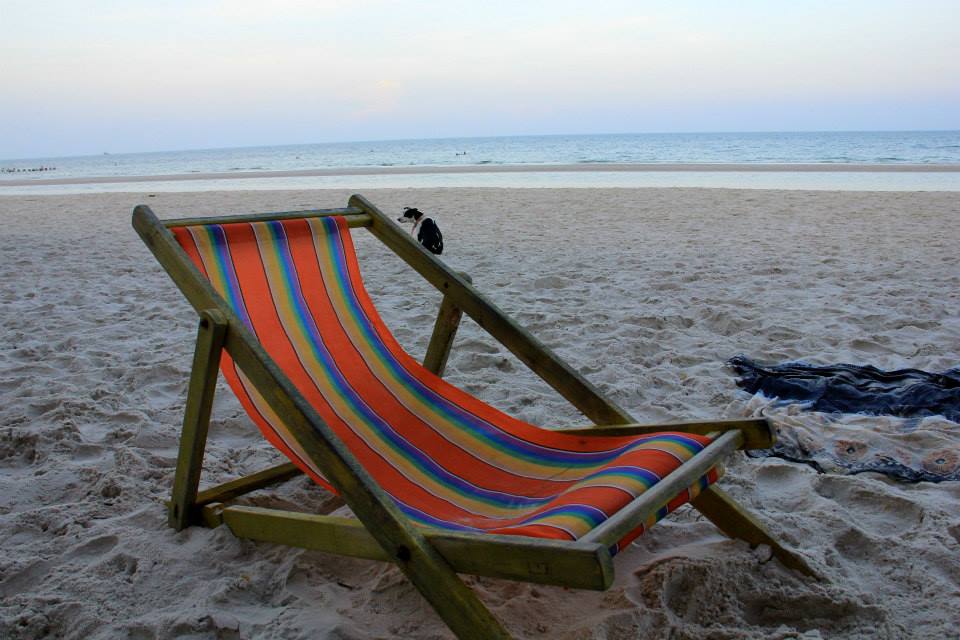 I stopped going to Pattaya, after I quit flying and opted for quieter destinations around Bangkok. Every traveler needs a place to hang up his boots for some time and rejuvenate, and Hua Hin became my well spring of peace. I always stayed at the same place, did the same things and spent my days sleeping, beach bumming and meeting up with friends.

Located in the northern part of Malay Peninsula, Hua Hin is very close to Bangkok (only 200 kilometers south) and buses ply at regular intervals from the basement of Suvarnabhumi airport via Cha’am to the city center. Accessible by train, plane, buses and cars, Hua Hin is a much preferred seaside resort of the Thai royal family (and Thailand’s oldest seaside resort) and Bangkok city owls looking for a weekend getaway. The road to Hua Hin is broad and smooth and the buses are comfortable, safe and value for money.

Hua Hin is not very cheap by Thai standards although it can be enjoyed on a sensible budget. It has quite a few high end hotels and resorts facing the beach, and an equally high number of family guest houses, B&B’s and home stays on the other side of the train tracks. It also has an admirable number of swanky hospitals, since the ailing beloved Thai King Bhumibol reside there for most part of the year. Hua Hin is home to a hefty number of expats who love its upscale clean environment, easy languid life and quiet pace.

Part of the Phrachuap Khiri Khan district, Hua Hin rose from a gentle fishing village status when in 1921 Prince Purachatra, director of the state railway built the Railway Hotel close to the beach. Before that it used be called Samore Riang (Row of rocks). This name was given in 1834, by a group of farmers from the drought riddled agricultural districts of Phetchaburi, who stumbled upon a small village tucked away on stretches of virgin white sands and rows of rocks. They settled in the village, naming it after the gleaming row of rocks. After the construction of the iconic Railway Hotel, Hua Hin became synonymous with Thai elite living.

In fact King Rama VII  loved the place so much, that he commissioned for the construction of Klai Kangwon (Far From Worries) Palace, which still remains an official royal residence. Although Hua Hin district is blessed with quite a few natural attractions, I never explored much beyond the charming city. It is one place where I always unwound, became almost a local and never felt much urge to do anything beyond that.

I stayed at the homey Donkey’s Rest hotel, took late breakfasts, sunned on the beach, cycled around post noon and painted or played guitar with my friends in the evening. A few late unoccupied Hua Hin evenings had seen me play bartender at my Canadian friend Leane’s pub and after too many beers, jam with the in house rock band. Nathan, Thomas and the boys were great fun and excellent musicians and Leane was an amazing hostess. More than once I had spent weekends at her place jamming with the boys of her band or all of us barbecuing with movie marathons. She never charged me for food or occasional accommodation and I always helped her at her pub.

Quiet Hua Hin evenings would take us to the beach, where we spray painted graffiti or kayaked and threw ball to the trio of beach puppies belonging to our artist friend, Thon. Weekends were always at the eclectic open air Cicada Market, where artists and artisans sold kitschy hand made stuff, B boys danced and lovely group crooned in a corner. Food, paintings and beautiful people shopping for Hua Hin’s famous hand woven cotton mingled headily there. Weekend dinners were nearly always at the traditional Thai restaurants at Khao Takiab bay, if not at one of the classy city brasseries by invitation. These wooden restaurants on stilts cooked squiggling fresh off the boat seafood by platters and we always ended up eating too much. Late night post dinner walks up to Khao Takiab were painful attempts to feel fit (after so much eating) and although it was a guarded Navy area, we used to chill out at its summit and count the twinkling lights of the boats in a distance. Thai Navy had 3 military ships always stationed in those waters and they blazed all night like Christmas trees.

Nights at Khao Takiab and Cicada Market were very pleasant, but somehow I never visited the hilly area during daytime. Also known as Chopstick or Monkey Mountain, it sits at one end of Hua Hin beach and close to Khao Singto (Lion Island). Khao Takiab guaranteed stunning views from the top as well as a much revered temple. Trip to Khao Singto was very popular with the locals and a lot of people snorkeled in its clear mirror like water. My weekday dinners before hitting Leane’s were always at a night market close to Donkey’s Rest. Like every place in Thailand, Hua Hin has 2 major night markets-Grand Market and Hua Hin Bazaar which sizzle, smoke, stir and steam till late hours and sell some amazing local food. However my favourite was near the Soi 67 and it was small, with a lot of options and within walking distance. Soi 67 is the cool, backpacker’s hangout area of upscale Hua Hin and it had a very family oriented, residential vibe.

In fact most of expats lived there and in tune with most of Hua Hin, sleaze was at bare minimum. It was there that I tried the fiery Isan cuisine for the first time and fell in love with it, and on rare early mornings, watched a train trundle along the flower lined tracks. The beach was my 2nd home and while not spectacular, it was clean and broad with soft white sands. Horses ambled on the beach, hippies played guitar and fishing boats unloaded its bounty at every sunset. Protected by rocky headlands with Khao Takiab at one end, Hua Hin beach is gentle, relaxing and just the perfect place to snooze your tires away. Hua Hin relaxed me and ever evening a gentle breeze urged me to walk till the historical Railway Station, sweat over small wicker cups of sticky rice, bamboo salad and snake fish soup and head over to Leane’s for bar tending, music and gossip.

Only once did I venture to Khao Tao (not to be confused with the island), around 13 kilometers away from Hua Hin city. The drive was very pretty with nurseries lining the highway and forested swampy patches, masses of blooming bougainvillea and frangipani colouring it brilliantly. Kite sellers sat lonesome with their huge colourful kites strung to bamboo scaffolding and pineapples were sold from roadside heaps. Khao Tao which literally means Turtle Hill, has a small fishing village, few very good local seafood restaurants, a very pretty lake and a hilly road forking out to secluded beautiful beaches. I spent my day by the warm, green water of Hat Sai Noi (small sand beach), before driving inland for Hat Sai Yai (big sand beach). While Hat Sai Noi was a just a lovely crescent of soft sand with curving headland and lots of privacy, the big sand beach was smoother, had clusters of fishing boats bobbing along with the hilltop Wat Tham Khao Tao.

I gave the shrine amiss, gazed at Hua Hin dotting the horizon and listened wide eyed about the story of the Bra beach. In the Brassiere beach in the Khao Sam Roi Yot area, spirit houses were built to appease the wandering soul of a fisherman’s daughter. According to legends, she was killed, torn to pieces and her breasts thrown into the sea, since she was desired by too many men. Still now locals hang brassieres in the spirit houses for good luck and while it was very intriguing, a spooky Malay travel experience made me stay away. I chose to return to Donkey’s Rest, relax and enjoy a pleasant repeat of the day before.

Those were very pleasant, contended days and I eagerly look forward to my next Hua Hin visit. Strangely, in spite of being in a foreign destination, Hua Hin became almost home and a very private non traveler, part of my life. People make places and I had left my heart back with my friends there. In fact last year I had lingered there long enough to spend the Christmas and New Year’s Eve with them. I had welcomed a brand new 2014 on the silky sands of Hua Hin beach amid a pleasant chill, fireworks and the ever gentle sea. It had been an amazing start which lead to an equally beautiful Hua Hin year. It eased my tires And made me deliriously contented

Except for a brief visit to