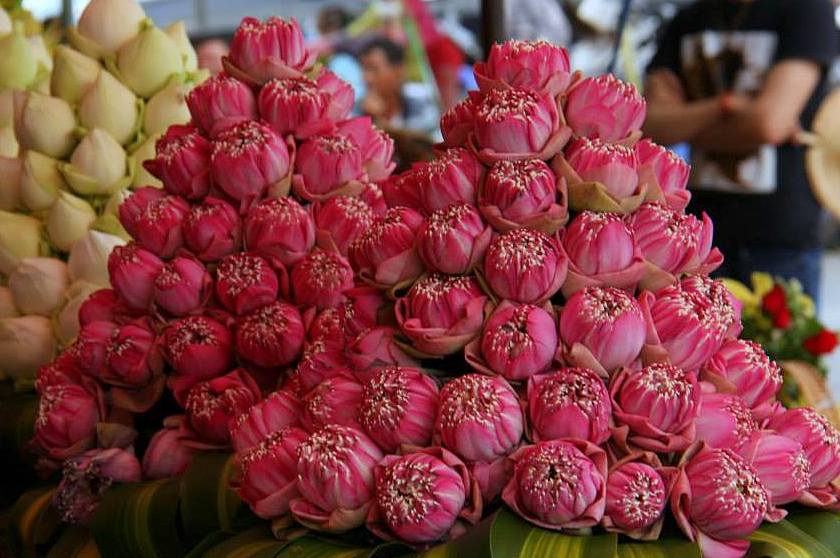 My first brush with Phnom Penh had occurred many years ago, when my father had to go there on a business trip. I remember spelling out loud the complicated sounding name on the airline ticket and spending a considerable amount of time, trying to figure out on how to pronounce it. Later, this mellifluous name had conjured up many fairy tale notions in my silly little girl‘s head and once in not so recent past, on a long bus journey, I had sat next to a BBC reporter who had been posted in Phnom Penh. He had been a blabber mouth, who loved to talk, had a hyper active imagination and fondness for exaggeration. Thus, hours had flown as he had spun yarns of tales with his mouth and mind and I was still very green in my job to realise that they were not quite the most apt representations of the city. Thus, in my mind, Phnom Penh became extra larger than life and despite, Cambodia being one of my most visited countries, I somehow always ended up avoiding it. This may have stemmed from an imaginary intimidation and it was only a few years ago, that I decided to visit Phnom Penh on a mini break. That was the first time I was ever going to the Cambodian capital and as luck would have it, the tour ended up with me getting married.

Though, not exactly a continuous stream of events, it all started in Phnom Penh and I hold the busy, chaotic Khmer city very dear to my heart. Though, quite overlooked by the Cambodian tourism circuit travellers, Phnom Penh has a few surprises up its sleeves and the city has a lot of character. It is typically Asian, with its chaotic whirr of traffic, pulsating, gritty life and exotic local flavours. This blend results in being an assault on the senses of especially the Western travellers, but it is not without an addictive typically Asian charm. Phnom Penh‘s skyline is an exciting hodgepodge too and glimmering spires mingle seamlessly with delicate colonial French architecture and squat ugly modern buildings. Many art deco buildings come in various states of disrepair and the mighty Mekong silently soothes the residents. The great river is the mainstay of the city and its promenade is one long strip of local Khmer life. Swish restaurants, grimy street food sellers, backpackers‘ hostels, flower sellers, busy temples, silent saffron robed monks, sports bars, prostitutes, beggars, Khmer families and tuk tuk drivers thrive on it in equal measures. Asia weary foreign travellers seek solace by its banks and tired locals shoot some breeze there at the end of their long days.

My best Phnom Penh memories are by the bank of the Mekong, in a moonlit pool and at its numerous hip bars, cafes and restaurants. It is one of the most upcoming cities of Asia and there is something about the city‘s vital charm, that literally begs you to fall in love. I had dutifully crashed headlong into love in Phnom Penh and even today, the prospect of visiting the city delights me to the core. For me, Phnom Penh will forever be synonymous with the grand Royal Palace, gritty Russian Market, shimmering flat Mekong, an adrenaline rush for survival and a very beautiful face. It is a city which has given me some movie like romantic moments and the upbeat, unobtrusive locals have unknowingly contributed to the unforgettable affair. Though, strictly from a traveller‘s perspective, Phnom Penh does not offer much other than some exceedingly restful local moments, it is a place which most visitors find hard to leave or not come back.

I could go on about Phnom Penh endlessly, but would rather let the photos now to do the talking. Though, absolutely not my best travel photo collection, these pictures represent Phnom Penh through my eyes and in reality are more of my days spent there. Gritty, regular, swish and uniquely Asian, for Tarek and me, Phnom Penh will always be a good idea.

And an assault to the senses,

An explosion of colours

And struggle for survival.

Phnom Penh will always be a good idea.