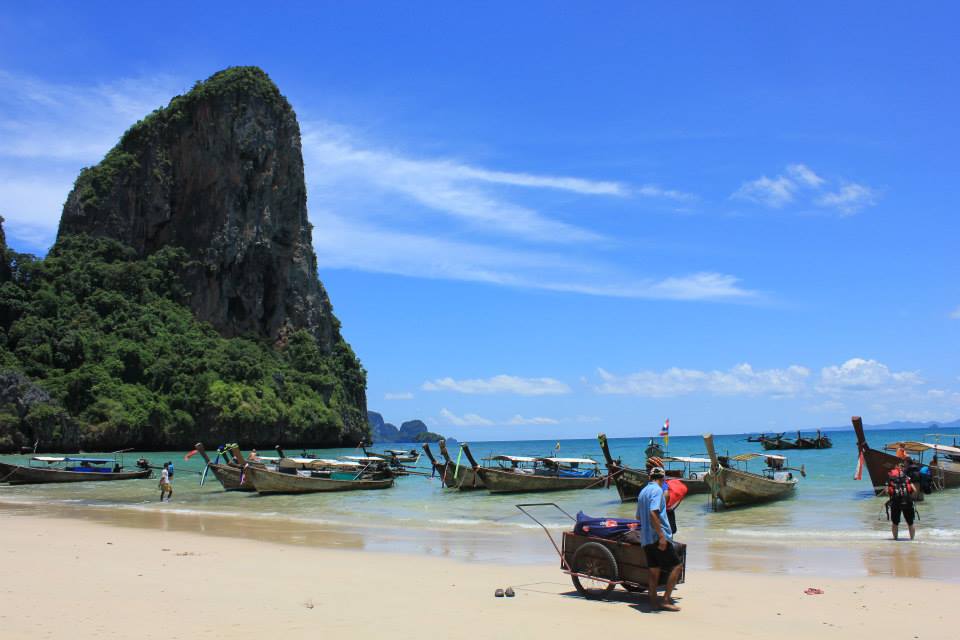 Krabi had happened as a solo traveler and it remains till date one of my most memorable journeys. Although Phuket is closer to my heart for personal reasons, I cannot deny that Krabi is undoubtedly Thailand’s most beautiful province. Hugging the southern coast of Thailand, Krabi is a popular beach destination at the stunning Andaman Sea. Famous for white sandy beaches, hidden lagoons, crystal turquoise sea, rainforests, waterfalls, sea gypsies and colourful colonies of coral, Krabi is any beach lover’s paradise.

Dramatic limestone mountains jutting out of the sea, labyrinthine islands forming the most most picturesque bays and national parks teeming with rich marine life make Krabi’s beauty irresistible. Even though it was one of the worst 2004 tsunami hit provinces and suffered crippling losses, but the postcard perfect beautiful archipelago of more than 130 islands still draws huge number of tourists throughout the year.

Krabi town is the center of this archipelago and most hotels, resorts and facilities are based here. Neighboured by Phang Nga, Surat Thani, Trang, Nakhon Si Thammarat and Phuket provinces, Krabi is a hub of famous, colourful long tail boats which bob the turquoise water of Andaman Sea zipping in and out of the numerous gorgeous islands. Accessible by train (nearest train station is Trang, which is 2 hours away), long distance buses (available from Bangkok’s Southern Terminal), cars and flights, multiple ferries also ply between Phuket and Ao Nang beach( Krabi). While many people choose Phuket over Krabi for overnight stays, they always make numerous day trips to this province to explore its impressive natural attractions.

I had flown into Krabi, one breezy March morning and was immediately taken in by its lush green beauty. A jewel of a place, it resembled a precious large emerald encrusted in the sapphire water of Andaman Sea. It was 10 in the morning by the time I landed there and immediately got overpowered by Krabi’s sticky, coastal heat. Although the supposedly best time to visit Krabi is between November-April, when the area gets dry North easterly winds and clear skies, do expect muggy sticky coastal heat throughout the year. The airport was a bit far from the Ao Nang beach, where I was staying and surprisingly the ever present songthaews (public pick up vans) and taxis could not be found.

Thankfully a kind Swedish couple gave me a lift and I chatted with their son, Jan who called Krabi his home, all the way to Ao Nang beach. Owner of the lovely Nadivana Serviced Apartments, Jan had been living in Krabi for years with his Thai wife, 3 beautiful children and seemed reluctant to go back home. He was one of those thousands of expats who happily call Thailand their home and spoke yarns of the paradisaical charms called Krabi. He dropped me off to my hotel, promised to show me around and gave me valuable “local” fun things to do in Krabi tips.

My hotel was nice with lots of frangipanis, a glittering pool and spacious airy rooms. A cool refreshing welcome drink and slices of dewy fresh fruits made my day and I napped in my room till noon. Lunch was a simple affair by the pool-egg fried rice with sweet and sour chicken topped with a tall sweating glass of pineapple juice. Post lunch I pored over books about Krabi region and slowly created my itinerary.

Once a part of the powerful ancient Malay kingdom of Ligor, which stretched all the way to Georgetown, Malaysia, Krabi means “sword”. It is believed that an ancient sword was unearthed in that province prior to the founding of the city, which gave rise to its name and seal emblem. Home to many limestone hills with beautiful stalagmite and stalactite caves, archaeological findings of pre historic rock paintings, stone tools, pottery and bones in Ao Luek district and in Lang Rong Rien cave prove that Krabi housed one of the oldest human settlements in SE Asia.

Initially administered from Nakhon Si Thammarat, it later became a direct subordinate of Bangkok and turned into a province in 1875. In 1900  the governor moved the administrative seat of the province from Ban Talad Kao to its present location at the mouth of the Krabi river, thus founding the present day Krabi town. Mostly an agriculture based province rich in rubber, palm oil and oranges, majority of Krabi’s populations are Muslims, Buddhist Chinese and Moken or indigenous sea gypsies.

Gentle, soft spoken with a thick Southern dialect, Krabi inhabitants are one of the most open minded people in Thailand. Perhaps it is due to the incredible more than 2 million tourists who visit Krabi every year or the cultural assimilation which goes way back into time, the heavy Indian and Chinese influence can be felt in nearly everything. The cuisine, performing arts and handicrafts (Krabi makes some awesome batik at a cheaper price than neighbouring Malaysia, from where it originated) all reflect a beautiful cultural blend of Indian, Chinese, Malay and local Siam styles.

Like Pa, a popular adapted play, tells the story of an Indian merchant from Calcutta who married a local girl and the shadow plays too depict mythological tales from India. Krabi food keeping the spiciness of Southern Thai cuisine alive, is fiery with mostly Indian style Muslim curries, popular in Malaysia, Indonesia and India. Massaman curry, Khanom chin (rice noodles in fish curry sauce) and Khao mok kai (chicken biryani) are indigenous Krabi dishes along with heavy helping of unique seafood preparations. Although there is no dearth of restaurants and food courts in Krabi, however like every other part of Thailand, best and most authentic local food are found at vendors selling from push carts, village restaurants and markets.

With so much to do, explore, eat and experience, honestly speaking my Krabi days were too packed to be relaxing. I wanted to see it all, do everything and try my hand at all possible activities Krabi had to offer. Sea kayaking, beach bumming, snorkeling, scuba diving, island hopping, caving, jungle trekking, rock climbing, bird watching, fishing-it was a potpourri of too many options. But on my first day I wisely just lazed by the pool, caught a beautiful sunset and walked along the crowded Ao Nang beach. It was a brief much needed respite before the action that was to follow.

And its awesome culture