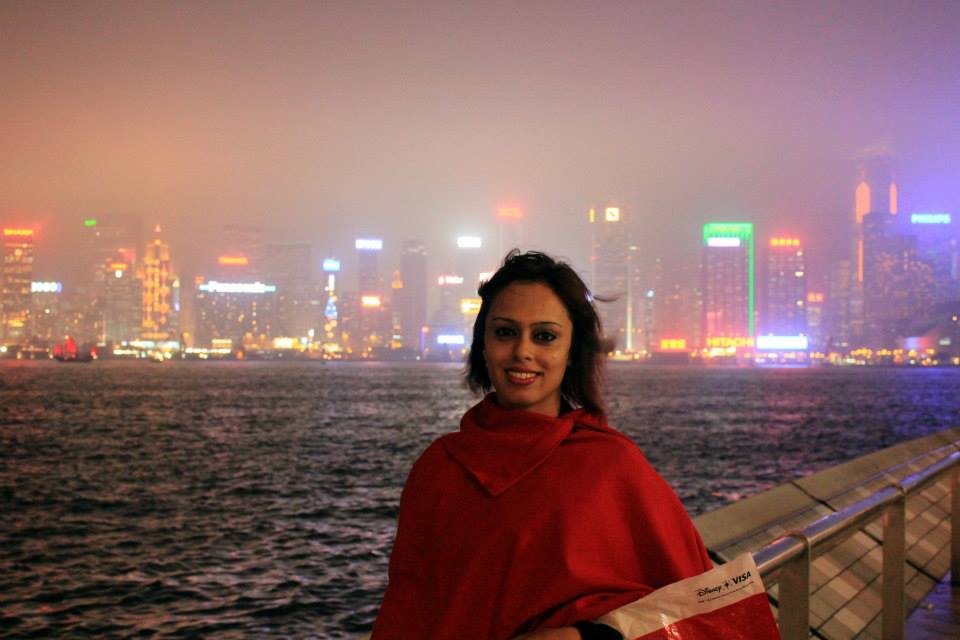 A cat and mouse chase in HongKong

My daughter Noni was very young when we visited together to Hong Kong and even though it was an expensive trip, we had a great time. She was and still is into that age when world revolves around Mickey Mouse, Barbie, Doramon and cute furry creatures. We had repeatedly visited HK Disneyland with the hope of enjoying it without the rainstorm which had accompanied us from China, but did not quite make it. So unfortunately everytime we went there (thrice in 5 days), all we did was shop, eat and try giving her a Disney Princess makeover. The makeover did not happen either since we had not registered or booked online and there were too many little girls ahead of us as princesses in waiting. So we had shopped even more and once watched the Rainy Day Parade.

Built on reclaimed land in Penny’s Bay, Lantau Island, HongKong Disneyland is the first theme park located inside the  HongKong Disneyland Resort and is owned and managed by the HongKong International Theme Parks. Together with Ocean Park HongKong, it is one of the two large theme parks in HK. The park consists of seven themed areas: Main Street U.S.A, Fantasyland, Adventureland, Tomorrowland, Grizly Gulch, Mystic Point and Toy Story Land. A very cute Disney themed MTR took us and huge bunches of little families to the park and the carriage was filled with over excited children, hassled mothers, crying babies and crowded perambulators.

It was raining heavily by the time we got off the MTR (HK to Tung Chung, where we changed train for Sunny Bay, the MTR station for the park) and the surfing Mickey on Moby Dick, looked sadly uninteresting. The professional helpful staff in cute costumes perked up my little Noni and we gleefully went on a park tour. It was disappointingly small and provincial in comparison to its counterparts, but my daughter loved it. We dined at one of the overcrowded food courts, gorged on cute cupcakes, took photos with Mickey and tried making unsuccessful appointment at the Bibbidi Bobbidi Boutique for my princess’s makeover. Finally after our third attempt, we gave up and settled for the Rainy Day Parade instead. A little electrical train carriage drew Winnie the Pooh, Tinkerbell and host of childhood friends and it was not too bad.

TRAVEL TIP-Prior planning to HK Disneyland saves money and guarantees appointments at the princess makeover boutique. There is an awesome Disney theme hotel where the guests get to meet and interact with their favourite Disney characters. Coupled with discounted Disneyland package, it creates the perfect vacation for your little one.

The Ocean Park was more interesting with bigger space, better rides and really unique collection of animals. Although the adorable Pandas were hands down the star attractions, there were beautiful aquariums, Polar animals enclosure and an aquatic show with dolphins and seals. We rode up the Ocean Express and both of us having little vertigo issues, gave the fantastic cable car amiss. The funicular railway system (Ocean Express) took us from the Summit to the Waterfront and the supposed to be multimedia effects for underwater travel experience was fun. We spent a long time at the park and Noni participated in learning to take care of the animals in a special program meant for children. It was a great initiative taken by the park authorities where children participated in fun zoo keeping sessions with the animal keepers.

No HongKong trip is complete without a visit to the Peak Tower by the famous Peak Tram. Locally known as The Peak, Victoria Peak is a mountain in the western half of HK Island. With an altitude of 552 m (1,811 ft), it is the highest mountain on the island and since 19th century, prominent European residents chose the Peak to build their residences because of its panoramic view over the city and temperate climate.The early residents reached their homes by sedan chairs, which were carried up and down the steep slope of Victoria Peak. Between 1904 and 1930, the Peak was dedicated as an exclusive non Chinese residential area and even today the Peak is an upmarket residential area, although racial segregation does not happen anymore.

The funicular Peak Tramway carries tourists and residents to the upper levels of HK Island and offers the most direct route and outstanding views over the harbour and HongKong skyline. Inaugurated in 1926, Peak Tram was divided into three classes, first class for the British colonial officials and residents of Victoria Peak, second class for British military and the Hong Kong Police Force personnel and third Class for “other” people and animals. It was an unique experience (although I found it a bit slow) as our Tram glided up the steep slope of Victoria Peak and Hong Kong skyscrapers slid past our window at impossible angles.

The anvil-shaped Peak Tower and its magnificent city views from the top are uniquely HongKong and it also offers great dining and shopping experiences. It houses a really below average Madame Tassaud’s Wax Museum as well and over priced souvenir shops. However it is the view which makesThe Peak one of the most popular attractions in Hong Kong. During the day the panorama spreads all the way across sparkling skyscrapers and Victoria Harbour to the green hills of the New Territories. We reached there a bit late after signing customary letters to the future at the Peak Post Office and fell in love with HongKong all over again. Sunset dissolved HK city in glorious pinks and oranges, but the night unfurled an entire man made galaxy of dazzling lights underneath our feet. In a view fit for a queen, my daughter sparkled like a princess sheathed in jewels. It was the most memorable evening of my life and needless to say, the highlight of all my Hong Kong trips.

Those were very fragrant days

When Noni and I

And had loads of fun

It was Christmas time

And there were lots of festivities

We had a great

At The Peak Tower

Which were our HK highlights

Gave us a whale of a time