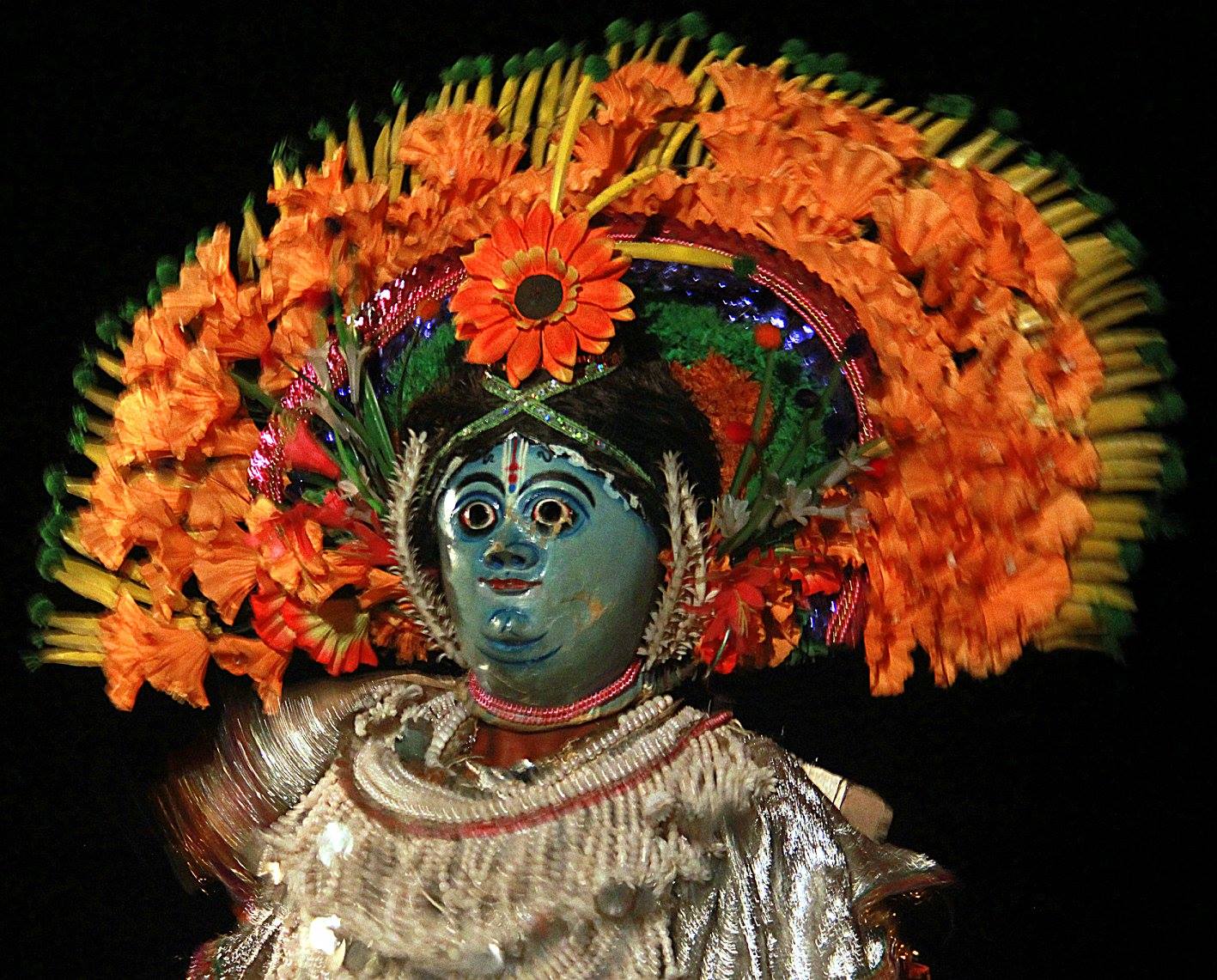 Whenever I close my eyes and think of Purulia, all I see are undulating fields, soft rolling hills, verdant forests, splashing waterfalls, quaint tree shaded villages and red earth rural lanes. However, none of them are as poignant as the memory of the region‘s famous Chhau mask dance performance and the stomping beats of the dancers still resound inside my head. That was my first and only live performance experience of Chhau and I had stumbled upon the iconic dance through a television advertisement. Chhau and Purulia have been synonymous for ages and the vivacity of the advertised dance had taken my breath away. It was filmed against a backdrop of palash trees bursting with red flowers and the scene had been breathtaking. Red dust had risen from underneath the acrobatic steps of the dancers and their dazzling masks had quivered with motion.

In real life, the Chhau dance performance had taken place at night and it was in the middle of cold January. The night sky had been cloudless and the twinkling stars had seemed to shiver. A light mist had veiled the harvested fields and a dense black darkness had pooled around the open air arena. The performance had taken place on the fields in the glaring light of a multitude of halogen lamps and somewhere a train had chugged past noisily. I had sat huddled among groups of villagers who had come to watch the show from nearby villages and accompanying musicians had played from one corner. I had not known what to expect when dancers bearing huge masks had come bounding into the makeshift stage and they had leaped, pounded, somersaulted and stomped to the rhythm of the music. They had depicted many snippets from Indian mythologies and despite having huge masks on, had expressed emotions through their movements.

Purulia can do wrong

Strangely enough, I found Chhau to be extremely expressive and the dancers‘ seemed to have mastered the art of depicting through their body language. Anger made the huge masks to shake furiously while tranquility made the dancers sway softly. It had been a very impressive performance and I had been awestruck by the agility of the Purulia Chhau masked dancers. A UNESCO World Heritage dance, Chhau originated in Purulia district of West Bengal in India. It is a form of tribal dance that incorporates martial arts into its movements and many scholars believe that the name Chhau is derived from Chhauni‘ which means military camp. Chhau dance movement includes mock combat techniques, stylized gaits of birds, animals, and gestures modeled on the chores of rural housewives.This tradition performing art enacts stories from epics like the Mahabharata and Ramayana along with local folklore. Chhau dance has three distinct styles which hail from the regions of Purulia, Seraikella and Mayurbhanj and masks are used by the dancers of the first two. It is usually performed in open air and especially during regional festivals like the Chaitra Parba.

Mainly taught to and practiced by male dancers from traditional families of artists, music plays an integral part of Chhau. Folk melodies played on reed pipes and accompanied by drum beats dominate Chhau‘s musical ensemble and it brings together people from different social strata, beliefs, and professions. That night in a remote village in Purulia the reverberating drum beats had drawn me to the Chhau masked dance performance and till today, it remains one of my most unforgettable travel memories.

And then there is the Purulia Chhau dance.

Purulia Chhau Dance is accompanied by Dhol, Dhamsa (drums) and Shehnai (Indian clarinet). Costumes play major roles since Purulia Chhau dance is known for its elaborate headgear and frills. Apart from the masks, dancers wear colourful long shirts with dhotis (Indian flared trousers) and vast amount of costume jewellery. The masks worn during Purulia Chhau performance are used to convey emotions and the nature of the character. The rest is depicted by extravagant and energetic body movements. Nowadays, Purulia Chhau masks are very popular as souvenirs and the village of Charida in Purulia is famous for this exquisite art work.

The story of the Purulia Chhau dance mask

Creating the masks require participation from all the household members and the process includes procuring the river clay (also known as antel maati), painting, drying and making the headgear that goes with the masks. Purulia Chhau dancers enroll into this art at an extremely young age and this number is diminishing every day. Though once much patronized by royal families and British governors, this over a century old dance form is dying a slow death. Lack of worthy recognition, financial support of the artists and growing daily expenses have weaned students away from Chhau and over the years, it has become more theatrical than a dance form. However, due to the popularity of the Purulia Chhau masks, many artists continue to live off this dance form and here‘s hoping that this will lead to the revival of this iconic masked dance of eastern India.

Purulia is a large district and there are many places to visit. I was a guest of Chowburu Tourism and explored places near Baghmundi. It is a homestay and travel consultant company which specializes in small treks to Ayodhya Hills, Dolma Hills, visits to the forests, Chhau mask artists‘s homes and tribal villages. They also organize day trips and Chhau mask dance performances. You can contact Chowburu‘s Sujit Chandra Kumar via email (chhowburu@gmail.com) or call +91-9732294515 to make a reservation.

The huge masks and headgears

While the dance is iconic

Don’t forget to buy one

Its your piece of legendary Purulia.