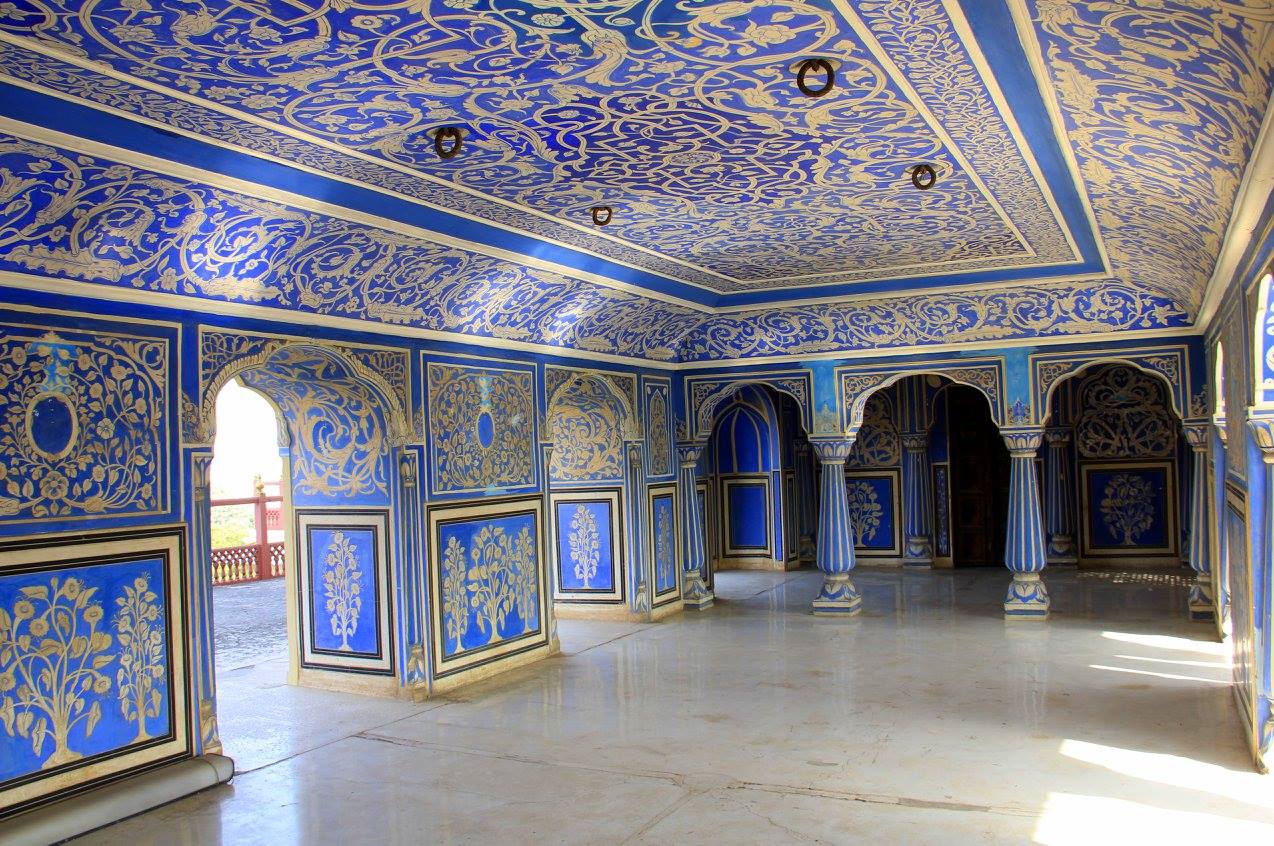 The City Palace Jaipur is impressive. A striking blend of Rajasthani and Mughal architecture, it is a complex of courtyards, gardens, and buildings. Standing right in the heart of the Old City, the magnificent palace was originally built by Sawai Jai Singh in the 1720s and was enlarged and adapted over the centuries by his successors. It is said that the talented king himself planned and built the outer walls. The grid-like urban layout of the city and its structures, however, were creations of the architects Vidyadhar Bhattacharya and Sir Samuel Swinton Jacob along with the keen architectural enthusiast Sawai himself. Being a traditionalist with a keen eye for Western finesse and modernization, he instructed for a blend of both and the two architects skillfully incorporated a fusion of Indian architecture with Rajput, Mughal and European styles. The result is the exquisite City Palace and we have once spent a lovely warm autumn afternoon exploring its grandeur.

The pink city of Jaipur

Since the royal family still occupies a part of the complex, using the grand Tripolia Gate on its southern side for formal occasions, the visitors enter the City Palace Jaipur complex through a modest gate on the eastern side and it directly opens into the first of the two main courtyards. The square pink-walled courtyard has the elegant Mubarak Mahal standing in its center and the erstwhile reception hall boasts of the palace museum’s impressive textile collection. Housing some of the elaborately embroidered and brocaded garbs that formerly belonged to the royal wardrobe, it is a very charmingly intimate museum and sharply in contrast with the nearby Armoury.

The royal arms museum of City Palace Jaipur has one of the finest collection of its kind in Rajasthan and the array’s beautiful decorations belie their blood-curdling purpose. Snuggled between the Armoury and the Diwan-i-Am art gallery, is the open courtyard known as Sarvatobhadra which holds in its center a beautiful pink-and-white, marble-paved gallery that was once used as the Diwan-i-Khas (Hall of Private Audience). In olden times maharajas used to consult their ministers there and today display of 2 enormous silver vessels proudly declare the devout Hindu Maharaja Madho Singh II’s quirk of carrying holy Ganges water to England for Edward VII’s coronation in 1902.

Jaipur because of its royal past

Has pomp and grandeur

The pomp and grandeur of City Palace Jaipur are very much on the face and although not ostentatious, the opulence does take a toll on the senses. The bedazzling display of weapons, clothes, furnishings and royal quirks overwhelmed us as well and we took breaks in the glorious gates of the Pitam Niwas Chowk. Apart from the intimate glimpses seen on the Royal Grandeur guided tour, we found the Pitam Niwas Chowk gates to be the most beautiful features of City Palace and dedicated to the four seasons, the Ridhi Sidhi Pol (as they are collectively known) took our breaths away.

The iconic gates of the four seasons

Adorned with themes representing the four seasons and Hindu deities, the gates are located in the inner courtyard and they provide access to the private Chandra Mahal. The Northeast Peacock Gate with its emerald coloured motifs of peacocks on the doorway represents autumn and it is dedicated Lord Vishnu. The continual flower and petal pattern of the Southwest Lotus Gate signify summer and it is dedicated to the Shiva-Parvati. The green Northwest Gate dedicated to Lord Ganesha is suggestive of spring and the repeated flower patterned Rose Gate represents winter. Dedicated to Goddess Devi, it is a visual delight and it is no wonder that the gates have become synonymous with City Palace.

Though extremely beautiful, the Ridhi Sidhi Pol was not the only wow factors of the City Palace and the whole complex is a potpourri of beautiful art and architecture. From magnificent chandeliers, intricate jharokhas, gorgeous rose pink walls, and carved traditional overhanging balconies, everything reeks of great aesthetic sense and the Jaipur royals were indeed patrons of excellence in art. Their taste in the art have been as dramatic as their family history and the Royal Grandeur tour provides eye-opening glimpses of the private lives of the dynasty. Conducted by a palace staff, the tour took us to the private quarters and we explored the Chandra Mahal, Sukh Niwas, Chhavi Niwas, Shobha Niwas, Sri Niwas and Mukut Mandir with great voyeuristic delight.

A peep into the Chandra Mahal

Crowned with commanding views of the city, the seven-storeyed Chandra Mahal has each floor named specifically according to the purpose and the grand building contains many unique paintings, mirror work murals, floral decorations and family heirlooms. Equipped with ramps (for easy movement of queens draped in heavy royal garbs) the Chandra Mahal also has a very private museum displaying the family’s carpets, precious manuscripts and other items for personal use. The screened balconies and rooftop pavilion show sweeping views of the entire city of Jaipur and it is set against a decorative lake and landscaped gardens.

The blue shades of the Sukh Niwas

The Chandra Mahal was indeed a treasure trove of artistic beauty and we loved the gorgeous blue Sukh Niwas or the Hall of Rest. Painted in Wedgewood blue and decorated with white lining, Sukh Niwas is used as the drawing and dining space of the Maharaja. Fully ornamented with Mughal miniatures, silver and glass tables, it is breathtakingly beautiful in the filtering sunlight. The aura like sunshine pouring in through the balconies often create ripple like shadow patterns on the blue room and makes one feel like being submerged in clearest of the seas.

The Rang Mandir on the third floor of Chandra Mahal is a room full of mirrors and the Shobha Niwas on the fourth floor is known as the Hall of Beauty. Completely decorated with mirrored walls, Shobha Niwas too sports blue tiles which are designed with mica and gold leaves. The Chhavi Niwas or the Hall of Images on the 5th floor is a monsoon retreat of the Maharaja and the elegant Sri Niwas takes up the 6th floor. The crowning Mukut Mandir (rooftop temple) gives away breathtaking views and the city stretches unhindered until the hazy Aravalli Hills in the horizon.

The life of the have-nots around City Palace Jaipur

The crowning glory of Mukut Mandir

Our glorious autumn day in Jaipur that year ended at the Mukut Mandir and it was a moment to remember. With a toasty sun warming our backs, we squinted as far as we could see and all around us Jaipur spread like a mirage. The higgledy-piggledy Jantar Mantar poked out in sharp angles and the city twisted and turned around the breathtaking Hawa Mahal. The Old City heaved with humanity, setting off layers of audible murmur and smoke from vehicles, homes, factories and burning dreams rose like genies. The afternoon sun made Jaipur shiver and ripple silvery haze and the city was like a sea of dusty pink.

Flat open roofs of the neighbouring houses displayed the daily lives of the less exalted and from our imposing Mukut Mandir position, we watched people drying laundry, flying kites and grinding the vast amount of spices on stone mortars. Older people in neon coloured traditional clothes lounged on wooden beds in the sun and they seemed as old as the mildewed buildings they were residing in. Steeped in tradition and orthodox to the core, they are the pulse of Jaipur and the ones who still recall with misty-eyed pleasure the city’s glorious royal past. It is because of them, that Jaipur is such a fantastic mix of swanky and vignette traditions and the City Palace is what it is..an epitome of beauty, grandeur and rich old days of kings, queens, and happily ever after.

Jaipur is a city of

The complex in a nutshell

The City Palace Jaipur is one of Jaipur’s premier landmarks and a “must visit place”. A complex of courtyards, gardens, and buildings, its architectural style reflects Rajput, Mughal and European influences. It is famous for its opulent gates and the popular ones are the ‘Udai Pol’, ‘Jaleb Chowk’, ‘Tripolia Gate’ and ‘Virendra Pol’. These are all richly decorated and the Palace has been designed in ‘grid pattern’ and houses various structures such as, ‘Chandra Mahal’, ‘Mubarak Mahal’, ‘Diwan-I-Khas’ and the ‘Govind Dev Ji Temple. The walls and gates are ornately designed in Mughal style and decorated with murals, lattice, and mirrors.

The ticket to foreign nationals is a composite ticket which also includes entry to Jaigarh Fort in Amer. Student concessional entry ticket is provided only upon production of valid authorized identification. Indian visitors are granted concession on 26th January (Republic Day) and 15th August (Independence Day). A composite ticket which clubs City Palace with other Jaipur attractions is also available and it is valid for 3 days. Do check out this option before buying an individual ticket.

Golf Cart facilities are provided at City Palace upon request at Rs 150 and the Royal Grandeur Tour costs Rs 2000 (Indian) and Rs 2500 (foreign nationals) respectively. This tour comes with an official palace guide, light refreshments and provides glimpses into the private quarters of the royal family. For more information check out the official website of City Palace, Jaipur. There is a cafe inside the City Palace where the visitors can enjoy some coffee, cakes and use restroom facilities.

On a warm autumn afternoon

It was a beautiful day

The City Palace was

Was a visual treat

And its intriguing past

Made a beautiful afternoon,

The complex of courtyards,

Was the perfect place