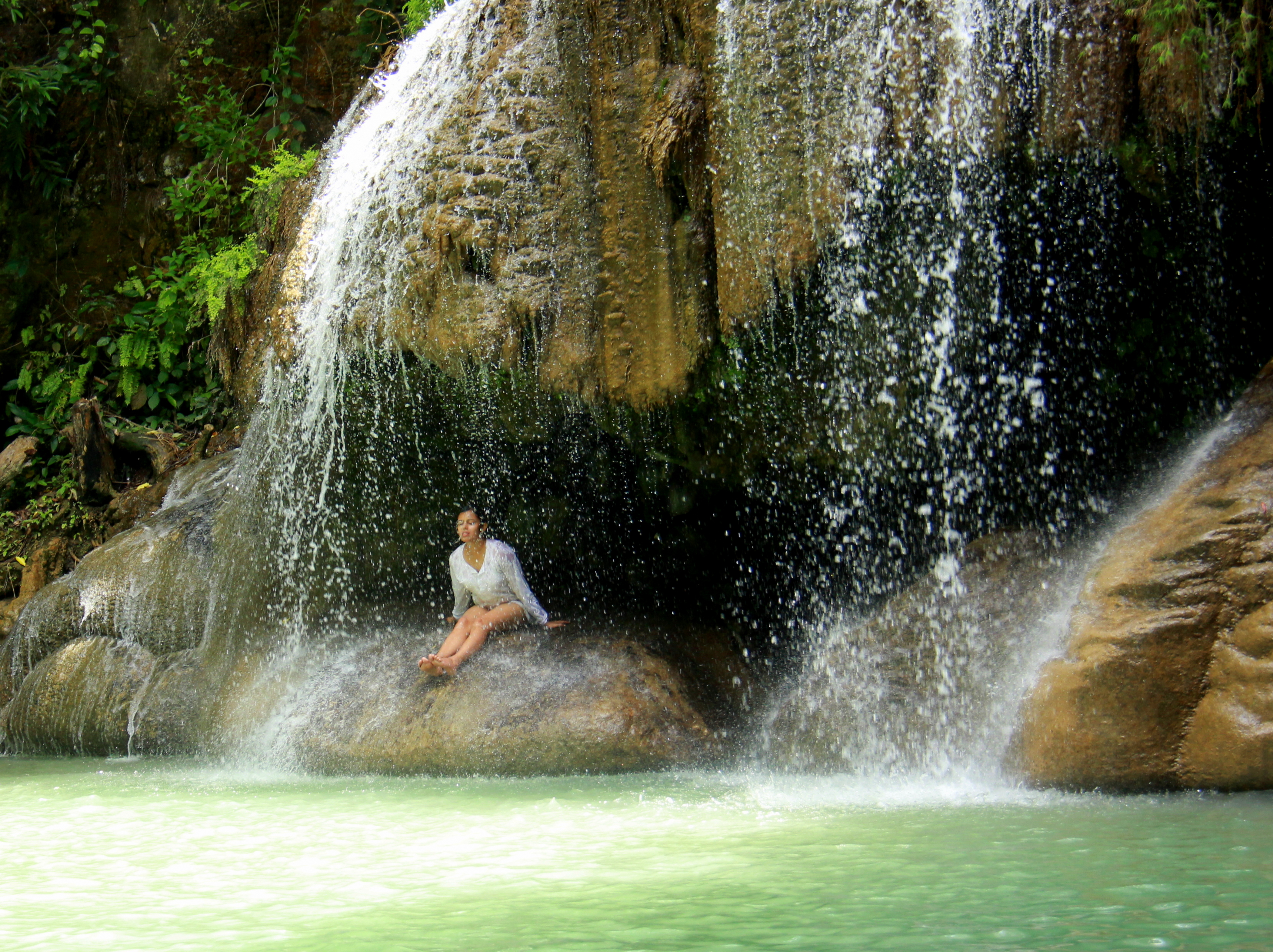 Kanchanaburi is a very pretty province and it’s close proximity to Bangkok makes it all the more alluring. Filled with waterfalls, forests, caves, lovely tranquil countryside, rivers and World War II remnants, it is very popular among both the foreign and Thai tourists and the annual River Kwai Bridge Festival, held from the end of November to commemorate the first Allied bombing of the bridge is a very busy time. We, however, had been blissfully unaware of all this, until a twist of fate had dropped us right in the middle of the province’s green lushness and the reason had been our travel over confidence.

Romance, when shared with someone from another continent is tougher than usual and more than often, you feel the pressure of global border regulations threatening to tear you apart. Such practicalities had also plagued our case, but for quite some time, owing to our traveling schedule, we had successfully managed visas, children and being together all at the same time. Perhaps, this had caused our travel confidence to rocket sky high when a twisted Indian visa on arrival system had thrown us off balance and we had immediately realized our vulnerability as a couple and a family. But as the popular saying goes, “All’s well, that ends well” our Kanchanaburi experience had turned out to be wonderful and it had ushered into our lives some long pending lifestyle changes.

The month had been July, when Tarek and I had chanced upon a lucky break from our busy schedules and we had wanted to relax amidst the flower filled hills of Kashmir. The vacation had been a hard earned one and we had planned diligently for it, dreamed of glassy lakes, white peaks and gondolas and had even wedged in a small Ladakh stopover by motorbike. Everything had been booked, paid for and we had left for our own individual airports with suitcases packed with sensible woolens for a perfect mountain break. Since, India was offering a visa on arrival to nationals of certain countries, (one of which Tarek belongs), we had not felt the need to worry about anything and our decades of mutual traveling experience had given us the confidence that nothing could stop us from enjoying our much awaited dream getaway.

Fate, however had other plans and it had been while checking in for the Frankfurt – Delhi Air India flight, that we had received the rude shock of Tarek being denied boarding for not holding a valid visa. Now, India’s visa on arrival is a quintessential puzzle and the process includes a few weeks prior online pre application to avail the VOA facility at the destination airport. That minute detail had been something, which we had overlooked as a possibility and as the irritated airline officials had rushed about to prepare for the departure of our flight, we had fretted over the phone with two continents distance between us. Finally, when all our attempts at wheedling, bullying and requesting the airline officials had failed, an Eureka moment had made us buy the two remaining seats on the continuing Air India Frankfurt-Delhi-Bangkok flight and needless, to say, Tarek had been the last to board.

The result, had been a real travel disaster combined with a transit area emotional love scene and we had landed in rain soaked muggy Bangkok with clothes fit for Ladakh. Bangkok had been rain lashed at that time, with monsoon showers and humidity tormenting the city and cooped up, in our hotel room, we had frantically searched for a place to get away from it all. Thus, Kanchanaburi had popped up as a willful child and the next morning we had hailed a taxi from the street to escape Bangkok’s monsoon madness. The 3 hours drive through the western Thai countryside had been smooth and post leaving the city, the wide highway had been a pleasure to navigate. Speckled with heavy vehicles, tourist buses and occasional taxis, the road had bifurcated through the heart of western Thailand and a mild landscape of continuous rice fields, open skies and lily filled ponds had flanked on both sides of the highway. Soon, jagged limestone hills had started looming in the hazy horizon and Kanchanaburi had arrived with a refreshingly green tranquility.

We had smelled Kanchanaburi even before it had arrived and the fragrance of wet, moist green earth had made us fall in love with it at first breath. Located at the confluence of Kwai Noi and Kwai Yai rivers, the town of Kanchanaburi had been experiencing a post rain damp sappy mistiness at that time and the distant limestone hills had looked watery blue from the wooden porch of our quaint raft cabin. It had been a floating room moored to the bank of the river with empty barrels and a noisy family of ducks had been our immediate aqua neighbours. The hotel which had been run by friendly Dutch-Thai owners, had been an oasis of peace, flower filled garden restaurant and our days had passed watching clouds race across the glassy watery surface. The river which had run broad and calm underneath and all around us, had been enclosed by a soft bank on the other side and ripe fields of golden paddy had stretched till the unbroken line of limestone hills. Golden green, watery and lush, it had been farthest from our Ladakh dream and we had readily given into the Kanchanaburi’s charms with open minds.

Had happened as an unexpected trial

And ended up being a trip to remember

Once succumbed, our days had been idyllic and we had spent our time exploring its green heart on a little rented motorbike. Sun too had been kind on us and apart from one rain drenched morning, our shoulders had been browned as berries as we had ridden through small, obscure villages, rustling forests, up soft rounded hills and raced along the iconic Kanchanaburi railway tracks. We had loved them all and in the ever changing sun kissed scenery of rice fields, caves and village fairs, only the river had seemed constant. In fact, Kanchanaburi’s laid back river vibe had been its biggest draw and the whole region had been filled with water bodies. Puddled with pools, bamboo dripping streams and dazzling river bends, it had been a water baby’s paradise and the area around the iconic Kwai River bridge had been like a mini carnival.

Made famous by Pierre Boulle’s book, “The Bridge Over the River Kwai”, it had been the most important of all of Kanchanaburi’s tourist places and the bridge had lead off to roads named after countries involved in the WW II conflict. The entire town had seemed to have concentrated around it and restaurants, bars, parks, performing musicians, flea markets and tourists had flocked around the bridge in hordes. The festive atmosphere had been a far cry from the event which had made it famous and as one of the most affected World War II areas of Asia, Kanchanaburi had been responsible for an estimated hundreds of thousands of deaths of POW (Prisoners of War) and conscripted Asian labourers. Stark reminders of that tragedy still prevail all over the province and the area is riddled with war museums, cemeteries, remnants of Japanese invasion in caves and memorials.

Despite its sinister history, Kanchanaburi had been pretty as a postcard and the gateway province of Thailand’s wild west had held some truly magnificent waterfalls. Erawan Waterfalls had been the most beautiful (and popular) one and we had indulged one sunny afternoon swimming in its multi tiered emerald green plunge pools. Situated at the dense green Erawan National Park, the seven tiered waterfall gets its name from a three headed elephant of a popular Hindu myth and despite schools of nibbling fishes, which call them home, it had been the perfect place for an afternoon swim. The well maintained national park too had been a great place for a day trip and hiking trails had pierced through its thick canopy of mixed deciduous forest. Cascading rock formations had given rise to deep green travertine fairy pools and the water of Erawan had plunged down the slopes in a most dramatic manner. The surrounding landscape too had been moist and green and road signs had warned motorists of crossing herds of elephants.

Kanchanaburi had it all

It had indeed been a most charming place, where time had seemed to stop to indulge in some exotic beauty and small village fairs had shown off the real rustic life of Thailand. Sometimes during our cross province rides, we had stumbled upon obscure village markets which had been gleefully attended by country folks who had dressed up in their finest to arrive to their weekly highlight in truck loads. Decked in hats, make up, shoes and gaudy clothes, they had shopped, strolled, bargained and called out to acquaintances whom they have known perhaps all their lives. Those village markets had been real gay affairs and smells of local dishes, cries of excited folks and dust from constant shuffling feet had risen above the shrill cries of the farmers selling fresh produce of their land. Some of our finest Kanchanaburi moments had been spent there amidst frying chicken and lines cheap clothes on sale and they had been real, grounded and connected with the people of the land.

Even today, our unexpected Kanchanaburi getaway is one of our most precious memories and the reason had been the land. Although, I am a strong believer of people making places, Kanchanaburi had been one destination which had been equivalent to a human emotion itself. Poignant, beautiful and vulnerable due to its simplicity, Thailand’s wild west frontier had been one unforgettable destination.

Kanchanaburi had been a wonderful