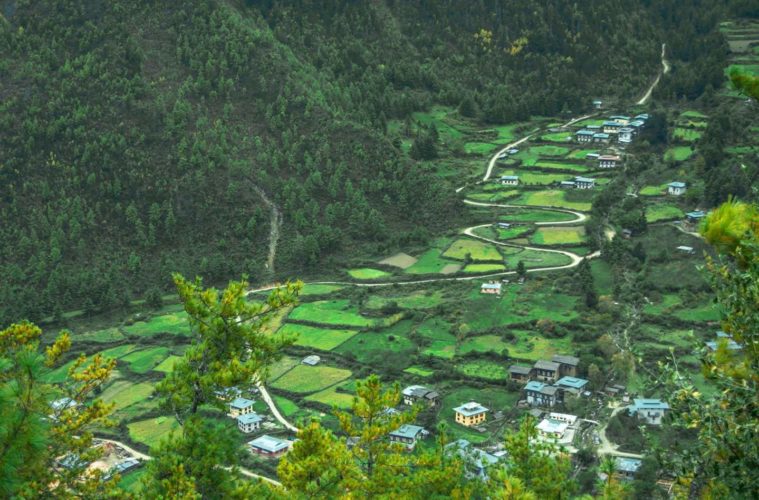 The Haa Valley of offbeat Bhutan

Bhutan is a land of the enigma. A piece of paradise on the Himalayan range, it is the only country which contributes more oxygen than it consumes. Blessed with incredible beauty, there is more to this Himalayan kingdom than the much visited Tiger Nest, Paro Dzong and Punakha Dzong. Many places outside this tourist circuit still remain relatively unexplored, thus making offbeat Bhutan a joy to explore. One such lovely secret of offbeat Bhutan is the gorgeous Haa Valley.

Discover the Haa Valley of the offbeat Bhutan trail

Located close to the popular Chele La pass, the Haa Valley is often overlooked by most visitors. It is situated on the banks of river Haa Tshechu and the small town is which is only twenty kilometers away, is accessible by a stunning drive. Filled with breathtaking views of mountains Chomolhari & Jichu Drakey, this scenic drive takes one to Haa, where the original essence of offbeat Bhutan is delightfully preserved. Only two-and-a-half hours drive away from the Paro airport, Haa was opened to the foreign tourists for the first time in 2002.  It was once the main commercial gateway to Sikkim, India, and Chumbi in Tibet. Such was its historical importance that India’s first Prime Minister Jawaharlal Nehru explored offbeat Bhutan on horseback through this route in 1958. Not only did he do justice to this historic route, but he also paved the way for the regionally important Indo-Bhutan friendship.

The beautiful, secluded Haa is locally known as the hidden land of rice valley. Located in the southwestern zone of Paro, it is the smallest district of Bhutan. The picturesque town, which is one of the remotest spots in offbeat Bhutan, is blessed with pristine alpine forests bordered by mesmerizing peaks. The valley is the ancestral home of Bhutan-queen’s grandmother and is among the least visited areas in the country. Haa’s seclusion comes with magnificent beauty. Its fresh air, winding roads and views of the snowy peaks, make the valley an ideal destination for hiking or mountain biking. Being away from the commercial limelight has helped Haa preserve its traditions and culture. The valley is dotted with numerous temples and being the home to a number of nomadic herders, Haa hosts an annual summer festival showcasing their unique lifestyle and culture.

The lush green golf course at the Haa Valley.

Haa valley is riddled with magical beauty and astounding myths

Historically Haa is as interesting as it is riddled with mythical stories. During the pre-Buddhist era, Haa valley was known for its animist tradition and the inhabitants used to offer animal blood to their local deities. This region was transformed in Buddhist tradition in the 8th century by Guru Padmasambhava, aka Rinpoche. Before the 8th century, Haa valley was controlled by Ap Chundu and many other local evil deities causing disaster and despondency to the local people. So when Guru Rinpoche arrived in Haa, he performed the Avalokitesvara ceremony whereby all the evil deities including Ap Chundu fell unconscious. When his senses returned, Ap Chundu found himself turned into a turquoise colored boy prostrating before the great Guru. Thus, Rinpoche became the most powerful protecting deity of the Haa valley and the protector of the Buddhist doctrine.

Recommended Read: A trip to the remote Gurez Valley

How green and tranquil is this valley?

Explore the incredible flora and fauna of offbeat Bhutan at Haa

The Haa valley has been blessed with rich natural biodiversity with relatively undisturbed ecosystems. The altitude in the valley ranges from 2000 – 5000 meters and over 250 species of plants including the blue poppy (the National flower of Bhutan) and white poppy (Mecopnopsis Superba) which is endemic to Haa, thrive here. Many endangered animals like the Bengal tiger, the elusive snow leopard, the Himalayan black bear, Himalayan musk deer, blue sheep, grey Langurs and the Himalayan marmots call the Haa valley home. Of the 45 different bird species have been identified here, with the most significant ones being the chestnut-breasted partridges, wood snipe, Rufous-necked hornbill, Himalayan Monal, and satyr tragopan.

Places of interest in the Haa Valley

Apart from the picturesque locales, Haa valley has quite a few temples and monasteries. Some of its famous sites are the 7th century Lhakhang Karpo (White temple) and Lhakhang Nagpo (Black temple) at the foothills of the venerated Meri Puensum mountains. The grand annual Haa Tshechu is performed at Lhakhang Karpo on the 8th-10th day of the 8th Bhutanese month. The other places of interest which involve some walking include the hike to the 8th-century Juneydrag, Katsho Goempa, Drana Trashidingkhag, Yangto Goempa, Jamtoe Goempa, Shelkardrag, Takchu Goempa and Haa Goempa. There is also a beautiful golf course, built and maintained with the help of the Indian army.

Only a short drive from Paro, Haa is like another planet.

Haa is still quite remote as a tourist destination. So, it is advisable to carry sufficient drinking water & food from Paro. There is limited eating out options in the valley and book ahead at a homestay if you want to stay there. Ask for permission before entering any place or clicking pictures. Avoid visiting the Haa Valley during the monsoon season.

This wonderful post with all the images is courtesy Debanjan Bagchi, an avid traveler, and photographer from Kolkata, India. I am lucky to call him my friend and he is always seeking something interesting in places, people, and history. When not taking beautiful photographs or traveling with his lovely wife, Debanjan is soaking up history like a sponge. To enjoy more of his beautiful photographs check out his facebook page.