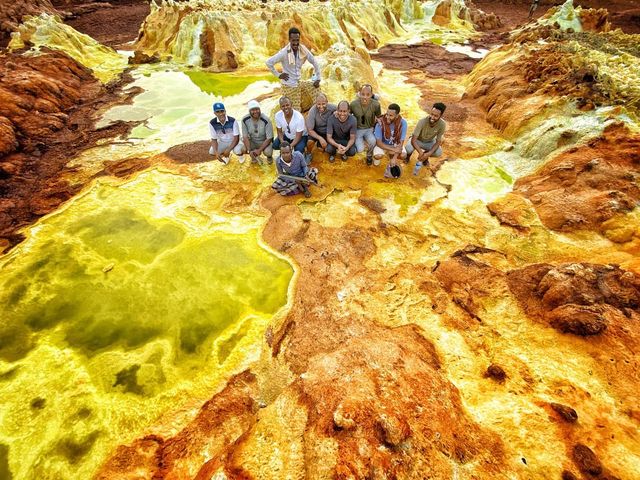 Danakil Depression is the main reason why I wanted to visit Ethiopia. It is one of the harshest and hottest places on earth, with a landscape so surreal that the photos will blow your mind away. I am talking of sulphur springs, active volcanoes, lava lakes, hissing geysers, acidic pools, vast salt pans, and colorful mineral-laden lakes dotting a nearly inhospitable area where survival is difficult for both man and beast. The vast region is formed above the separation of three tectonic plates, where the African and Asian continents are slowly ripping apart. This has created a geologically unstable, surreal realm of lava lakes and colorful hot springs. Volcanic activity in the Danakil Depression heats spring water, bringing sulphur and iron to the surface, and leaving behind yellow, green, and orange deposits. Add to this alien-looking landscape, centuries-old communities of Afar salt miners and their hobbling camel caravans and you have a scene that looks straight out of a sci-fi movie. Like their entire generations of ancestors, Afar miners travel for days by camel caravans to extract salt slabs from the flat pans around Lake Afar. Salt is considered to be the “white gold” of the region and was a form of currency in Ethiopia until the 20th century.

Formed by the tearing apart of Africa and Asia

Part of the “Afar Triangle,” Danakil Depression lies in the far northern reaches of the Afar region in northern Ethiopia. Eritrea is close by and although Ethiopia has heightened military presence to boost tourism in that area, know that the border is still volatile. The 2019 killing of the German tourist and his guides still haunts the memory of those visiting this place and it is advisable to check the situation carefully before going. Located at 430ft (130m) below sea level, Danakil Depression was created millions of years ago, as three tectonic plates beneath the African and Asian continents slowly began to break. Salt flats, colorful sulfur lakes, and volcanoes have resulted from this split, and the discovery of ancient fossils in the depression suggest human life existing there for thousands of years.

Berhale, where the Danakil Depression ‘begins’

All Danakil Depression tours start from Mekele. The itinerary begins with a drive to Hamad Ela town via Berhale. The Danakil Depression officially ‘begins’ here. The drive continues to Dodom and it is one of the longest road trip days of the tour. Plus, this stretch of the road is also one of the worst and is constantly cracked open by the extreme heat. The 70 km distance takes about 5 hrs and the landscape varies from areas of solidified lava, rock, sand and occasional palm lined oasis. Several temporary Afar hamlets lie on the way and one might catch a spectacular sunset in the desert before reaching Dodom. Erta Ale is just 9.5km from Dodom and it takes about 3 hours trekking to reach the summit.

Trek to a shield volcano and a lava lake

Erta Ale is a shield volcano with a base diameter of 30 km and 1km square caldera at its summit. It contains the world’s only permanent lava lake. Most visitors spend hours watching the lava action at the crater before sleeping on mattresses under open skies at the mountain top. The next day is spend arriving at Hamad Ela, one of the larger and more populated villages of the Danakil Depression. The accommodations offered here are better and some come with shared showers and bathrooms. Day three consists of starting early at Hamad Ela and driving to Ragad (Asebo). It is the area of the salt miners. From here, most head towards Dallol to sea the spectacular neon-coloured sulphur lakes before driving over to Lake Assal for a swim and a relaxing break. In the evening, travelers return to Mekele, with their bodies tired and dirty but their minds full of an unbelievable experience.

The smoking crater of Erta Ale

This is the land of the nomadic Afar people

I too visited the Danakil Depression from Mekele. It was included in the small group tour that took me to the Tigray rock-cut churches. We stopped overnight at the university Tigrian town of Mekele, before heading out in a 4*4 caravan into the depths of the Afar region. As a part of the Ethiopian government protection policy to safeguard the sacred tribal land of the nomadic Afar people and keep the insurgents at bay, Danakil Depression can be visited either with a guide or as a part of an organized group tour. Independent traveling is forbidden here and so our small group trooped inside a spacious 4*4 to head for an adventure to the sweltering, foul-smelling, punishing place. Armed guards accompanied us; all our provisions were strapped atop our vehicle, and we were advised to take minimum luggage and maximum amount of snacks, toilet paper, etc.

Would sleep by an active volcano?

While leaving Mekele, we had no idea how challenging this experience would be and our minds were occupied by the stunning images of the Danakil Depression and the Erta Ale volcano. None of us had ever seen a live volcano, forget about sleeping at the rim of its crater and it was a trip that everybody looked forward to. The difficulties struck us soon. It started with the heat. Danakil Depression is one of the hottest places on earth and during the daytime, the average temperature soars to 50 Celsius. Next came endless bumpy drives, as our 4*4 rattled over cracked salt pans, ropy hardened lava, and sand. Dust billowed behind us and the vast arid landscape looked empty except for intermittent huts and camels.

Danakil Depression is the most alien-looking place on earth

Only the sky remained constantly blue during the day and star-filled at nights. Our hardships continued with the lack of comfortable amenities, mosquitos, sleeping at the rim of the crater amidst sulphur fumes, and an unbearable constant heat. It is a land of no internet or mobile connectivity and for three days, we traveled in extreme heat into an isolated region with minimal infrastructure. None of us had neither slept well, showered (despite the heat), rested comfortably, and were connected to the modern world. Despite all this, if given a chance, I would revisit Danakil Depression any day and I can guarantee most travelers to this surreal alien-looking place would say the same. Nowhere else on earth, does this Mars-like panorama exist and the Danakil Depression is indeed one of the most extraordinary-looking places in the world.

A close-up of sulfur deposits in the Danakil Depression

A sulphur lake in the Danakil Depression

The area around Lake Dallol and its sulphur springs.

These fissures at the Erta Ale crater hiss out hot gas straight from the lava lake.

A 4*4 on its way to Dodom. This is what the landscape looks like: absolutely empty.

An Afar guide packing up his guests’ sleeping mattresses after spending the night at Erta Ale.

A colourful mound of mineral deposits at Danakil Depression

The spectacular colours of the Dallol area

A camel caravan enters the salt mining area of the Danakil Depression.