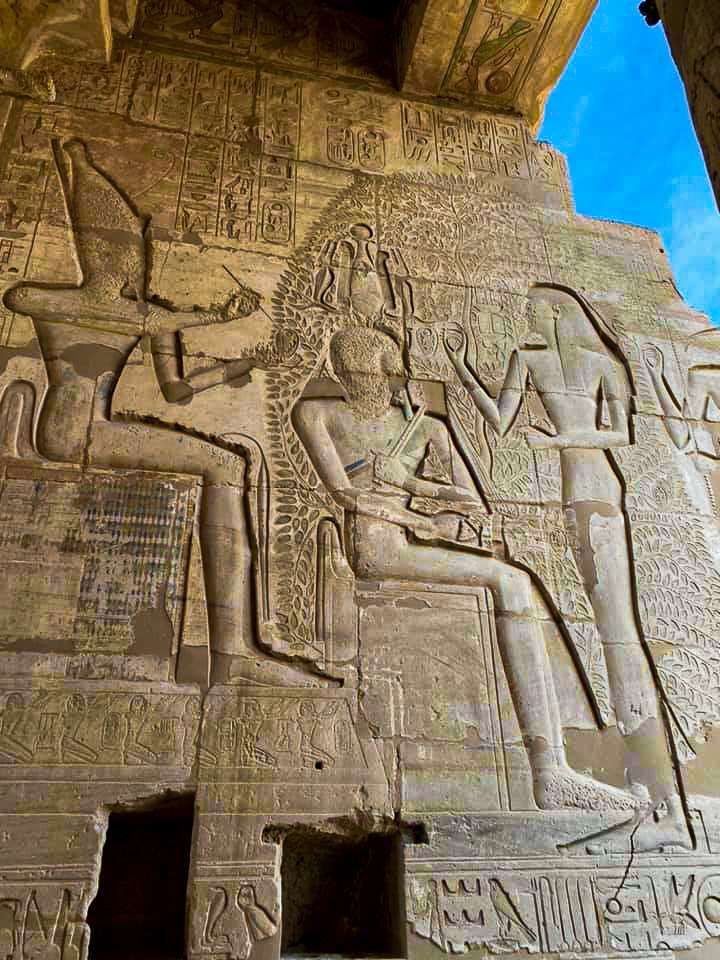 The Ramesseum is the mortuary temple of Ramses II. As the last great pharaoh of Egypt, Ramesses II spent 20 years of his 67-year reign in building the Ramesseum. This mighty pharaoh ruled during the 13th century BC from 1279-1213 BC when ancient Egypt was at the peak of its power and glory. This brought incredible wealth, and popularity to Ramses II and needless to say ballooned his vanity. He decided to aim for immortality building one of the largest and the most grandiose of mortuary temples. Thus the inspiration for Ramesseum was conceived and it is an impressive, yet desolate site.

Ozymandias, the fool who aimed for immortality

It is difficult to put in words my first feeling at the sight of Ramesseum. For some strange reason, verses of Shelley’s ‘Ozymandias’ came to my mind and I remembered the haunting quality of the following lines –

I met a traveller from an antique land
Who said: “Two vast and trunkless legs of stone
Stand in the desert. Near them, on the sand,
Half sunk, a shattered visage lies, whose frown,
And wrinkled lip, and sneer of cold command,
Tell that its sculptor well those passions read
Which yet survive, stamped on these lifeless things,
The hand that mocked them and the heart that fed:
And on the pedestal these words appear:
“My name is Ozymandias, king of kings;
Look on my works, ye Mighty, and despair!”
Nothing beside remains. Round the decay
Of that colossal wreck, boundless and bare
The lone and level sands stretch far away.”

The ruins of the dream of immortality

The sight of fallen pride at Ramesseum

‘Ozymandias’ was my favourite poem in school and I loved the underlying message of these grandiose sentences. The major theme behind the poem is that all power is temporary, no matter how prideful or tyrannical a ruler is. Desolation, fallen pride, and crumbled glory screamed out from this stanza and I felt the same at Ramesseum. The mute massive monument stood like a blind, old man – a shrunken shadow of once a giant. To me, it seemed to be shaking its shaggy grizzled gray head unable to come to terms with the ruthless march of time and wondering where all the glory went. It is true that when I visited the Ramesseum, there was not a single soul in sight. The entire place was empty except for the pigeons that nested in its ancient crannies and not even the usually omnipresent caretaker was there. A warm desert breeze blew through the columns and underneath our feet, the golden sand slithered and rustled. The first thing I saw there were the toppled colossi and it was this forlorn sight that brought Shelley’s ‘Ozymandias’ to my mind. The broken colossi looked like a kicked dog, a mockery of the presumption of Ramses II when he aimed for immortality. It was much later that I found out that the other name of Ramses II was indeed Ozymandias.

The ruins of Ramesseum

In antiquity, Ozymandias was a Greek name for the pharaoh Ramesses II. It was derived from a part of his throne name, Usermaatre. Ramses II was one of the ancient world’s most powerful rulers and he was known far and wide for his military exploits. Ramesseum was built to awe the pharaoh’s subjects, perpetuate his existence in the afterlife, and forever link him to Amun-United-with-Eternity (one of Amun’s many avatars). Like other memorial temples, it was a part of Ramses II’s funerary complex. While his tomb was built deep in the hills, his memorial temple was on the edge of the cultivated area on a canal that connected with the Nile and with other memorial temples. Had nature and time not decided to ravage this great mortuary temple, the Ramesseum would have matched the pharaoh’s sun temple of Abu Simbel for monumental grandeur and unabashed self-glorification. However, unlike the other well-preserved Ramses II structures of Karnak and Abu Simbel, Ramesseum has not survived the march of times very well. Although it has been extensively restored, this is famous for the scattered remains of fallen statues and inspired poets like Shelley to use the undeniable fact of Ramses’ mortality to ridicule his aspirations to immortality. Ramses II himself was not aware of this when he decided to build the funerary complex beside an earlier temple on land that was annually inundated by floodwaters of the Nile and he lavished wealth and attention in building it.

The Ramesseum complex consists of two courts, hypostyle halls, a sanctuary, accompanying chambers, and storerooms. Although the layout was quite conventional, it was more elaborate than most of the other funerary temples. Since it was built adjacent to an earlier smaller temple of Ramses II’s mother, Tuya, the rectangular floor plan of Ramesseum was altered. One enters the complex through a doorway of the enclosure wall and comes into the second court. The first and second pylons are massive and they showcase reliefs of Ramses’ military exploits, particularly his battles against the Hittites. Through the first pylon are the ruins of the huge first court, including the double colonnade that fronted the royal palace. Ramesseum is much in ruins and it is one of the most distinctive features of this site since most of the archaeological complexes of Luxor are excellently preserved. The most haunting sight of this funerary complex is near the western stairs, There a part of the Colossus of Ramses II lies forlornly on the ground where it once towered at a grand 17.5 m tall. There used to be two such colossi and the head of another granite statue of Ramses II, one of a pair, lies in the second court. Twenty-nine of the original 48 columns of the great hypostyle hall are preserved and the cloudless blue North African sky peeps through them like shards of glass. In the smaller hall behind it, the roof, which features astronomical hieroglyphs, is still in place. Some of the wall carvings, including one showing the pharaoh’s name being inscribed on a leaf, are finely done.

How the mighty fall

Ramses II called his massive funerary temple ‘the Temple of Millions of Years of User-Maat-Ra’. The classical visitors called it the tomb of Ozymandias and the nineteenth-century writers knew the ruins as the Memnonium. It was Jean-François Champollion, who deciphered hieroglyphics, called it the Ramesseum, and by the time, he was there, the complex had been much plundered for statuary (the seven-ton head of one of its fallen colossi is now in the British Museum). This ravage and devastation lends romance to the otherwise rather conventional albeit grandiose complex and infuses it with pathos.