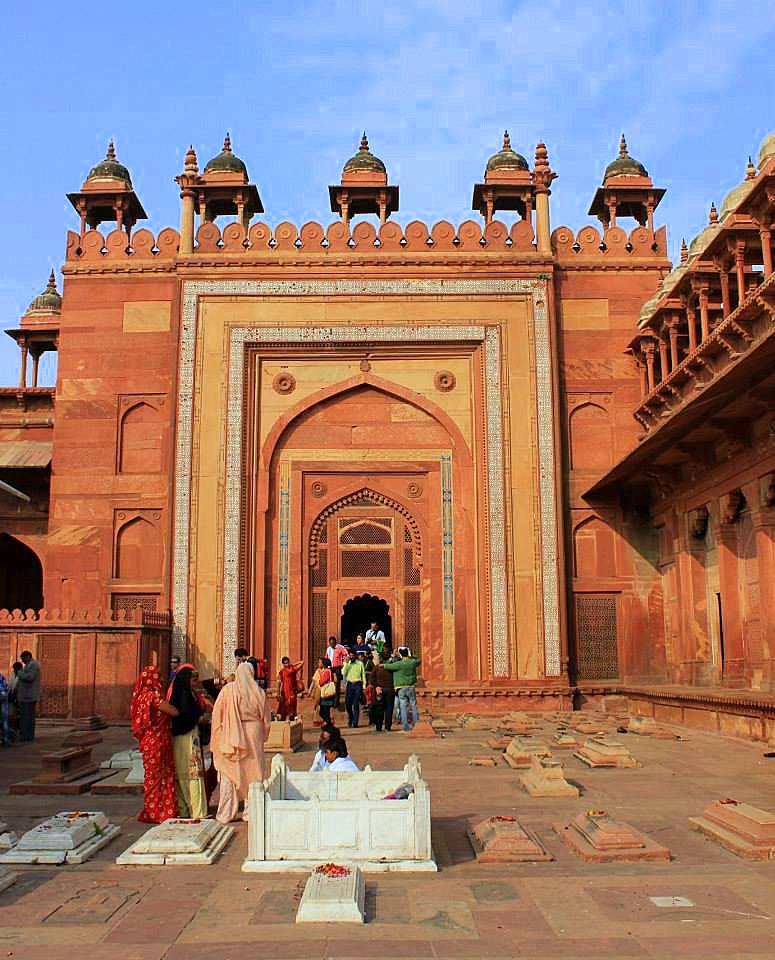 The story of Fatehpur Sikri: an abandoned royal city

We left Agra the next day and started driving back towards Jaipur. Fatehpur Sikri was on the way and we decided to stop there for the day. Considered to be one of the most magnificent ghost cities in the world, Fatehpur Sikri is around 40 kilometers away from Agra. It sits atop a ridge and was founded in 1569 by the Mughal emperor Akbar. Although there are a lot of stories that revolve around the moving of the capital city to Fatehpur Sikri from Agra, the most popular one claims that it was built in honour of the great Sufi saint Salim Chishti. Fatehpur Sikri meaning “The City of Victory” does house the saint’s mausoleum inside but its existence as a Mughal capital was short-lived.

Fatehpur Sikri is the seat of the saint Salim Chishti

Akbar, in spite of his military victories and growing power, was in dire need of a male heir and he was slowly reeling under it. After the death of his firstborn twins, it was here that the heartbroken emperor ended up to nurse his woes. He met the saint there and Salim Chishti predicted that a son would be born to him shortly. Akbar went back hopeful and was overjoyed when soon he was presented with the news that his Hindu wife Jodha Bai was expecting. A pregnant Jodha was sent to the site to seek the revered saint’s blessing and Prince Jahangir was born shortly. Akbar honoured the saint by naming his son Salim (later emperor Jahangir) and on his 2nd birthday, started building the new capital city of Fatehabad as Fatehpur Sikri is also known.

You may also like: MOSAIC LOVE IN AGRA: CHINI KA RAUZA

Buland Darwaza is the gateway to the ghost city

The magnificent fortified ancient city of Fatehpur Sikri is a masterpiece of Indo Islamic architecture and speaks volumes of Akbar’s tolerance for all religions and faiths. Today it is yet another beautifully preserved architectural enigma full of hustlers, beggars, and camera totting tourists. We entered the magnificent city of Fatehpur Sikri through the humongous Buland Darwaza and our jaws dropped immediately upon entrance. True to its stature of the powerful royal capital, Fatehpur Sikri was stunning and the stupendous 55 meters high Buland Darwaza or the Victory Arch made us feel very puny. Built in 1576 to commemorate emperor Akbar’s victory in Gujarat, the Buland Darwaza was flanked by impressive domes and it looked 3 dimensional. The beautiful red sandstone structure was inscribed with messages from the holy Koran and it was set on the south wall of the congregational mosque of Jama Masjid. The massive doors were embedded with horseshoes, some of which dated back to the beginning of the twentieth century, thus rendering it the apt name of the Horseshoe Gate.

The beautiful mix of architecture at Fatehpur Sikri

Fatehpur Sikri is synonymous with its creator

It is believed that Akbar himself dictated the architectural style of his dream city and saw to it that the Islamic virginal beauty blended with sensuous Indian opulence perfectly. The complex also spoke volumes of his tolerance for all faiths and he actually used to hold audience with spiritual leaders of different religions to understand the depths of their beliefs. His compounded religion Ain-i-Akbari happened after many such religious discourses and it was a mixture of sensibilities from all faiths. Originally called Fatehabad, it was later renamed Fatehpur Sikri and was indeed Akbar personified. As a brainchild of an eternal learner, a man of earthly passions, a mighty emperor and a great statesman, Fatehpur Sikri truly reflected Akbar’s magnitude.

You may also like: A WINTER ROAD TRIP TO AGRA

This string shows the pretty jhumka or dangler motif

The details of Fatehpur Sikri

Because of the easy availability of locally quarried sandstone (called Sikri sandstone), the fortified complex shaped into a beautiful red city and the ghost town is one of the best-preserved collections of Mughal architecture in India. Fatehpur Sikri is 3 kilometers in length and 1 kilometer wide and is walled on 3 sides with the 4th having a lake. Its main architect was Tuhir Das and most of his skilled craftsmen came from Gujarat and Bengal, thus resulting in heavy Hindu and Jain embellishments on the structures. Accessible through gates along the long fortified wall, namely, Delhi Gate, the Lal Gate, the Agra Gate, Birbal’s Gate, Chandanpal Gate, etc the Fatehpur Sikri complex contains many royal palaces, harem, courts, a mosque, private quarters, and step-wells.

Recommended for You: THE ICONIC TAJ MAHAL AND ALL YOU NEED TO KNOW ABOUT IT

The peaceful Jama Mosque and the saint’s tomb

The Jama Masjid in comparison to the Buland Darwaza is strikingly simple. Its most striking features are the row of chatris or tiny domes (a very Indian style) that top the sanctuary. The Masjid overlooks the massive courtyard and the shimmering white tomb of Salim Chishti. The great saint lies under a single-storied white marble structure with a lovely tank of red sandstone. A lotus-shaped fountain stands in its middle and the pool serves for ablutions before prayers. His male descendants lie entombed near his shrine and it is a lovely intricate white shelter.  We explored deeper into complex and took in its magnificence.

The public multi bayed colonnaded Diwan-i-Aam (for public audience), the Turkish Baths and the Diwan-i-Khaas (for private audience like the great spiritual leaders) and its courtyard ( containing Ankh Michauli for playing hide and seek, Astrologer’s Seat and Pachisi Court, giant ludo like board game) lie in layers immediately beyond the main courtyard. Akbar was reportedly a fanatical player and used slave girls dressed in costumes as live pieces. The court chronicler Abu Fazl (one of Akbar’s nine gems) mentioned the emperor’s habit of studying his courtiers’ psyches and capacity based on those games and needless to say some of his Pachisi games lasted up to months.

A peep into the royal women’s quarters at Fatehpur Sikri

We took a break in front of Anup Talao (Peerless Pool), an ornamental lake which lay placidly green in the afternoon sun. Important private quarters stand surrounding it and the royal enclave including the Daulat Khana (Abode of Fortunes) Akbar’s own private quarters and library (although he was an illiterate), Khwab Bagh (House of Dreams with the huge imperial bed), the 5 storied Panch Mahal (a Hindu astrology based structure to mark the beginning of Women’s Quarters or Zenana) circle the pool. The visit felt like a very intimate experience and offered an unbelievable insight into the heavily guarded private life of the royal family. I could almost imagine their balmy evenings of entertainment with musicians performing in the central platform of the lake.

What lies beyond the fortified royal complex

The afternoon sun rose high in the sky making the day very hot and we quit our Fatehpur Sikri walk soon. We left without visiting Jodha Bai’s palace (his chief queen and a hugely successful shipping tycoon in her own right), Birbal’s House (Akbar’s favourite courtier and one of his 9 gems), Hawa Mahal (Palace of Winds) and Sunhara Makan (Golden House) unexplored. The fortified complex of Fatehpur Sikri, however, is not restricted to those buildings only and stretches laboriously further into mints, royal workshops, records office, etc. A whole bustling world of a bygone era of common existence lies outside the complex and caravanserais, shops, and homes encircle the ghost city.

Why was the Fatehpur Sikri was abandoned?

As we drove out, I turned around to see the disappearing turrets and domes of Fatehpur Sikri silhouetted defiantly against a blazing noon sky. Heartbreakingly desolate yet staggeringly magnificent it is bewildering to figure out as to why somebody would abandon something so beautiful and cherished. Fatehpur Sikri was indeed Akbar’s dream in red sandstone, his pride and his proof of dedication to his patron saint, Salim Chishti. Akbar was a descendant of the great Uzbek leader Timur Lane and wanted to revive the splendours of the Persian court in his new city. The idea of “Navratna” or the nine jewels of his court was also born here. With so much of heartstrings attached, it was indeed mindboggling as to why Fatehpur Sikri got abandoned so quickly. Was it due to the oft mentioned water paucity or pressing military issues which made him take the drastic step and incur huge financial waste along with the risk of being called whimsical? The reason behind its abandonment is still unknown and until today the beautiful ghost city of Fatehpur Sikri remains an enigma. Stunning, desolate and seemingly unreal it looms on the rocky ridge of the Vindhyas like a spectre of a beautiful woman, who waits for her abandoned lover endlessly, in vain.

Fatehpur Sikri is a UNESCO World Heritage Site. It was an important halt for merchants on the routes across northern India and bears testimony to the architectural achievements of the Mughal Empire in the late 16th century. Emperor Akbar, who moved his residence to the city and erected a major new palace complex made the city the capital of his vast empire. Though the city was abandoned in the 1580s it continued to be an important halt for Silk Route traders and was often inhabited by crowds of merchants from India, Persia and further lands.

Fatehpur Sikri lies at a distance of 39 km from Agra.  It is 3 km off from the Agra-Jaipur-Bikaner National Highway 11.  Jaipur is approx. 210 km away from Fatehpur Sikri. The nearest Airport in Agra and Delhi Airport, 230 km away. If you are coming from Jaipur to Agra, then you can stop en-route to visit Fatehpur Sikri, But if you are travelling from Delhi or from any other place, then the best way to reach Fatehpur Sikri is to travel via Agra. Fatehpur Sikri is well connected by the railroad. The main railway station is the Agra Cantonment station. Agra is well connected to all major cities in India. Idgah bus stand is the main bus stand of Agra and one can catch buses for Delhi, Jaipur, Mathura, Fatehpur-Sikri, etc from there.

The buildings and palaces inside the Fatehpur Sikri complex