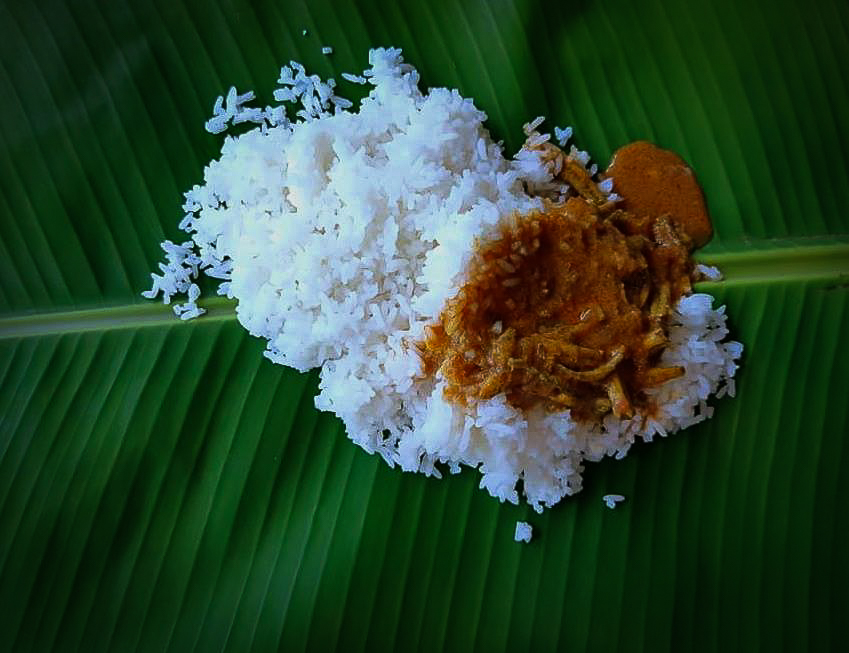 This southern holy city is regionally famous for its lip-smacking dishes. In fact, Madurai food is so well-known that it is considered the culinary capital of Tamil Nadu. Interestingly this spiritual town does not offer only the quintessential Tamil cuisine, but an exciting plethora of dishes that have been influenced by many foreign cultures. Madurai food culture has been shaped by communities such as the Madurai Saurashtrians (from Gujarat) during the brief phase when the Madurai sultanate lorded over this city; yesteryear trading partners like ancient Rome, and Sri Lanka. It is commonly known that the best of Madurai’s delectable dishes is found at the city’s messes  (local restaurants) and you have to be willing to shun cutlery and roll up your sleeves to really enjoy its culinary treasures. Although neither pretty nor posh, Madurai messes are the city staples where everyone goes to enjoy delicious and fresh local cookery. The walls may be grimy, the listless waiter taciturn, and you may have to share your table with fellow diners, but the food you get there is the best this gourmet destination has to offer. The street food of Madurai is yet another of its culinary gems and every evening, the clanging sound of kothu parotta stalls draws foodies in hordes. Earlier, the Madurai food scene included the tradition of all-night food stalls and although a recent clampdown has curbed this delight, the city has a huge range of eateries and family-owned restaurants that ensures plates full of comfort food until midnight. If all these Madurai food talks have whetted your appetite, then let’s go on a tour of not-to-be-missed dishes that are unique to the city.

On a Madurai food trail at the iconic Amma Mess

As strange as might sound coming from a holy Tamilian city, the best of Madurai food revolves around meat. Goat rules the palate here and Madurai gourmands nearly edible part of the animal. They even added meat to the most popular South Indian dish – dosa and the result is fantastic. Think minced meat, caramelized onions, fragrant curry leaves, and ginger-garlic paste – all sautéed together to form a topping on a layered rice pancake a.k.a dosa. The best part is the omlette that forms the base of this delicious concoction. The best Kari Dosa in Madurai is available at Konar Mess, a landmark eatery in this city. Their traditional recipe is top secret and has been passed word of mouth through many generations. Traditionally, the Konar community is one of Madurai’s cow and goatherds, and offal dishes are the highlight of their menu.

Don’t go by the name, because bone marrow omelette is one of the most delicious dishes you will ever try. An iconic dish of the legendary Amma Mess in Madurai, a bone marrow omelette is what originally drew me to this place. Once there, I discovered a plethora of lip-smacking dishes and keenly followed what other diners ordered. I watched in wonder at women in silk sarees and flowers in their hair eating with gusto with their men in lungis, their foreheads adorned with three lines of holy ash. Between those rare snippets of conversations, they tore off large chunks of uthappam and soaked them in a dark, thick curry fragrant with coriander, cumin, and hand-ground masalas. Otherwise, they dived all in, mixed generous portions of curries with their rice, and relished their food with their hands. At Amma Mess, at my late father’s insistence, I ordered some extra dishes and one of them was the Ayirai meen kozhambu (a gravy made of spined loaches). We followed it up with kallikattu kozhi saaru (a soup prepared with country chicken), kola urundai (mutton kheema balls), and nenjezhumbu chops (goat rib chops). Served on fresh banana leaves, one redolent curry followed another and we sat there for a long time, eating, relishing, enjoying the air conditioning, and eating again. In the end, our entire platter turned into an elai sapadu, a banana leaf feast. It was one of the best lunches I ever had.

Mutton balls, one of the original Madurai food

Kola Urundai or mutton balls originated in the city. This simple recipe is best enjoyed at the Chandran Mess in Madurai. Made in a kitchen that is still cleaned and maintained by the family, packaged masalas are taboo here. Every day, the cooks of Chandran Mess manually pound minced meat with spices that are freshly ground in stone pestles. Their mouthwatering kola urundai (mutton balls) are made daily from scratch and the kitchen is still supervised on a daily basis by the owner and his family members. The fried mutton balls of Chandran Mess burst with flavour and are a must-have Madurai food.

Fluffy and light idiyappam a.k.a string hoppers are best enjoyed with only two sides – a tomato-based chutney and a coconut-milk sweetener. The bare-bones establishment of Burma Idiyappam Kadai is the best place to enjoy this dish and it is the only item on the menu there.

Kothu Parotta was made to use any leftovers. Although the recipe traditionally used leftover parotta, it can also be made with fresh ones. It is prepared by cutting parotta into small pieces and then tossing them with an assortment of spices, vegetables, and sometimes meat. Both vegetarian and non-vegetarian versions are available. It is popular street food in Madurai and can be sampled piping hot at nearly every corner of the city. A regional specialty, mutton chukka is made with tender goat meat cooked with coriander powder, chilli powder, and cumin powder. The word chukka is loosely derived from ‘sukka’ meaning dry. It is indeed a dry curry that is prepared with freshly roasted spices such as coriander seeds, cumin, and whole pepper. Small shallots add an extra zing and it is high on the fiery quotient. Mutton chukka is usually eaten as an accompaniment with dosa, parotta, or rice. It also forms a part of Amma Mess’s non-veg platter.

This strange dish is a cross between a bun and a parotta, and you have the Madurai famous bun parotta. It is comparatively new in the Madurai food scene and came into being somewhere in the 90s. Crispy and soft at the same time, it is eaten with quail, mutton chukka, and a kothu parotta – minced on a griddle extravagantly with eggs, meat, curry leaves, and onion.

Fluffy bun parottas in the making

I don’t have a sweet tooth and generally, avoid any desserts or drinks made with condensed milk. So, I didn’t sample some of the most famous Madurai food namely Jigarthanda, Kalkandu Sadam, Paruthi Paal, Madurai Halwa, and Elaneer Sharbat. I have heard much of Jigarthanda – a name that I find infinitely fascinating. Literally meaning soul cooler, this iconic Madurai drink is made from a mix of almond granules, condensed milk, hand-churned ice cream, milk, and tree gum. Tarek tried it and found it cloyingly sweet and I gave it a miss altogether. Kalkandu Sadam is one of the last remaining vestiges of Saurashtrian Gujrati community influences in the city. Brought to Madurai by the silk-weaver Saurashtrian Gujarati community sometime during the 14th century, this sugary, rice-based dessert can be best enjoyed at Sri Nagalakshmi Annexe, one of the few remaining authentic Saurashtrian restaurants. Although I was interested in trying Paruthi Paal due to its interesting ingredients, I couldn’t find it anywhere in the city. A thick drink made up mainly of cotton seeds, coconut milk, rice flour, cardamoms, jaggery, and ginger, it is a local remedy for cold, and digestive disorders. Last but not least Elaneer Sharbat also remained elusive during my Madurai food trail and the only ones I found were being sold by street vendors with dubious hygienic habits. Supposed to be the perfect thirst burster for Madurai heat, Elaneer Sharbat is a refreshing drink made from tender coconut, manner syrup, lemon juice, and ice cubes.

Dosa with different curries at Kumar Mess in Madurai 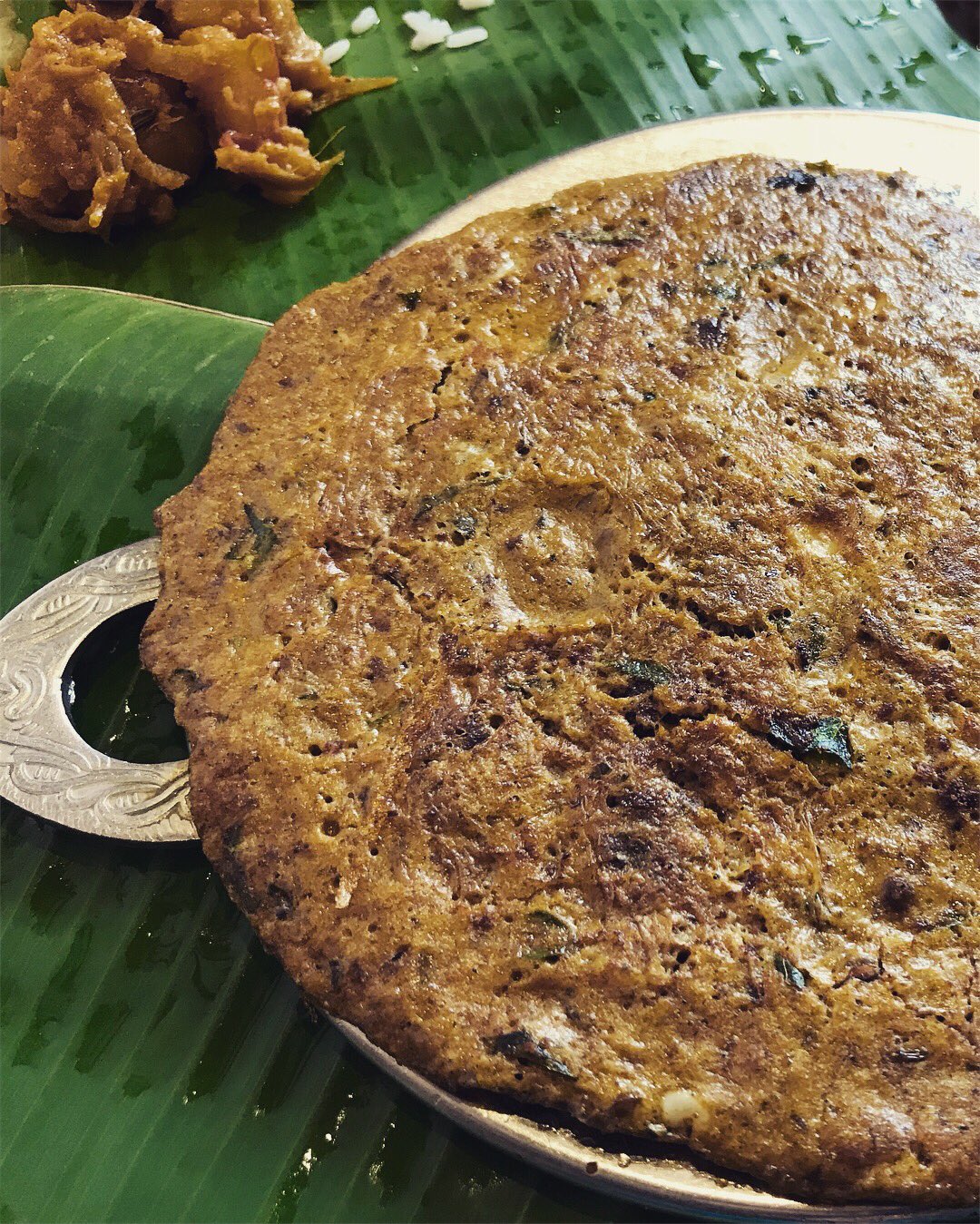 Madurai is such a foodie’s paradise

Despite being a holy Hindu city

Thus it is no wonder

That Madurai is on