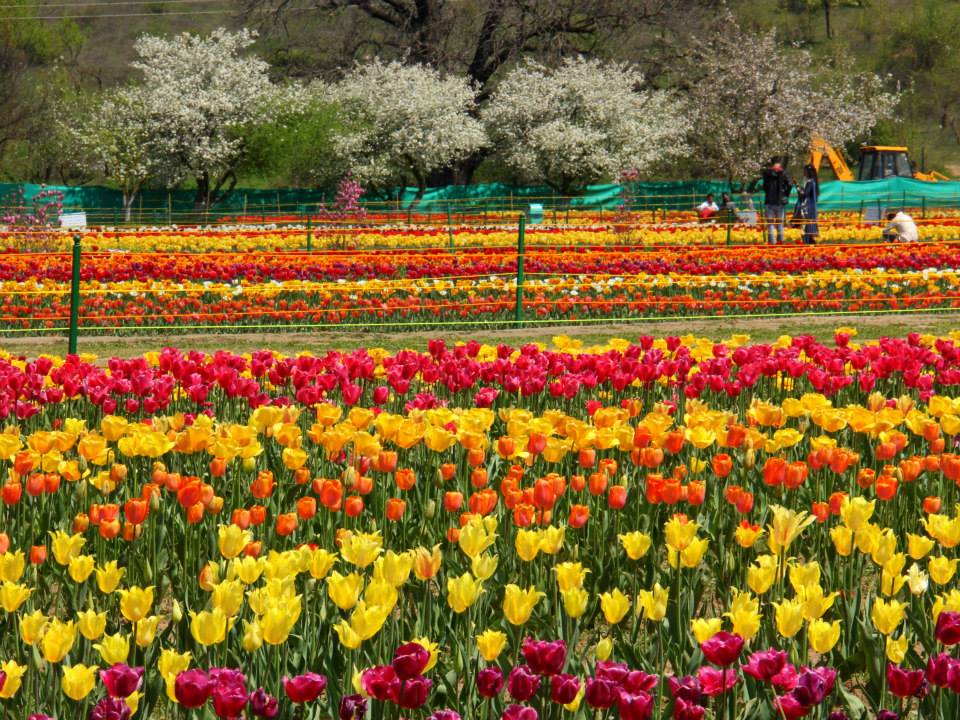 Srinagar is a city of gardens. Mughals loved Kashmir and decorated this mountainous state with gorgeous terraced gardens. These are called Mughal gardens and can be found all over the state. The capital city itself has quite a few. Chashme Shahi, Nishat Bagh, Shalimar Bagh, Pari Mahal, and Naseem Bagh are the most famous Srinagar Mughal gardens and these border Dal Lake or are in its vicinity. Mughal gardens were traditionally designed on the lines of medieval Islamic gardens called Charbagh. It is a Persian-style layout of quadrilateral gardens which are divided into four parts by flowing water. The gardens are walled-off enclosures, very private, and protected from the outside by high walls. These enclosures include flowing water streams, pools to reflect the sky and plenty of trees, colourful sweet-smelling flowers in gay abandon, soft grass, and lots of birds. Mughals loved symbols and used them in their gardens along with Quranic references of paradise. This was reflected in their choice of architecture, plants, and layouts. Numbers eight and nine were considered auspicious and were incorporated in the number of garden terraces and octagonal pools. In this post, I will mention a list of Srinagar Mughal gardens that are worth a visit.

Chashme Shahi is one of the loveliest Srinagar Mughal gardens

Chashme Shahi was built in 1632 by Ali Mardan, governor of Mughal emperor Shah Jahan. He dedicated the garden to his son Dara Shukoh. The loveliest of Srinagar Mughal gardens is located on the Zabarwan range and built around a natural spring. The chashma (spring in Kashmiri) was discovered by the great female Kashmiri saint Rupa Bhawani. She was a Kashmiri pandit and her family name was Rupa Sahib, thus originally naming the spring Chashme Sahibi. Over the years the name got misconstrued and today it is called Chashme Shahi. It is a steep climb up to the garden which is built in 3 terraces and decorated with waterfalls and fountains. Chashme Shahi is small, intimate, and bursting with flowers. Chrysanthemums, dahlias, pansies, geraniums, and roses dominate the scene and in summer, these are in full bloom. Nowadays, a stone hut has been built around the famed spring and it cascades down the terraces silently. The water of the spring is supposed to have medicinal qualities and it is said that the ex-late Prime Minister Indira Gandhi used to have Chashme Shahi water flown to Delhi for her personal use.

A short forested drive from Chashme Shahi took me to Pari Mahal (the abode of fairies). It was established on the ruins of a Buddhist monastery. This garden is located on top of the Zabarwan mountain range and overlooks Srinagar city and Dal lake. Shah Jahan’s eldest son Dara Shukoh lived here with his tutor Mullah Shah Badakshi from whom he learned the Qadiri order of Sufi Islam. Pari Mahal was built as an observatory for studying astrology and astronomy. It has no water body yet Pari Mahal offers magnificent views of the valley.

Almond and quince blossoms at Badamveer

Badamveer is an almond garden located in Haval area in downtown Srinagar. Situated at the foothills of Koh-e-Maran this garden comes alive in spring when the thousands of almond blossoms mist the area with their delicate pink hue. Dotted with almond trees, flower beds, a deep well, and cascades, Badamveer is a must-visit place for nature lovers in spring. The spring festival at Badamveer which used to be celebrated with great mirth, outdoor picnics, and music by Srinagar citizens for centuries, had over the years suffered a very quiet death. Unwieldy urban encroachment had eaten away much of its land and no longer the almond blossoms of Badamveer herald spring and New Year for the Kashmiris. However, thanks to the heritage preservation project by J&K bank, today much of Badamveer’s former beauty has been revived, and once again this beautiful tradition heralds spring in Kashmir. It is still an extremely romantic place and draws hordes of visitors every spring.

Located in Sirajbagh area of Srinagar, on the banks of Dal Lake, Indira Gandhi Memorial Tulip Garden was conceived and created in 2006-2007. It is Asia’s largest tulip garden. Spread over an area of nearly 12 hectares, every spring nearly 1.2 million tulips bloom in this garden. Every year this garden hosts the annual Tulip Festival in April during which the foothills of the Zabarwan mountains are carpeted with these glorious blooms.

Nishat Bagh is on the Dal lake promenade. Nishat Bagh means “Garden of delight” and it’s as heavenly as it gets. It was designed and built by Asif Khan, empress Nur Jahan’s elder brother in 1633. Located on the Dal lake at the foothills of the Zabarwan mountains, it has a magnificent view of the lake beneath the snow-capped peaks of the Pir Panjal range. I saw it first in late spring when it was a riot of colours, then in glorious autumn hues and have been in love with it ever since. Nishat Bagh is built in 12 terraces representing 12 signs of the zodiac and has gorgeous avenues of Chinar and Cypress trees polished stone water channels and benches. Zenana garden or the 12th terrace was used by the ladies of the royal harem and the rest was a public garden. And a very popular public garden it is even today. Tourists from all across the country thronged and mingled with handfuls of local visitors.

Shalimar Bagh is another famous garden on the shoreline of Dal Lake and is considered the high point of Mughal horticulture. It was built by Mughal emperor Jahangir to please his favorite queen Noor Jahan” light of the world”. Although historians trace the existence of this garden to the 2nd century, this exquisite garden came into prominence under the Mughals. It was the imperial summer residence and Royal court of the Mughals, especially during Jahangir’s reign. Shalimar Bagh was built in 3 terraces, “Diwan-e-Aam”/ public audience hall, “Diwane-e-Khas”/private audience hall, and Zenana terrace for the harem ladies. It has beautiful avenues of chinar trees, 410 fountains, and trellised walkways lined with aspen trees, all against the lovely backdrop of snowy mountains. The unique feature of this Bagh is chini khanas or arched niches behind garden waterfalls. These niches used to be lit up with oil lamps at night thus giving the garden a fairy tale appearance. Nowadays they hold flower pots whose brilliant colours are visible from behind the cascading waterfalls. This garden is supposed to most beautiful during spring and autumn because of the changing colours of the chinar trees. Amir Khusrau’s famous couplet is inscribed on the top terrace of Shalimar Bagh. It aptly says'” if there is paradise on earth, it is this, it is this, it is this.” Jahangir on his death bed too was credited to have said, “Kashmir, the rest is worthless”.