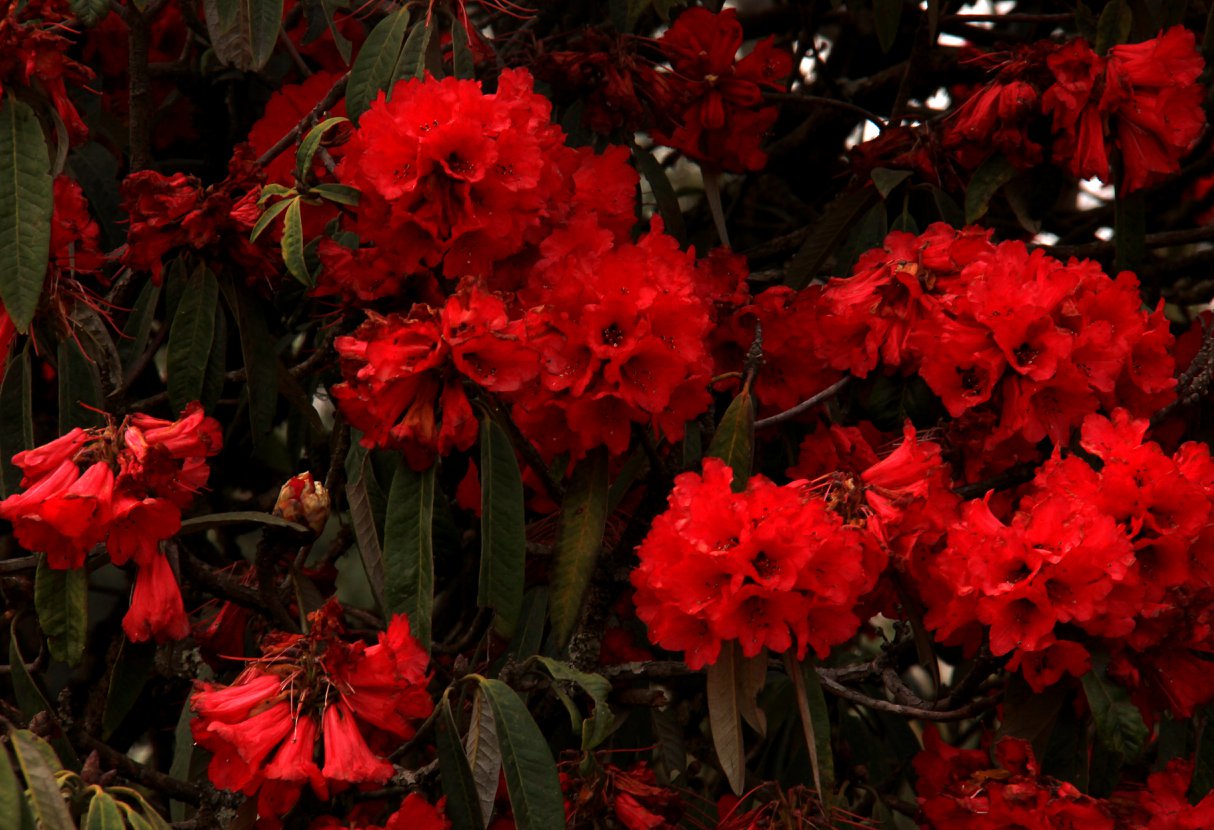 Our trip to Okhrey, a lesser known gem of West Sikkim

I discovered Okhrey by chance. It was the base of my trip to the Barsey Rhododendron Sanctuary in Sikkim and I liked the homestay there. In fact, I stumbled upon the homestay online even before I came to know about Okhrey, and the warm, homey place sealed the deal. Royal Barsey Homestay popped up when I searched online for accommodations near Barsey Rhododendron Sanctuary and it kind of gave me an idea that Okhrey might be quite an offbeat destination. I enjoyed Okhrey more than Barsey, the main reason why I went so high in the mountains and that was an epic, crazy adventure. In fact, that Sikkim trip is the perfect example of Roy M. Goodman’s quote, “Happiness is a way of travel – not a destination”. Everything which could have possibly gone wrong went wrong on that trip and in the end, I was relieved to come down to good, old Darjeeling.

A spring trip to Okhrey cut short by a landslide

That was a pity because Barsey or rather Okhrey in India was a very pretty place, one where I would have loved to stay longer. It is so idyllic that most travellers going there on Sikkim Honeymoon Packages. They relax, rest, and bask in romance in the lap of nature. For us, however, a landslide marred our plan and I rushed back to safety after spending only 3 days there. Those were, however, three very beautiful days and I enjoyed my brief stay at Okhrey. The mountain was crisp and clean, the weather was cool, and the Sikkim spring made the flowers bloom riotously. Despite all these, the landslide in the middle of the night scared me a lot and when traveling with a baby alone, you cannot afford to take chances.

Akash and his new friends at Okhrey

Visiting Okhrey at 10,000 feet along with a baby

I visited the Barsey Rhododendron Sanctuary last year with Akash. It was after our wonderfully relaxing stay at Ghoom and mass blooming of rhododendrons attracted me to go higher up the mountains. When I say higher, I mean really high, and to be in Barsey is to be in the shadow of the mighty mount Kanchendzonga. Located at 10,000 feet above sea level Barsey Rhododendron Sanctuary is located in southwest Sikkim. It sprawls over more than 100 sq. kilometers across the jagged Singalila Range and can be accessed by three points namely Hilley, Okhrey, and Soreng. We chose to enter the sanctuary via Hilley and it was a 30 minutes drive from Okhrey, the village where we were staying.

Reaching Okhrey which served as my jumping-off base for Barsey Rhododendron Sanctuary was an adventure in itself. We went there by public transport and it was an epic adventure. Though a very cheap mode of transportation, using public transfer in the mountains is not a child’s play. A lot of planning ahead is required for that and when you are traveling alone with a baby, the responsibility doubles. Co-incidentally, my solo woman traveler status with a baby actually worked in my favour and the people of Darjeeling and Sikkim are extremely child-friendly. Most of them went out of their way to make us comfortable and some even took turns in playing with Akash during the drive to Jorethang, the main public transport hub of West Sikkim. They were all locals who were either on their way home or going to work. The women knitted and chatted while the men stoically stared at their mobile phones. I was the only one who stared at the picturesque scenery outside the window and it was an extremely beautiful drive.

You may also like: Slow Traveling in Dharamkot in Himachal Pradesh

The drive from Darjeeling to Jorethang

The hilly terrain alternated between lush tea gardens, bamboo groves, scattered waterfalls, and quaint hamlets. Flowers grew everywhere and roosters crowed atop sloping red-tiled roofs. Busy tea picking ladies with their backs strapped with the wicker baskets, flitted in and out of the plantations and the snow-clad Kanchendzonga accompanied us through every twist and turn. The mighty mountain stayed faithful throughout the bumpy ride until I reached Jorethang after which she disappeared behind the deep V-shaped valley. Akash thankfully was easy throughout the drive and at Jorethang after a quick lunch of momos (local dumplings), he fell asleep. At Jorethang my luck ran out and there was no public transportation to Okhrey available. The local taxi drivers taking advantage of my position fleeced me badly for a private taxi ride to Okhrey and I am also a very bad bargainer.

Recommended Read: How to enjoy Bir Billing without paragliding?

A view from Jorethang to Okhrey

Jorethang to Okhrey along the Teesta and Ringit rivers

The drive to Okhrey turned out to be prettier than the previous stretch and this mile was filled with lovely Buddhist prayer flags. Orchids, lilies, and vulgar-looking ladies’ slipper flowers sprang out of nowhere. The road was in better condition than the previous one and freshly cultivated rice terrace bordered on both sides. After Sombaria village, the drive became steeper when suddenly beautiful rhododendron bushes popped up like lovely surprises. They came in deep shades of pink and red and added brilliant splashes of colour to the hilly landscape. Okhrey arrived with masses of blooming magnolia and rhododendron trees and the village was storybook pretty. The long drive seemed worth it as Akash and I spent a delightful afternoon playing with fluffy mountain dogs under blooming rhododendron trees.

Blooming rhododendrons and Okhrey at last

We stayed at the friendly Royal Barsey Homestay and we could see dazzling snow-clad mountain peaks from the window of our room. Food was delicious at Royal Barsey, the service warm, and the internet was intermittent. It was a potent combination to unwind and relax and Okhrey in West Sikkim ended up soothing our month-long India trip aches away. The next day, I planned for a morning drive to Hilley, from where a local woman guide was to accompany us through the gorgeous Barsey Rhododendron Sanctuary. There is a saying called, “Man proposes but God disposes” and read the next post to know about our Barsey Rhododendron Sanctuary adventure. Do you think we made it?

Even though Okhrey is mostly overlooked as a jumping-off base for Barsey Rhododendron Sanctuary, the pretty village is worth a longer stay.

How to Reach – The nearest airport to Okhrey is the Bagdogra Airport (IXB) which is in Siliguri. It is nearly 130 kilometers away and requires an 8-9 hours drive. The nearest railway station, New Jalpaiguri (NJP) Railway Station is also in Siliguri.

The Route from Siliguri to Okhrey – The route to Okhrey via Darjeeling and Jorethang from the airport or the train station is mountainous. Expect long driving hours and sharp curves. People who have mountain sickness or vertigo should sit near the window. The route from Darjeeling to Jorethang goes mostly downhill and the road is in bad condition. Expect bumps and jolts. There is regular shared jeep service from Darjeeling main market to Jorethang (vice versa) and the drive takes around an hour. There are shared taxis available from Jorethang to Okhrey and this also takes around an hour. You can reserve two seats in the front for more comfort. The return route from Okhrey to Darjeeling goes onward to Siliguri to reach the Bagdogra Airport or the NJP station.

Reaching Okhrey from other destinations in Sikkim and West Bengal – It takes nearly the same time to reach Okhrey from Gangtok. Pelling and Namchi in Sikkim are closer to Okhrey. While it takes around 05 – 06  hours from Darjeeling and Kalimpong, from Pelling the drive takes only 4 hours.

More Travel Info – The nearest town from Okhrey is Sombaria and it is at a distance of around 20 kilometers. Regular jeep services are available from there to Jorethang. The picturesque route from Bagdogra Airport (IXB) / New Jalpaiguri Railway Station (NJP) goes along the River Teesta till Teesta Bazaar next to Jorethang and Sombaria. After Teesta Bazaar, the road is along the River Rangit.

Best time to visit Okhrey – From October to January, you can enjoy the magnificent views of Mt. Kanchenjungha in Okhrey. To see the rhododendrons in full bloom, you should visit Okhrey from mid of March to mid-April every year. Birdwatching can be enjoyed throughout the year.

Where to Stay and Eat – There are three different types of accommodation available in Okhrey. These range from Deluxe Guesthouses, Budget Lodges, and Homestays. The accommodation options come with facilities that are dependent on the price range and may or may not have attached western bathrooms, room heaters, geysers, and TVs. Trekking packages along with guides and equipment can be arranged at these accommodations. Dining facilities are mostly restricted to the accommodations and the food served is a local cuisine. Momos, thukpas, Indian bread, and curries are usually served and you can request vegetarian options.

Things to do in Okhrey – Trekking is the most popular activity of the people visiting Okhrey. Local hikes are also quite popular. Most visitors reach Hilley by car from Okhrey (10 km) to begin the 4 km long Hilley – Varsey Rhododendron Sanctuary trek. The Barsey Rhododendron Sanctuary offers excellent views of Mt. Kanchenjungha and endless stretches of Rhododendrons in their array of red, pink, and white colours. Birdwatching can also be enjoyed at Okhrey.

Places to Visit near Okhrey – There is a beautiful Sai Temple in Daramdin just 28 km away. Other nearby attractions of Okrey are the Jureli Dara viewpoint which is 18 km away. The Anden Olong Monastery is 20 km away. Kitan Falls, Dodak Helipad, and the Butterfly Shape Valley are the other mentionable places to visit near Okhrey. You can visit most of these destinations while traveling from Somabaria to Okhrey. Other attractions from Okhrey are the Devi Falls, Gathang alls, the EPC church (one of the oldest churches of Sikkim), and a Lepcha Museum.

Drive from Jorethang to Okhrey

Along with myriad flowers

During our stay in west Sikkim.