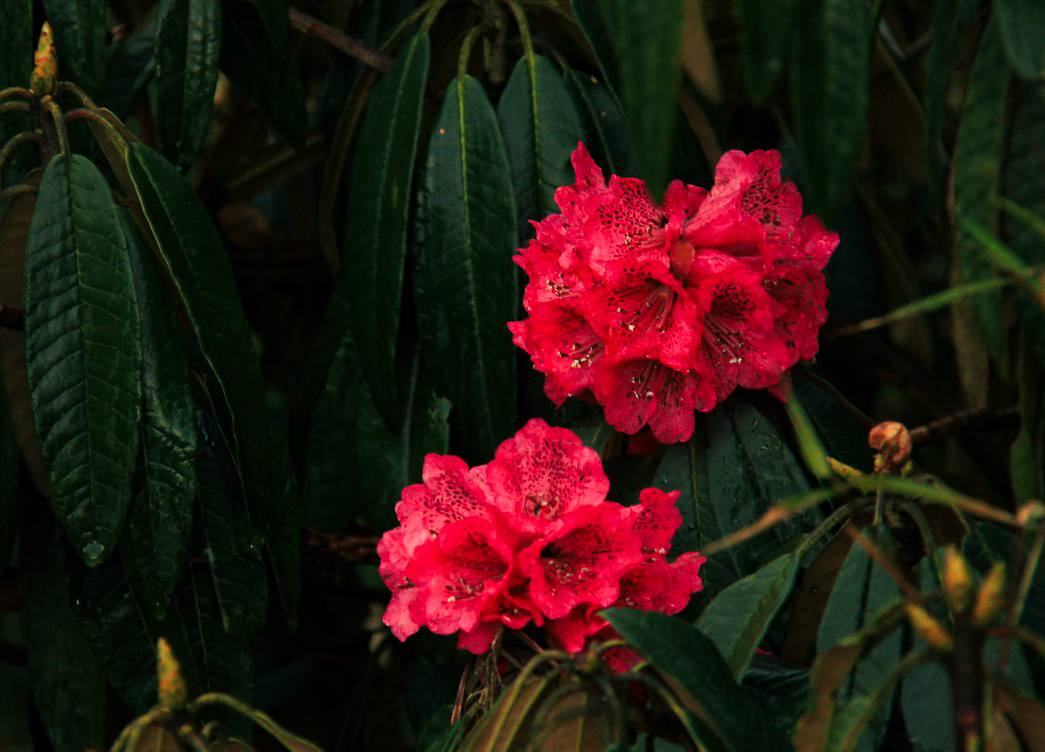 Missing the rhododendrons at the Barsey Rhododendron Sanctuary in Sikkim

“You are too early to see Gurash in full bloom”, claimed Sonam, the Royal Barsey Homestay owner. We were her only guests for dinner that night and she tried to dissuade me from visiting the Barsey Rhododendron Sanctuary the next morning. “Go to other places nearby. Visit the monastery or the waterfalls. There is not much Gurash blooming any way (gurash being rhododendron in the local language). Why do you want to drag a baby there?” I looked outside the window and saw rhododendron blooming riotously all over the village of Okhrey. Her persuasion thus came across as very odd to me and I secretly believed that she just wanted to spend time with baby Akash. Sonam and Akash clicked as two peas in a pod from the very first moment of our arrival and she would do her chores carrying him around in her hip. She cooed sweet nothings in his baby ears, sang him lullabies, and often gave delicious titbits from her kitchen. Akash being a foodie like his mum, it was perhaps the last part that sealed the deal.

I, however, kept insisting until she relented and we planned to leave for Hilley the next morning at eight. Unable to change my mind, Sonam decided to do the guiding herself and I was surprised to know that she was a trained guide with a degree in Botany. The next morning, the Okhrey sky dawned grey and gloomy. It was also very cold, but then Sikkim is known to be a wet, moist state with unpredictable weather. Despite having second thoughts, I went ahead with the plan, packed Akash in warm clothes, and went to meet our hostess/guide. An early riser, Sonam by then had already finished her morning tasks left the rest of the chores of the homestay on her teenage boys and had her husband ready to drive us to Hilley, which was one of the entry points of the Barsey Rhododendron Sanctuary. The drive to Hilley went through a few hamlets, past strings of local school children and lots of flowering rhododendron trees. You can imagine how my expectations soared when throughout the short drive, all I saw were masses of dark pink, light pink, red, and white gurash blooming abundantly at every turn.

Where are all the flowers gone?

Reality came as a rude shock at Hilley, which is, by the way, the last motorable point before the Barsey Rhododendron Sanctuary officially began. Being at a higher altitude, it was much colder there and most of the gurash trees were covered with pointy tightly closed buds. Hardly any tree bore flowers and some buds even had ice daubed on them. Suddenly, Sonam’s protests made a lot of sense and I understood that we were too early to see rhododendrons blooming at Barsey in full glory. The weather needed to get warmer for the famous lush flowering to occur there. Okhrey being at a lower altitude had trees full of flowers and I left that to climb higher to witness the same thing.

You may also like: Spring flowers at Badamwari in Srinagar

Hailstorms at Hilley, the starting point for Barsey

I was mussing over the irony of the situation when big fat hail pelted from the sky. We rushed back to the car, which was by now filled with Sonam’s acquaintances and waited for the sky to clear. The local ladies gushed over Akash, coddled him, and while his mum sat scowling, he lapped up the attention happily. The hail stopped with the clearing of the sky and in the horizon, we could see the snow-white Mount Kanchendzonga. That was one of the most beautiful sights I have ever seen and made the drive to Barsey Rhododendron Sanctuary worthwhile.

White rhododendrons are rare to see.

The “Sleeping Buddha” awoke after the hailstorm

After the sky cleared, I decided to enter the sanctuary for a walk. It is locally believed that “To be in the Barsey Rhododendron Sanctuary in Sikkim is to be in the shadow of Mount Kanchendzonga. From amid the gorgeous flowers, and the birds and the bees, you live for a short while under the benevolent gaze of the “Sleeping Buddha”. The Kanchendzonga is called the Sleeping Buddha by the locals and that morning it indeed looked down upon us in a most radiant way. An eerie silence enveloped me, the moment I entered the forest. It was a soft, hushed silence which was broken only by sounds of dripping water and occasional bird calls. The hail storm kept most people away from the sanctuary and I passed no one during my walk.

The “Sleeping Buddha” or the Mount Kanchendzonga

Now that was a kind of silence which gave me goosebumps and my mind kept running to my baby who was happily being minded by Sonam at the gate. We decided that it was perhaps best for him to not leave the prospect of shelter, in case there was another rain or hailstorm. So, he stayed back near the car with Sonam and her friends, while his mum walked through the Barsey Rhododendron Sanctuary alone. To say that the forest inside the sanctuary was dense would be an understatement because at places the trees grew so close that the light almost became too dim. Consisting mainly of bamboo, pine, and rhododendron trees, fern sprang in clumps and moss hung from the branches like wispy green curtains.

A peep of the Barsey Rhododendron Sanctuary

The trail went up and down, with occasional clear views showing endless rhododendron trees covered in buds. During flowering, the sight would have taken breaths away, but at that time, it was a bit disappointing. After all, we came from Okhrey where a large rhododendron bush full of red flowers grew right outside our homestay. I gave up the 4 kilometers hike halfway, took a last look at a few flowering rhododendron trees and eagerly went back towards the gate. At the gate, a beatific smile and two fat baby arms welcomed me and I did not regret missing out the rhododendrons at the Barsey Rhododendron Sanctuary in Sikkim.

A trail inside the Barsey Rhododendron Sanctuary