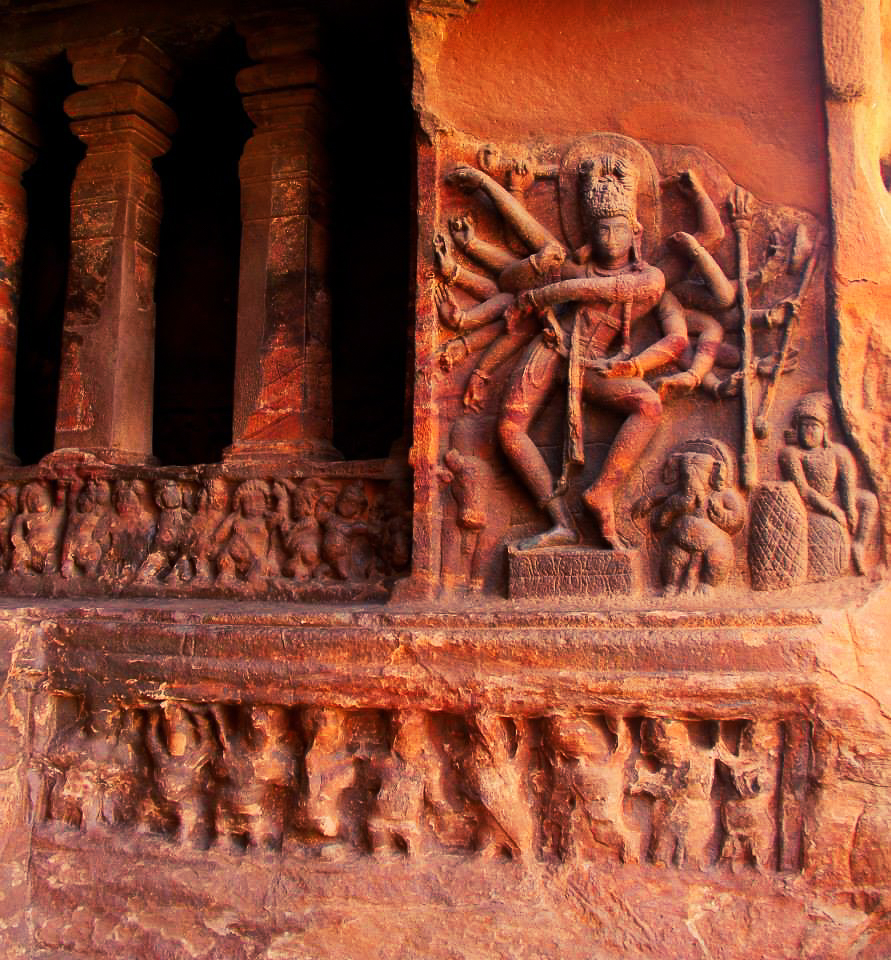 To explore the Badami caves in peaceful solitude, one has to get up early in the morning when the air is cool and the red sandstone hills glow a soft amber. The town hums with slow local bustle and the lack of hot sun provide relief. The pesky local monkeys and langurs seem too sleepy to be annoying and the Agasthya Lake lies tranquil like a sheet of molten emerald. I explored the Badami caves mostly on such quiet mornings and kept the lush countryside for the hot afternoons. The long evenings came with ample time to read about the history of the place and the next day, armed with the knowledge I continued with my explorations.`

The history of Badami caves

Badami caves’ location at the mouth of a steep ravine with rocky hills on either side seems ethereal and its history goes long back as well. Once a lively capital of the powerful  Early Chalukya rulers, Badami was established around 540 AD. It was known as Vatapi at that time. The name Badami is said to have originated from the mega Hindu epic of Ramayana. In the epic, a story mentions two demon siblings, Vatapi and Ilvala who would kill all beggars by tricking them in a nasty way. Vatapi would be turned into a ram by his elder brother Ilvala, who would offer its meat to the guest. Since Ilvala had the boon of recalling anybody he named, even from the netherland, Vatapi would emerge from the guest’s body at his call. The horrible trick claimed many victims who were ripped apart alive with Vatapi emerging from their bodies until the wicked demon brother encountered the learned Sage Agastya. The powerful sage simply digested Vatapi even before Ilvala could call him, thus ending his life at the hands of his brother. The two hills in Badami are said to represent the demons Vatapi and Ilvala and the water flowing from the ravine pour into an ancient artificial lake that is aptly called the Agasthya Tirtha reservoir.

I liked the name Badami more than Vatapi and the hills indeed were as brown as nuts (badam=almond in Hindi). The soft rose-red sandstone of the area was scoured to create the incredible caves and the views from the top were simply gorgeous. Commissioned by the Early Chalukya rulers, the rock-cut Badami caves were sculpted into temples during the 6th and 8th centuries and they are some of India’s most exquisite shrines. The complex consists of Hindu, Jain, and possibly Buddhist cave temples thus representing the secular nature of the Chalukya rulers. Their simple exteriors give way to intricately carved interiors. While Cave 1 is dedicated to Shiva, the 2nd and 3rd caves are devoted to Vishnu. The last cave displays detailed reliefs of Jain Tirthankaras. Design-wise, the cave temples of Badami follow a uniform pattern and the beautifully streaked stony entrance leads to a colonnaded verandah called Mukha mandapa. Lavish carvings cover every inch of friezes below the columns and the main hall of each temple is supported by massive pillars. The womb-like main shrine is located in the deepest part of the temple and some caves show faint traces of beautiful murals.

Details of the stunning carvings

The first cave, which was built in 575 – 585 AD is predictably the oldest, and nearly 40 stone steps lead to its entrance. The mouth of the cave contains 4 square columns and semi-columns, under which heavily carved friezes depict ‘ganas’, the attendants of Lord Shiva. The ceiling of the Cave 1 is decorated with couples in amorous poses and it contains some of Badami’s most famous reliefs. The most exquisite ones are Shiva and Parvati within a coiled serpent along with the iconic 18 armed Nataraja, frozen immortally in nearly 81 dance poses. The 2nd and 3rd Caves are filled with depictions of different avatars of Vishnu and the artwork in Cave 3, provides glimpses of the local culture and clothing trends of the 6th century. The 4th Cave denotes 6th century Jainism and its sanctum is adorned with a relief figure of Mahavira, whose pedestal contains an old Kannada inscription of the 8th century A.D. The interior of the Jain cave is filled with scores of intricate Thirthankaras engraved in the inner pillars and walls.

Apart from the exquisite rock-cut temple architecture, Badami caves are also archaeologically significant for their wealth of inscriptions. Nearly 18 cliff inscriptions written in ancient Kannada and Sanskrit languages have been found, with the oldest dating back to 543 AD. While the cave temples of Badami provide huge sources of information on the ancient Chalukyan times, the area is strewn with numerous smaller shrines and inscriptions scribbled on rock faces. One of the most important 700 AD inscriptions is located at the northeast end of Agasthya reservoir and it contains 10 lines in Kannada and Sanskrit languages. These lines are accredited to the greatness of Kappe Arahatta, local saint and hero. A very pretty carving of a ten-leaved lotus in a circle lies underneath the inscription thus making it appear like abstract art. This very blend of the present and the past sensibilities, the insignificant and the glorious, entwining together into one timeless tapestry of nature, culture, and archaeology is what I had loved the most about Badami.

The merging of the old and the new

I loved the way nature was cleverly integrated into the creation of the Badami caves and this smart move helped them withstand the ravages of time. Interestingly, the present villagers too seem to have been inducted into this style of living and the little hamlet scattered at the foot of the sandstone hills, seamlessly blend into its atmospheric surroundings. With little banyan tree-shaded squares holding fresh produce markets, narrow residential lanes merging uphill into the sandstone caves, and traces of royal Chalukyan ruins lying interspersed among the commoner’s dwellings of today, Badami is what real India is all about. Rustic and idyllic with modest pride in its erstwhile glory.

Carvings on the ceiling

The archaeological museum of Badami has Nandi, Lord Shiva’s bull, at its entrance. This museum is closed on Fridays. It houses superb examples of local sculptures, including the remarkable Lajja-Gauri images of a fertility cult, which flourished in the era.

Important temple festivals in Badami that you can visit

Carvings on columns inside the Badami caves

Other Places of Interest around the Badami caves

How to reach Badami

Badami is situated in the Bagalkot District of Karnataka, 30 km away from the district headquarter. The major nearby towns/cities include Bijapur (120 km), Gadag (70 km), Hubli (105 km), and Hospet (130 km). It is approx. 420 km away from Hyderabad and 500 km away from Bengaluru.

By Bus from Bangalore

Government public buses are available from Badami to Gadag, Bijapur, and Hubli, which are further connected to the major cities of India on the road and rail network. There is no direct bus available between Bengaluru and Badami. But you can get a direct bus from Bengaluru (Two buses daily, NON AC SLEEPER 1945 Hrs, Fare: INR 630 and RAJAHAMSA EXECUTIVE 2100 Hrs, Fare: INR 542) to Bagalkot. This journey takes approx. 10 hours. From Bagalkot, catch another bus to Badami.

By Bus from Mumbai

A direct bus is also available from Badami to Mumbai. It starts from Badami at 1700 Hrs and reaches Mumbai Kurla Stand at 0900 Hrs via Bagalkot, Bijapur, Sholapur, Pune, and Panvel.

By Bus from Hyderabad

There is a small train station at Badami, which is about 5 km away from the town and it has a direct train from Hyderabad (17320 SC UBL Express, 3-days in a week) along with two trains are also from Bengaluru ( 19405 Ahmedabad AC Express (via also from Mumbai), weekly and 16535 Solapur Express, Daily). Some other trains running between Hubli and Bijapur junction also stop at Badami station. Gadag, Hospet, Hubli, and Bijapur are major railway stations located near Badami.

There is no airport at Badami. Nearby major airports are located at Hyderabad and Bengaluru. (Credit and for more Badami travel guide check out Solobacker.

Exquisite remnants of a glorious civilization.

It was an ancient powerful kingdom.

This is Badami, a crowning jewel of the Chalukyas of yesteryears.

Today it is a beautiful place,

Where nature and archaeology blend

Along with rustic life

one of the loveliest

Places I have ever visited.