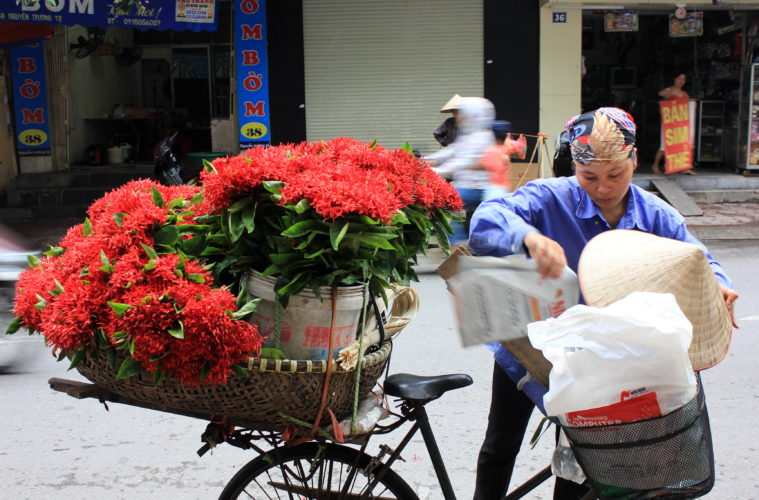 Vietnam was a great learning experience for me. I was young, mostly clueless, giddy with freedom and very unprepared for the harshness of solo travel. Yet, I traveled solo to Vietnam, had equal moments of happiness, awe, and repulsion. While repulsion might be a very strong word to use for a destination which is very popular for its exotic charms, I sometimes found myself having emotional meltdowns there. My inexperience, no doubt is much to be blamed for it, but during that trip, I developed a dislike for North Vietnam, especially Hanoi.

The flower sellers are a common sight of Hanoi

A terrible beginning in Hanoi

My unpleasant experience in Hanoi started upon my arrival and I got ripped off by a taxi driver at the airport. It was way past midnight and the guy just took advantage of my being stranded there without a reservation. The drive to the hotel recommended by him was worse and I had a terrifying (and minor accident) with a flower transport van. The hotel where I finally decided to stay in Hanoi was in the Old Quarter and though with loads of character, it was full of cons. The owner was a total sleazebag, who not only overcharged me but always lingered closer than I liked. During my stay, Hanoi experienced a massive typhoon and as luck would have it, I fell sick as well. Once again, I got ripped off with inflated doctor and medicine bills and was heftily charged for the soups the owner brought to me in the guise of kind gestures.

Recommended Read: MY VIETNAM TRIP IN A NUTSHELL

Upon confronting him at the time of check-out, he not only started getting aggressive but behaved in the most disrespectful way. He started yelling, shoving the bills which were in Vietnamese on my face, and stopped only after I paid. It was my most expensive stay in a regular hotel in Asia and by that time, I was desperate to get out of Hanoi. The menacing rain had marred my experience, restricted my travel plans, and the people had succeeded in making me dislike Hanoi intensely. The utter disrespect with which I was treated was too blatant to ignore and I had a feeling that they enjoyed ripping off the tourists. As harsh as it might sound, there have been many occasions on which I was not only overcharged but also made fun of in Vietnamese by the vendor as she successfully ripped me off by more than double the actual price.

My first impression of Vietnam was Hanoi

My Hanoi people watching from a distance

All these first impressions did not make a fan of Hanoi and it is a pity since the Old Quarter where I stayed was an exceptionally photogenic place. There was a lot going on at the Old Quarter at any given time and in the evenings, it exploded with action. Motorcycles whizzed in endless streams, light bulbs twinkled under the steam of pho pots and people ate, smoked, and gossiped. Evenings were the times when many people ceased working and the usually cold, standoffish locals were visibly more relaxed then. The mornings were a sharp contrast to this bustle and the first half of the days belonged more to the housewives, vendors catering household needs, and schoolchildren. More flower and fruit sellers peddled at that time and there were fewer motorcycles on the streets. There were, however, barbers, cobblers, butchers, and cold beverage makers who did brisk business and I usually liked to explore Hanoi during that time.

You may read similar experiences of Hanoi by other travel bloggers: Check out Nomadic Matt, Ana Everywhere, and Wander Wisdom

People watching in Hanoi is a lot of fun

Would I return? Hanoi, No but to Vietnam, Yes

Such were my Hanoi moments and this is more of a rant post rather than a regular travelogue. The photographs shared here are mostly taken from the balcony of my room and I spent a substantial amount of time people watching from there. Even today, as I think of it, I cannot recollect Hanoi without a shudder and it hurt more since I had really looked forward to enjoying Vietnam. However, I did enjoy Vietnam and actually fell in love with the country as I traveled away from Hanoi. You will find out all about in the upcoming posts and here allow me to share my paltry love for Hanoi. Vietnam does get better than this, trust me!

Is one of the best entertainments in the city.