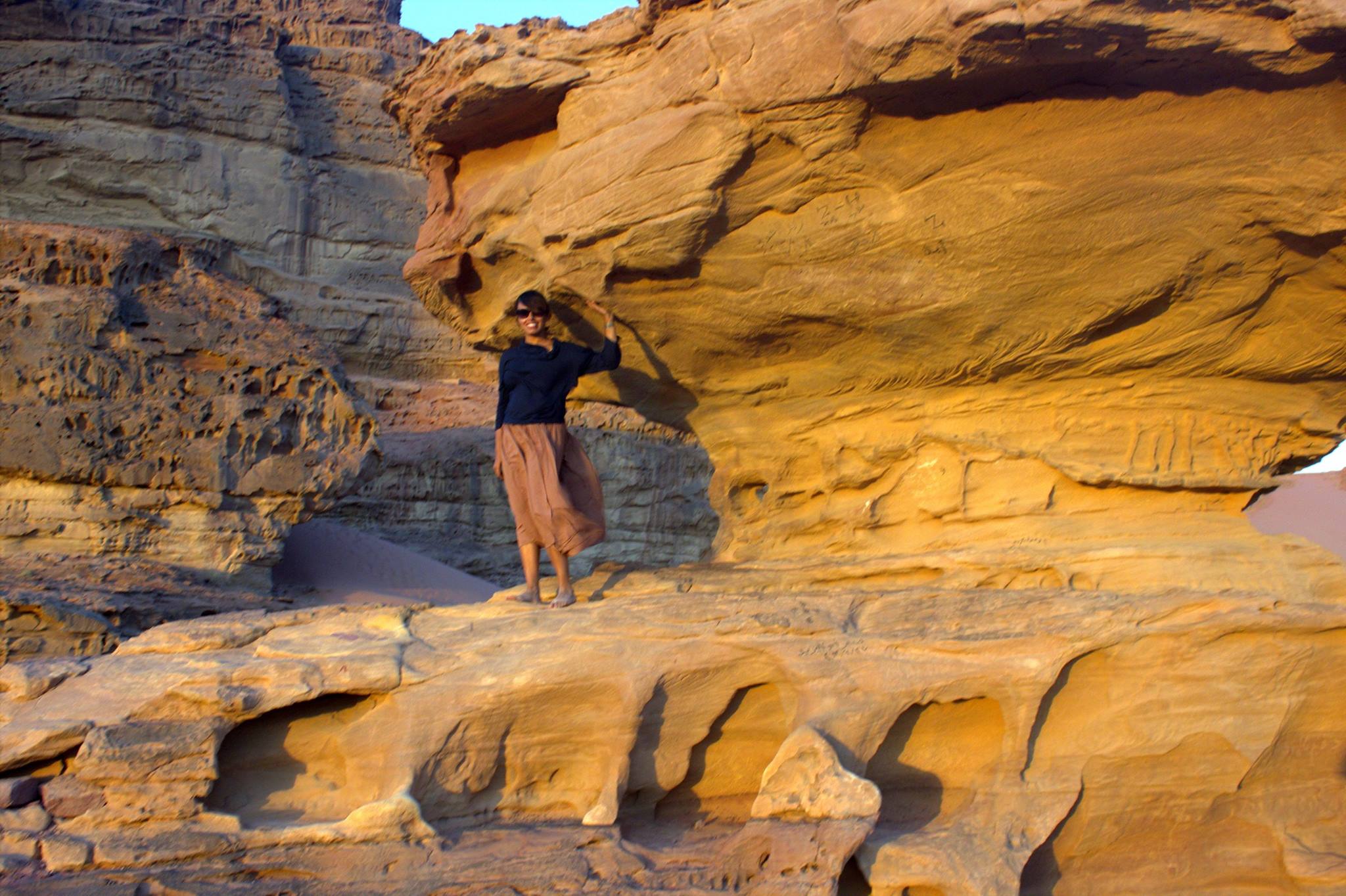 Wadi Rum and a sky full of stars

Wadi Rum was just a few hours drive and we reached there just before sunset. One of the most spectacular natural environments in whole of Middle East, Wadi Rum or the Valley of the Moon, is a major highlight to any Jordan trip. Located in the southern part of Jordan, it is a scenic desert valley covering a vast isolated area of 720 kilometers. It is famous for its dramatic desert wilderness marked with huge sandstone mountains, granite rock faces, unique rock bridges, wide sandy valleys, narrow canyons and ancient rock carvings. The stunning desert landscape is reputedly most beautiful in the soft light of dawn or dusk, when shadows draw strange patterns and grooves and create whirls across the rippling sands. At some places, the rocky mountains reach nearly 1700 meters before dropping off dramatically into deep hidden valleys.

It was huge, wildly beautiful and with hardly any real infrastructure. Bedecked with a very interesting history which goes back to pre historic times, Wadi Rum, Jordan’s largest wadi was full of mystery, intrigue and space. Inhabited by many human cultures for centuries, evidences of their existence lay scattered in rock carvings, Thamudic inscriptions (Thamuds were nomadic cousins of the Nabataeans) and a half ruined Nabataean temple. Bedouin tribes (nearly 7 different ones) still live among the deserts and mountains of Rum and their large goat skin tents are an integral part of the wadi’s scenery.

The desert which looked similar to our eyes was actually intersected by 3 clearly defined tribal areas-that of the Zalabias, Zuwaydeh and Sweilhieens. The Zalabias are in majority and largely responsible for the Wadi Rum eco tourism. The other tribes like Sweilhieen, Zuwaydeh, Omran, Dbour etc live in the more remote areas and while most local Bedouins have become villagers, they still maintain flocks of goats for milk, meat and “jameed”, a special kind of yoghurt. Many a times for a few months, some families or family members return to their wandering roots and resume their nomadic lifestyle with their flocks, although their traditional Bedouin lifestyle is nearly at the brink of dying out.

Yousef dropped us off at the Rum entrance and introduced us to his white gowned, head scarved Bedouin friend Mohammad , who was to be our Wadi Rum guide for the next 2 days. Declared as a protected place and UNESCO World Heritage Site, entry to Wadi Rum is both chargeable and restricted. We paid the steep entrance fees, bid Yousef good bye  and happily hopped onto Mohammed’s jeep for a mini desert safari.

TRAVEL TIP – Most visitors enjoy Wadi Rum’s spectacular beauty by jeep, camel, foot or horse. Adventure lovers can also go for climbing and trekking there. However services of registered licensed guides are required for those activities, since most of the Wadi is protected and inaccessible. There are quite a few Bedouin camps, both luxurious and wild, basic ones, scattered across the Rum and camping on a pitch dark desert night under a huge canopy of stars has been rated as one of the highlights of a Jordan trip by most travelers. Most of the deluxe sites are outside the protected area near the village of Disi and there is also a permanent campsite in Rum village. There are no hotels in the vicinity of Wadi Rum and the nearest ones can be found either in Aqaba and Petra, which are both around 2 hours away by car or bus.

Lou and I were staying for 2 nights at a Bedouin camp located inside the protected area and we both looked forward to it. Bone tired and weary, we eagerly wanted some hot tea, hammocks and soft desert sunset. Mohammad drove us around before heading to the campsite and the soft evening air felt great on our faces. The wadi was bathed in shades of red and the granite mountains appeared like solitary islands on an endless sea of sand. Mohammed stopped somewhere to show us Lawrence’s House (of Lawrence of Arabia fame) and while we had no interest in the World War I British war secrets, Arab Revolt against the Ottoman Rule and T.E Lawrence stories we ambled behind him to stretch our legs. Site of many legendary movies, including the iconic Lawrence of Arabia, Transformers etc it was beautiful beyond imagination. Built on the ruins of a Nabataean temple, T.E Lawrence’s house was just a pile of rubble but it was where he supposedly stayed or stashed his weapons during his highly controversial military run with the British forces during the Arab Revolt. Whether Lawrence of Arabia was a true hero or a horrible betrayer, we would never come to know, but to relive his thrilling adventures there at his house was simply an out of the world experience.

The sun dipped low in the sky and the entire Rum was washed in red. The air cooled drastically and we could not help running over the magnificent desert like children. It was definitely one of the most beautiful places I had ever been and the huge sense of space made us giddy with joy. We clambered over the rocky outcrops, traced wildlife foot prints on rolling sand dunes and took in the seemingly endless expanses of magnificent Wadi Rum wilderness. The sun disappeared over the horizon and the desert colours deepened further. Mohammed’s pristine white dress got tinted with blushing pink, as he rushed towards the campsite. A strong insinuating aroma of charcoal barbecue and glasses of sugary hot, mint tea welcomed us and we immediately fell in love with the warm Bedouin hospitality. Dinner was served soon and even at the cost of being seemingly aloof, Lou and I took our meals away from the gaggle of guests.

The night breeze was velvety soft and the sky overhead was crowded with stars. Only the glimmer of camp bonfire flickered nearby and hoarse, rustic Bedouin voices rose in songs meant for entertainment of the guests. For us, we needed no entertainment. We had us, Wadi Rum and the eternity of diamonds in the sky. Star struck, we had found our slice of heaven at the beautiful Wadi Rum.

We happily rushed away from Jerash

Yousef dropped us off near the entrance

And Mohammad took over

We ran all over the wadi

Stunned by its unbelievable beauty

Into its wild remote

And we relaxed under

A sky full of stars

At the magnificent Wadi Rum