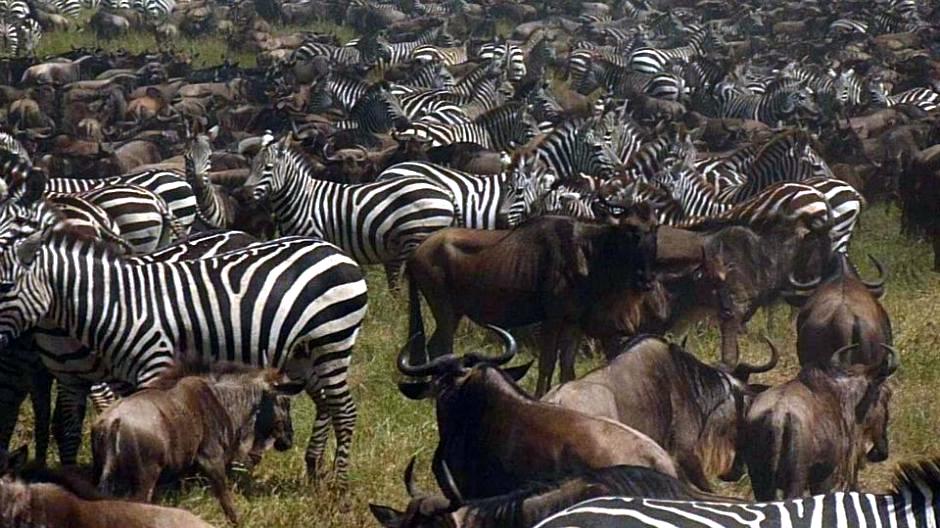 This is Serengeti National Park

Serengeti National Park is just three hours away from Ngorongoro Conservation Area. It was midday by the time we left the collapsed ancient caldera and a hot sun blazed on the stony unpaved path. The much-used road was dusty and bone white and convoys of safari jeeps rumbled in it. Our vehicle too was part of one such convoy and our bone-jarring drive halted often to let a Ngorongoro wildlife resident pass. In the brightness of the day, the animals roamed fearlessly either in packs or as singles and zebras stood motionless in the middle of empty tracts. The species of animals were as varied as the wildflowers which dotted the meadows and lanky ostriches scooted away at the sound of approaching vehicles. With most of the animals scurrying away from us as fast as possible, only the graceful pack of elephants and a solitary rhino moved in slow, dignified steps. Beautiful, mighty and full of poise, their aura, however, waned in front of the king of the jungle and the African Lion simply decided to sit right in front of the convoy, without giving us a glance.

The departing sight at the Ngorongoro Crater

Heading over to Serengeti National Park

That was somewhere in between Serengeti National Park and Ngorongoro Crater and the lion family became the highlight of our morning. With an ambling walk befitting the royalty, the lion slowly padded away from his napping queen and cubs, while pretending as if we did not even exist. He then nonchalantly stretched himself in the middle of the road and sat there completely immobile in the sun. It was quite obvious that he did not fear us and the experience turned out to be a great ego tussle, one which the lion obviously had the habit of winning. Thus, knowing our place in his kingdom, we waited patiently for the king to let us pass and thankfully the presence of a younger male lion creeping towards his family got him back off from the road. He struck at the intruder with lightning fast speed and we gaped slack-jawed at the senior lion celebrating his victory, with a quick “roll in the hay” with his queen. The sated pair then started their post-coital nap under a thorny bush and we finally moved on towards Serengeti National Park with impressions of a lifetime.

We headed towards Serengeti National Park

The world of the wild was mesmerizingly orderly. There was an unbroken hierarchy of reverence which seemed to help the species preserve their numbers, despite the food chain. Ngorongoro’s dramatic morning incident showed us a glimpse of its efficient functioning and after that, the rest of the drive was a bit bland in comparison. Post lunch, the arrival of the lovely soda lake Magadi created ripples of excitement and we took endless photos of the deep pink flamingo colonies. They were our second highlight of the morning or so we thought until we saw the incredible gathering of the wildebeest and zebras near the narrow Grumeti River. Serengeti National Park officially began there and it brought along the iconic annual gathering of hundreds of nervous animals.

The tapestry of nervous stripes and dusty browns

Though it was June, the wildebeest and zebras were already preparing for their big move and the frisky animals were on alert. From a distance, they resembled an unbroken tapestry of stripes and grey-brown and clouds of dust rose underneath the massive nervous stomping of the herds. The animals butted, played, and brayed out calls to each other as they waited for their natural instinct to make them bolt. The large gathering drew a lot of predators as well and they kept a sharp lookout for the isolated young, weak, and the old.

Experience the lawfulness of the animal world at Serengeti National Park

Interestingly, among the predators, a clear hierarchy was maintained and while the scrawny hyena packs circled around the trees, the lions, cheetahs, and the leopards stretched atop the branches. The treetops were occupied by groups of vultures and in small rain-filled pools, crocodiles slithered among submerged hippos. Intense pressure could be felt in that spot and though there was no aggressive movement, the bestial tension was tautly palpable. The Annual Migration is one of the most filmed events in the wildlife and travel television industry and though, I watched many documentaries of the spectacle, the reality turned out to be a mind-blowing experience.

We had a long day on the road

Bits of Masai colours amidst the Serengeti savannah

We left the gathering site after some time and headed deeper into the endless stretch of dry golden savanna grassland. Broken only by intermittent acacia trees and a few rocky outcrops, Serengeti National Park seemed to stretch to the end of the earth and in pockets of green, diamond patterned giraffes made their presence felt. Unlike the Ngorongoro Crater, there were plenty of giraffes at the Serengeti National Park and they nibbled on young shoots alongside Masai grazing animal herds. The Masai villages are the only human habitation allowed inside the national park in Tanzania and the pastoralists signature blue and red shawls stood out starkly against the vastness of the area. It was a beautiful sight, where nature reduced humans to almost tiny points and the harsh afternoon sun made the herders rest under the shade of trees.

Game and bird watching at day and star gazing at night

Pancake flat Serengeti National Park was also hotter than the neighbouring Ngorongoro Crater and the long brown grass camouflaged elephants, lions, leopards, wildebeest, zebras, hyenas, foxes, different birds and all kinds of deer. Though most popular as a game safari destination, Serengeti offers awesome bird watching and the park is home to a large variety of indigenous and migratory birds. The sunsets of Serengeti National Park are of legendary beauty and the evenings set there fast. We headed back towards our campsite to prepare for the night before it became dark and after dinner, gathered around a huge bonfire for warmth. The night temperature at Serengeti National Park dropped abruptly and it became cold enough to wear some warm woolens.

It was a beautiful night and thousands of stars shone brightly on an inky moonless night. The roaring fire enveloped us in a cozy glow and we counted watchful eyes of the wild. Curious white eyes of the wildebeest mingled with the red eyes of deer and we looked around warily for green eyes of Serengeti’s prowling big cats. Thankfully, none were seen and with the softening of the fire’s intensity, we retired to our tents for the night. Despite long hours on the road, I struggled to fall asleep that night and under the glare of a million African stars, I listened, instead to the sounds of the night. The Serengeti National Park a noisy place after sunset and all kinds of calls surrounded our sleeping circlet of tents. Trumpeting, keening, barking, and chirping of a zillion insects saturated the air and undoubtedly, sleeping in the wild at Serengeti was one of the most exciting experiences of Tanzania.

The endless tracts of tall grass hide many predators.

There are also the resident diamond patterned giraffes.

And the sun creates beautiful silhouettes.

Reputed as one of world’s

Is filled with animals

And some of the

I had ever seen.

Was also been our pitstop

For the wild African night.