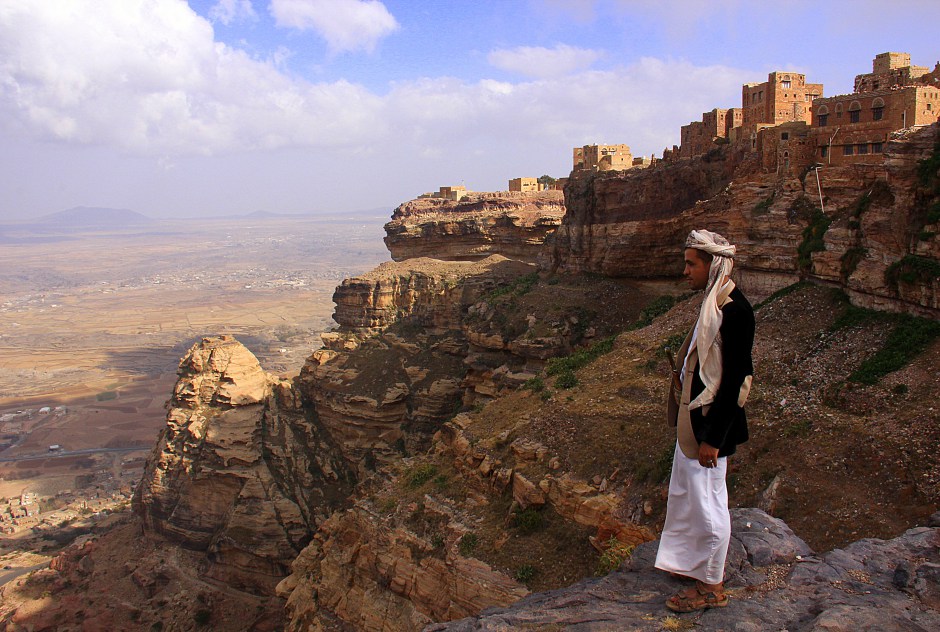 The post landing formalities at Sanaa airport had been very smooth and the single immigration window for non Yemeni passport holders had not been very crowded. Before even applying for a visa, I had pre booked a guided tour and the travel agent had taken care of the invitation letter which is mandatory for people visiting Yemen for tourism purpose. The Socotri guide, who had been recommended by my ex colleague had come to pick me up at the airport and from the very 1st day, we had not gelled very well. He had been an aspiring tour guide, who had been practicing tourism under a registered travel agency’s cover and his too familiar welcoming hug had made me wary of him. Yemeni or Arab men in general are not brought up in a culture where cross gender hugging/touching, as a sign of greeting, is acceptable and that gesture had been the biggest giveaway of his not so nice motives.

I have often been asked whether traveling in Muslim countries as a single woman had come with way too many unpleasant situations and surprisingly, the answer has been “NO”. Personally, I have found that, the tourism friendly Muslim countries take pride in their their solo woman guests and they usually go an extra mile to ensure their safety. In my career as a solo traveler, there have been only 1 or 2 scattered sexual predatory incidents but they have never been too unpleasant to completely mar the experience. The Socotri tour guide had been my 1st and only extremely distasteful travel experience and from trying to get too close to be comfortable, touching unnecessarily and too often to finally requesting to sleep over in my room, his blatant audacity had seriously crossed all limits of professionalism.

Finally, I had gotten fed up with his sly moves and had changed over to another agency, which had not only taken care of my safety, but also ensured that I had a very pleasant time. The new agency had been based out of Sanaa and the owner/guide, Mohammed, had been born and brought up in the old city. A responsible, hard working man, Mohammed had learned English through practice with his guests and had a sound knowledge of Yemeni history, art and culture. Under his guidance, I had not only explored the capital city of Sanaa, but had ventured as deep into the Yemeni countryside, as much, time and tourist safety regulations had permitted. The ancient land of Arabia Felix or Yemen had been a far cry from the barren, deserted stretches of most of Arabia and the old Latin name is still very apt. Coined by ancient geographers, the Latin word Felix means “fertile, blessed and happy” and Yemen had been one of the 3 regions into which the Romans had divided the Arabian Peninsula. While Arabia Deserta and Arabia Petraea had not been very hospitable, ancient Yemen’s misty slopes, endless coastline and lush valleys/wadis had been very productive.

The fertility along with Arabia Felix’s wealth and strategic location in the trade route between India, Horn of Africa and the European world, had lead to the badly crushed Roman military expedition of 26 BCE into Yemen and unfortunately, after that history had kept repeating itself. Today, hardly any traces of Arabia Felix’s erstwhile glory remains and Yemen is the poorest and least developed country of Middle East. The gorgeous old city center of the Houthi capital of Sanaa, however, still remains intact and I could never get enough of it’s enchanting beauty. Sanaa is one of the most beautiful cities in the world and it’s old part is an UNESCO World Heritage Site. Continuously inhabited for more than 2500 years, Sanaa was given an official status of an outpost of the Yemenite kingdoms in 2nd century BC and according to legends, the city had been founded by Shem, son of Noah. It is one of the oldest populated places on earth and nestled in a mountainous valley at 2,200 meters above sea level, Sanaa is also one of the highest capitals in the world.

Thus my Sanaa days had been very pleasant and the evenings had always been nippy. The city experiences some of the most photogenic sunrises and sunsets and the unique architectural style of Old Sanaa can be credited for this magical, mystical aura. Old Sanaa has a spectacular skyline, with towering minarets shooting into the sky and spacious pockets of gardens, caravanserais, mosques, bath houses and souks lie interspersed between densely packed houses and narrow winding alleys. The most striking feature of the old city is it’s thick concentration of rammed earth and burnt brick highrises and they are all individually decorated with beautiful geometric patterns of fired brick and white gypsum. The multi storied towers are built on stony ground floors and their narrow corners filter long fingers of sun rays in a most magical manner. The lovely stained glass windows of the buildings create hundreds of tiny, twinkling rainbows and in the evenings, the dancing naked light bulbs make Arabian Nights dreams come true.

I had fallen in love with Sanaa at 1st sight and had not been too distressed when a cancelled flight had made me extend my stay in the city. During that time, I had visited the nearby places of Thula, Shibam, Kawkaban and Baytbows and each of those explorations had lead to new discoveries of the delightful past of the Arabian Felix. Beautiful, layered and exquisitely rich, my Yemen travels had been an achievement, a beautiful dream come true and sadly, also a tribute to a soon to be lost paradise.

And dripping with old world charm

Arabia Felix had been

A land straight out of