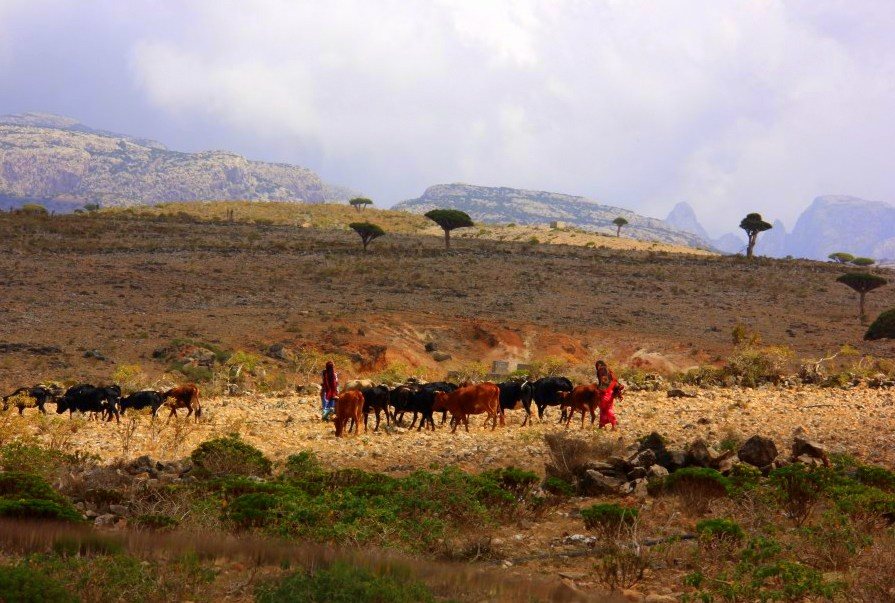 Socotra can be accessed only by flight and only 2 airlines fly there. Felix Airways and Yemenia are the only options and amongst the 2, Felix is most unreliable. They have only 1 aeroplane, which is poorly maintained and they cancel their flights without any notice, every time it breaks down, which is nearly always. Yemenia is reliable, comfortable enough, provides customary inflight service and is on time. The flight to Socotra goes via the arid coastal town of Mukalla and I had been glad to fly out from its suffocating heat within minutes of our arrival. I had stared in exasperation at rolling shades of yellow and blue, as our plane had lifted off from the port city, when a kind Yemeni man seated  next to me, had introduced Mukalla to my naive eyes.

Yemen is a federation of tribes and the Hadramis/the people from Hadramout are most proudly independent. Mukalla is an important port town of Hadramout region and the city thrives on expats settled in Saudi Arabia. Incidentally, Yemen’s rich neighbour is closest at Mukalla and Islam had spread to Far East from there. Many old Hadrami homes have been built from timber brought in from there and a lot of Hadramout Yemeni families have branches spread as far as Indonesia and Malaysia. Although I had been awed by the information, not much of Mukalla’s prosperity had been evident from colourful fishing trawlers bobbing peacefully on the blue sheet of water. The inflight ambiance had taken a turn for the worse when groups of old Yemeni men had played a loud hysterical Arabic video on their phone and had called out to their friends who had been scattered all over the cabin. Perhaps it had been the early start of the day, which had given me a splitting headache and it had become worse as the flight had dipped towards a sunswept island. Yemen had been pleasantly cool, and I had taken to its chilly evenings like fish to water. Mukalla’s heat had been a reality check of what to expect at Socotra and I had found myself wishing for the mainland.

Socotra had arrived with an accompanying heavy tropical air and bright sunshine, and soon I had started feeling too hot in my clothes. I had longed to peel off my covered garments and don cool shorts and t-shirts when hundred of staring male eyes had stopped me in my tracks. Socotrans been looked completely different from the Arab Yemenis and they had been a strange mix of Indians, Malays and Africans. It had been the unfamiliar Socotri language which had set them apart from the South Indians and without that, I would have never been able to tell the difference. I had stared at their strange familiarity, as they had gawked upon my non white tourist presence and it had been quite evident to them that I had hailed from Hind/India. Bollywood songs had immediately rang through the arrival hall as some young Socotris had tried to break the ice with some music from home. It had been my 1st contact with Socotra and the fact that it had to be Bollywood which had bonded us, had not seemed out of place.

Over the course of my travels, Bollywood had come to my rescue multiple times and it had been fun to find out as to how many nationalities could actually identify our movie song and dance routines with my roots. Socotris too had Bollywood songs downloaded on their phones and after a few initial awkward moments, Anwar, my local guide and I had hummed popular tunes from “Dilwale Dulhanya Le Jayenge” (a Bollywood blockbuster). Socotra airport had ended as quickly as it had started and in spite of its small, dingy clawing space, it had functioned absolutely glitch free. Everything had looked spanking new and some countertops had still retained their manufacturing labels. It had been in recent years that Socotra had been opened for tourism and the commercial airport had been constructed in 1999. Before that, the island had remained closed off to the world, with its only access being fishing boats and military aircrafts. Even today, the tourist trickle to Socotra is highly seasonal and strong winds shut down the entire island from June-September.

Those winds bring high seas, during which, even going out of the house becomes difficult for the islanders and for centuries, sailors of Gujarat (in India) had called the maritime route near Socotra, “Sikotro Sinh” or the “Roaring Lion of Socotra”. Incidentally, it had not been Socotra’s only Indian connection and many historians believe that the island had got it’s name from a Sanskrit word “dvipasukhdhara” meaning “island providing bliss”. An Arabic connection to its name (suq = market, quotra = dripping frankincense) brings out Socotra’s real glory and that is the island’s erstwhile wealth, amassed from frankincense, myrrh and other valuable products. Many old Socotrans recount tales of long gone days, when islanders had more wealth than Emiratis and although hard to believe, the island is indeed as ancient as time. Human evidence in Socotra had been traced to pre historic times and inside one of the island’s huge limestone cave, multi lingual inscriptions had been found. From Indian Brahmi, Greek, Bactrian, Ethiopian to South Arabian languages, those scribbles had been left by sailors who had visited the island between 1st century BC to 6th century AD.

Perhaps because of its invaluable bounty of frankincense, myrrh etc or as a pit stop, Socotra has featured in maritime charts throughout centuries and even today, Somalian pirates use the island as refueling stop for hijacked vessels. All this had weighed heavily on my mind, as our rental 4 * 4 had navigated out of the tiny airport into Socotra’s vast open sunshine. A straight road had lead towards the main town of Hadibo and later on I had learned that it had been Socotra’s only road. The first thing which had struck me about Socotra, had been its clean, open sunshine and the misty cluster of highlands in the center. A broad strip of oceanic blue had bordered the road, as we had wound up and down the date palm plantations and ancient looking stone villages. Socotra’s iconic blood dragon tree and bottle tree had appeared like tiny pieces of enticements and I had squealed in joy at the 1st sight of my biggest dream.

Nothing feels better than touching your dream or see it come true, and I had run out of the car to hug the 1st blood dragon tree. It had felt absolutely magical and maniacal and my childish glee had made Anwar smile. That had been the most wonderful start of an exquisite adventure and in retrospect, I had been grateful of its presence. What had followed thereafter, could perhaps be deemed as the biggest travel anti climax and Hadibo, in contrast to the tree’s pristine beauty, had been hell on earth.

And Socotra had arrived

Than my biggest travel dream