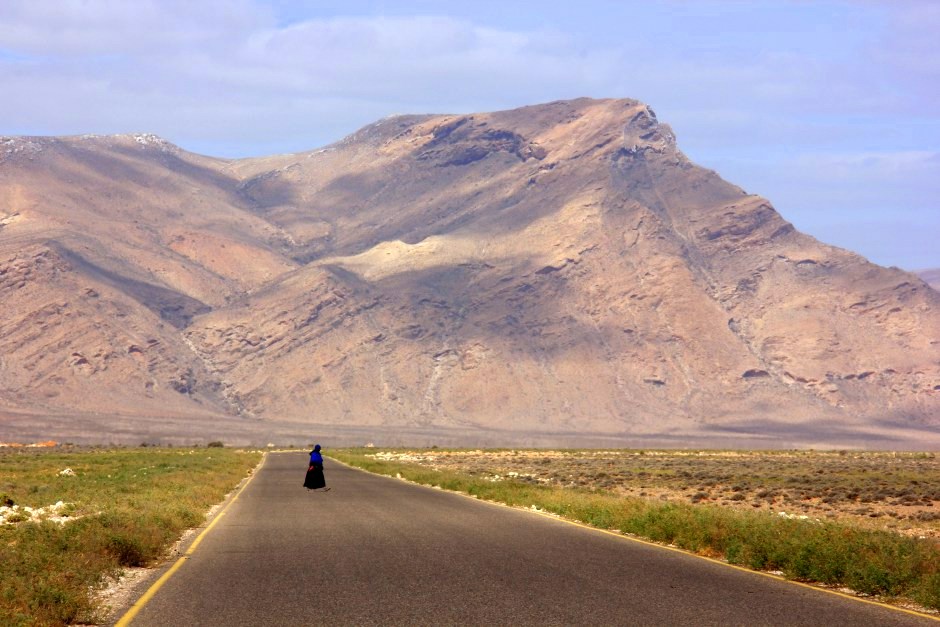 The inquisitive, gallant male who had witnessed my ungainly fall at Wadi Dirhur, had been a sensitive, shaggy goat of grey and white colour. He along with the rest of his herd had spied upon me as I had frolicked among the pool and plants of the lonesome canyon and upon my terrible landing, had boldly come up to comfort me. Although very much an animal lover, I had never kind of considered goats as awesome pets and that afternoon, he had changed my notion for good. As I had rested on a boulder to inspect my bruises, my courageous “Alpha Male” had come right upto me, put his hoof on my knee and blatantly demanded cuddling. It is next to impossible to resist a cute guy (and an “Alpha Male”, that too) who demands cuddles and so, he had spent the better half of that day tucked away on my knee, getting his ears scratched.

He had not been alone in his demands for some loving and as the shaggy team had queued up for some ear tickles, I had realized that the wadi had been a popular grazing ground for shepherds from the nearby Bedouin villages. It had also been a well known picnic spot for local and visiting expat Socotrans and upon further exploration, we had found hooves, horns and discarded goat skins scattered all over the wadi. Picnic is a very popular activity among the islanders and they usually include barbecuing freshly slaughtered goat meat, rice pulao (rice dish speckled with dry fruits and spices), umpteen cups of tea and gossip. Socotrans love gossiping and they huddle for juicy conversations at tea shops, at dinners/lunches at someone’s house, in the middle of the road and on carpeted date palm groves in the island’s hidden wadis. They picnic in big groups, carry sumptuous lunch baskets (and personal chefs) and buy the festive meat from the small Bedouin villages. That had been the reason why I had spotted the maximum number of nomadic settlements near the picturesque tourist spots and most herders had always been found ambling close to the main road. Now, as per Socotran standards, maximum number of settlements usually mean 4-5 houses/ families, maybe a couple living in caves and at least 2-3 dozen goats and cows.

The island’s biggest attraction had been it’s isolation and at times, I had been tempted to pinch myself into believing that such a place had still existed on earth in 2015. That Wadi Dirhur day, we had been the only humans at the canyon and my little friend had remained safe with me throughout the night. Anwar had cooked lunch on a portable stove and it had been a proper camping trip meal. Conjured up from stuff stored in cans and bottles, it had been a sorry meal of pasta with potatoes and tomato sauce, shredded tuna, cinnamon tea and oranges. Food had been a major disappointment and Socotra is definitely not for those looking for materialistic comfort. Secluded, remote and stunningly beautiful, it is as basic as it can get and best for those looking for either adventure and/or pristine natural sojourn. Post our measly lunch, my Wadi Dirhur afternoon had been utter bliss. Peaceful, quiet and very tranquil, I had lazed on a folding mattress catnapping under scrubby, thorny trees and flapping off the big, yellow Egyptian vultures from stealing our food.

It had been my 1st Socotra day in the open and the beginning of a week long journey with Anwar. While sharing a secluded wadi with a strange male guide at night had definitely given me some serious initial concern, the impending dusk had made getting out from the unlit canyon seem more dangerous. Thus had begun my 1st apprehensive Socotran night in an isolated canyon under brilliant starlight and with a faithful bleating companion. Although, I had undeniably been more than a little worried that night, I am happy to say that Anwar had been worth his weight in gold. A serious guide and an excellent driver, he had been safe, responsible and reliable. He had also given the term “roughing it out” a whole new meaning and from that day onward, I had been dedicated duties of a water bearer, part time cook, helper and CD changer in a very military manner. All that however had been furthest from my mind, as I had cuddled my bleating buddy close to me and had pleasantly dozed off. It had been very beautiful too and in the cool shade the desert roses had dropped pink blossoms all around us. The late afternoon sun had glowed a dull gold and in the shimmery haze, the blood dragon tree topped canyon ridges had seemed too high. Sky had felt caught in between the bordering rocky gap of the wadi and the green brook had gurgled silently.

The evening had been a placid one, devoid of any gorgeous colours and dusk had fallen fast at the canyon. Soon returning shepherds’ lanterns had marked tiny spots of illumination among the date palm crevices and bleating crowd had risen dust in the silent wadi air. My “familiar” foreign presence had stopped both the herders and their inquisitive teams in their tracks and they had gawked at me, as I had scurried on to finish my duties. There had been a whole of work to do before the dusk had settled in comfortably and Anwar and I had alternated between gathering firewood, collecting water for cooking and setting up a fire. Stars had popped out fast by the time we had finished our chores and soon the pitch dark canyon had felt repressed under their glittering crowd. Dinner had been another quick forgettable meal and sleeping arrangements had been mattresses spread out under the entire Milky Way. Silence had descended upon the hidden wadi like heavy sleep and strangely, the entire canyon had seemed to be devoid of any nocturnal creature. No buzzing of crickets, flapping wings of bats or hooting calls of owls had broken the dark silence and the only audible noise, had been of our own breathing.

It had been most liberating and my 1st Socotra night in the wild had presented me with one of the most precious gifts of our century. Sleep had arrived like an adrenaline rush and I had dozed off like a sated baby among the canyon, stars and streams of Socotra.

Apart from the trees

That day it had been

I had loved it’s every bit

And I had been

It had been a perfect break