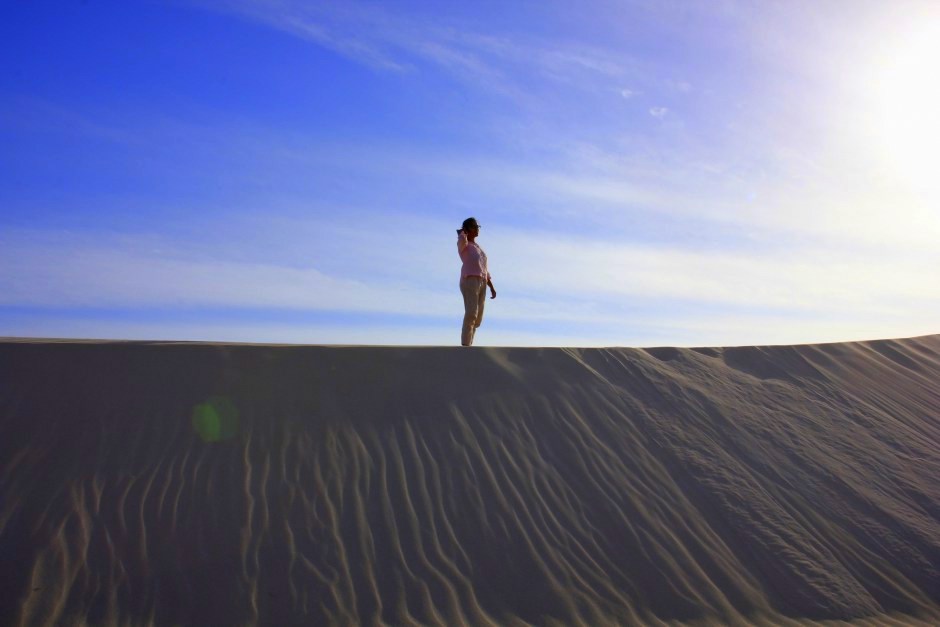 By the time we had reached Omak, a very violet sky had deepened into luxuriant purple and gold. The sun had set most spectacularly and a massive perfect golden disc had disappeared behind the horizon of tapering single highway. The rocky arid landscape had drowned in blood red colours and home coming villagers and their animals had kicked up clouds of chaotic orange dust. Omak Beach had been a bit of a drive from Zahak and it had been late twilight, when our tired 4 * 4 had crunched to a stop on it’s powdery soft sand. After being on the road for 2 rough days, I had been dying for a shower and toilet facilities. Socotra, owing to it’s untouched nature, had provided none such comforts and in the dusky evening light the bordering date plantations had provided me with privacy required for such needs.

It had felt awesome to enjoy that privacy and for the 1st time in 2 days, I had been able to use the natural toilet without a bunch of inquisitive goat eyes staring at me unblinkingly. We had camped right on the beach and after a quick dinner, had dragged our mattresses out from the car. It had been a beautiful clear night and a velvety inky blue sky had been crowded with stars. Thankfully not a single dot of artificial light could be spotted for miles and the diamond bright stars had twinkled with clear hard glitter. The sea which had rumbled just a few feet away had been pleasantly mild and only a sweet, rushing sound of it’s waves had reached our ears. The constant sea breeze had felt chilly at night and I had slept at the foot of a big sand dune to escape the cold. The decision had turned out to be a bad one and in the morning, I had to be nearly excavated from underneath a mound of sand.

The Omak dawn had broken with a rosy blush and I had woken up to Anwar staring down at me in serious contemplation. Sand had covered my body like a neat blanket and a few pesky intrusive grains sitting on my eyelashes, had stung bad. The sand coating on my lips had crunched on my teeth and I had waited, unmoved till Anwar had dug me out. Needless to say, it had not been my most blissful morning but the beauty of the sunrise had washed away all the wear and tear. I had looked straight up and breathed in lungful of  fresh blue sky.  The sand dune which had nearly shifted on top of me at night, had looked like a pile of dazzling sugar and white feathery clouds had fanned behind it. Severely sandy, rested and overwhelmed by beauty, I had rushed to the sea immediately upon getting unearthed and had happily savoured the experience of the breathtaking sun rise all alone.

It is not everyday or at every place that you get to enjoy a stunning sun rise on a magical stretch of white beach all alone and for those brief moments I had happily basked in “marooned on a deserted island” feeling. Not a single human, apart from me, had been visible either on the beach or on the sea and Anwar too had driven over to the nearest village to get fresh food. The young sun had risen slowly painting the sky in changing pearly shades and from faint silver to champagne gold, peach, pink, violet and blue, it had been a most beautiful transformation. The sea too had mirrored the sky colours and both had become one huge sheet of  restlessly changing molten shades. Anwar, as if on cue, had arrived just after the most breathtaking sun rise moments had passed and he had brought along with him a treasure trove of fresh food. With 2 back to back days of Nutella, honey, cheese, super sweet jam and dry bread for breakfast, I had looked forward to change and that morning we had feasted on a small bucket of milk, some fresh bread and sweating chunk of cheese.

For a person, who is in love with food, Socotra had been a hard experience and I had nearly wept in joy at the sight of the loot. Apart from the sunrise, Omak had been a bland experience and the beach had not been particularly very spectacular. The sea had been a bit too cold for swimming and the sand had been strewn with some trash. Thatched huts had lined the edge of the beach and beyond them, enclosed date palm plantations had stretched till the road. Omak’s biggest attractions in my eyes had been it’s shells and I had found some most beautiful ones scattered on the beach like strewn jewels. Big, intact, ridged and with iridescent colours, they had come in beautiful shapes and varieties. Large conchs also had laid embedded here and there and I had been severely tempted to get one for my mother. A big lover of all naturally pretty things, my mother, during my travels as a child, had regaled me with stories of how she could hear 7 seas with conch pressed to her ear. I had always believed her, until the day I had grown up to realize that her mermaids and fish fairies do not exist in our real world.

The conchs of Omak, however, had been so enticingly magical, that I had actually held a large one to my ear with the hope of  hearing the sound of distant seas. The big, white conch, of course, apart from pouring some more sand into my ear, had not produced any aural effect, but the sun rays playing on it’s smooth pearly sheen had been looked fairy tale like pretty. It had somehow brought back some very beautiful childhood memories with my mother and I had secretly ached for her a lot. In our grown up world of responsibilities and busy schedules, we often skip making our loved ones, especially parents, feel special and even forget “missing” them. That beautiful morning, I had craved for my mom like no one else on earth and had secretly vowed to bring her there. With sun climbing higher, Omak’s fresh dewy beauty had faded off quickly leaving a blazing hot beach where fishermen had been busily catching crabs. I had soon gotten bored with the whole scene  and after shopping for a glistening pair of lobsters  had started our long drive to Qalanciya.

But the fierce wind

Had made me want to

Get out of there fast

Shortly and we had

Camped there for the night

I had found Omak

To be reasonably nice

it had been pretty unspectacular

So after a bit of beach walk

I had rared to head

Towards the other side of Socotra