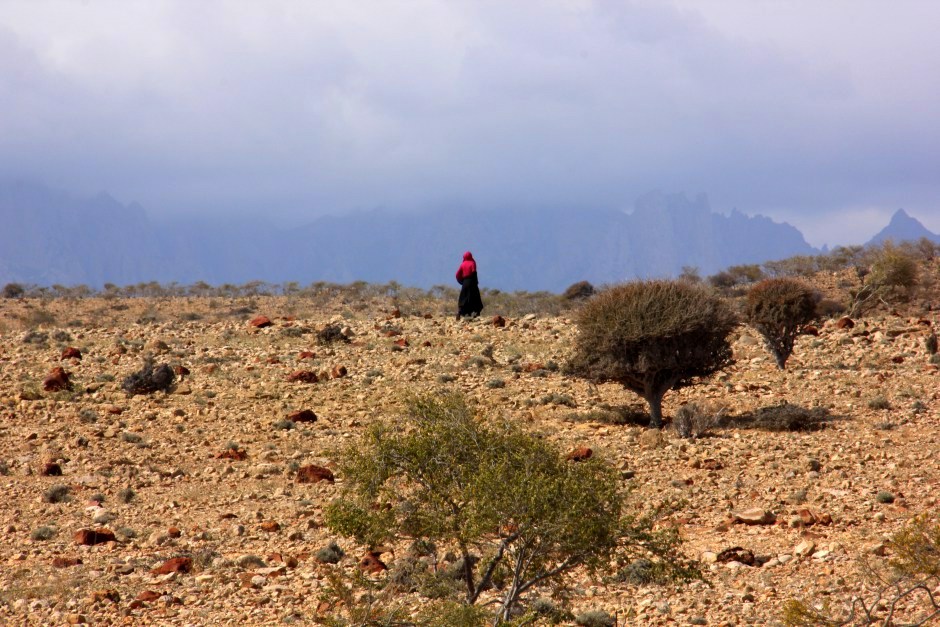 I had left Qalanciya with a heavy heart and had headed towards Hadibo again. Homhil, Di Hamri, Arhar etc had been yet unexplored and I had missed out on the spotlessly white Shoab Beach. Accessibly only by a short boat ride, Shoab Beach is famous for dazzling white sand, azure blue water and ring of cucumber trees which grow along it’s sea facing cliffs. Only 2-3 fishermen live on that beach and a jutting headland makes driving/walking over to it nearly impossible. The water around Shoab is supposedly teeming with marine life and loggerhead turtles and playful dolphins fearlessly come close to the swimmers.

As tempting as these had sounded, for a solo traveler, a return boat trip to Shoab had been around 200 USD and unfortunately, at that time, being the only tourist in Qalanciya, I had no one to share that cost with. Thus I had spent my last Qalanciya day with my friends and the evening especially had been pretty eventful. By stroke of good luck, it had been Abdullah’s eldest daughter’s engagement ceremony and we had been invited over to his house to join the celebrations

I had got along very well with Abdullah’s wife and their  brood, and his eldest daughter had been my favourite. Her name had been Jamila and she had been a bright eyed, friendly girl of 17 who had hated studies and loved fashion. We had spent a few evenings together, where I had helped her understand “Hind/Indian” and had once wrapped a length of cloth around her like a sari. So while not totally unexpected, the invitation had been most touching and I had spent the day with the family, participating in all the auspicious rituals. The celebratory customs had been vaguely familiar and for once, it had seemed like a scene straight out of the Indian subcontinent. The hard working Socotran ladies in the privacy of gender segregation had let their hair down and given into a day full of merriment. They had enjoyed henna painting, singing, dancing and making horrendously lewd jokes and more than once, I have had to render fullthroated renditions of popular Bollywood songs accompanied by dance steps.

It had not been easy to dance gracefully with hands and feet painted with gobs of wet henna and taking advantage of my tourist status, I had soon escaped to the other room where the men had peacefully smoked, gossiped, feasted and discussed Yemen’ political situation and fishing woes. The festivities had heightened post sunset and had continued the entire night, but I had bade them goodbye after the communal dinner. A wedding is a matter of great joy in the island and Abdullah had certainly pushed the envelope for Jamila’s functions. The food spread had been an orgasmic feast of pomegranate rice, red beans, fish, roast chicken, goat meat with an assortment of fresh seafood platter and the guests had gorged on them the whole day. Waking up early the next morning after such a heavy and late dinner, had been tough and I had dozed off nearly all the way to Hadibo. In that silvery morning light, a quietly smoking Anwar had driven in peace and he had picked and dropped his fellow islander enroute.

Transportation had been a major problem in Socotra and the residents had to wait for hours by the highway to travel even to the next village. Hitchhikers had dotted the Socotri road, just like it’s other omnipresent sights and we had always helped them as long we had space. A grey, moody day had welcomed me to Hadibo where familiar sights, sounds and chaos had once again choked my senses. A fine rain had thankfully smothered the rising dust and the looming Hagghar mountains had looked nearly indigo in the blanketing mists. The heavy, rain pregnant clouds had bore down on the tiny city and after a quick breakfast, we had sped towards Moumi Plateau. I had re experienced the familiar relieving feeling immediately upon leaving Hadibo and the widespread sunshine in the open areas beyond the capital city had been a welcome sight. The weather moodiness had been a typical Socotra feature and the rugged topography had given rise to the unique constant play of sun and shade.

Anwar, who had drooped into complete fatigued silence at Hadibo, too had brightened up and once again my gift of Bollywood music CD had blasted through the Socotra air. We had plans to visit Moumi Plateau that day, with a possibility of camping there overnight and the next morning had Arher Beach on our schedule. Located on the eastern part of Socotra, Moumi had been a vast rocky limestone area with inter hill-plains covered with lots of endemic and rare plants. Only a few ancient shepherd villages had pockmarked those open spaces and there had been a few incredibly beautiful lagoons. Keriya had been one of them and because of the dry season, only a thin stream had meandered between the deep red canyons. The brook had sparkled bright silver in the sunshine and at a gap it had flattened out into a shallow sheet of water. The stone villages and date plantations had bordered the water body and the deep blue sea had dashed in the distance. For such a small island, Socotra had been packed with natural attractions and the eastern part had certainly been one of its prettiest areas.

Di Hamri Protected Marine Area had been on the way and we had stopped there for some lunch and snorkeling. The marine park had been teeming with fishes and the coral reefs had been unbroken and spectacular. A whole crowded colourful world had existed underneath it’s glassy water and the warm sun had made the experience even more pleasurable. I had loved splashing about with Nemo and his friends, but Moumi had beckoned me to move ahead. Thus I had unwillingly left Di Hamri in a rush and the result had been drying my wet clothes on me during the rest of the drive. The air had gotten considerably colder as we had wound in and out of the hills and plains and by the time Moumi had arrived, I had run a slight temperature.

Moumi had been very pretty and large tracts of flowering bottle trees had been the 1st sight which had met my eyes. A sea of pink flowers had run along a small gorge and a green stream had gushed past wild date trees. It had been vaguely familiar with Wadi Dirhur with the exception of a small multi tiered waterfall which had tumbled into a green rock pool. The Wadi had run deeper into the folds of the canyon and the steep red rocky slopes had been covered with profusely flowering trees. Homhil Protected Area had not been too far and the frankincense, myrrh and dragon blood trees had made their presence felt. Known and popular for it’s rich bio diverse flora, Homhil had not allowed any overnight camping and I had initially made plans to hike over there to check out it’s beautiful reptiles. Apart from the unique tree population, Homhil had been home to many special flowering bushes and a whole range of endemic fauna.

Spotting the chameleon (Chamaeleo Monachus), the carnivorous beetles, strange land snails, the bright red freshwater crab (Socotrapotamon socotrensis) etc had been on my Homhil list, but the fast rising temperature had made me drop the idea. Soon along with the fever, my ears had started aching, I had made a very worried Anwar rush back to Hadibo for medical attention. By the time we had reached the town, Hadibo had been drowning in rain and apart from popping a few Egyptian medicines (with Arabic written instructions on chemicals, date of expiry etc), prescribed by the local pharmacist, I had no option of any medical help. Anwar had bought me a hot plate of food, sat silently as I had pushed a few forkful in my mouth, handed me the prescribed pills and had tucked me at Socotra Taj Hotel. He had left for the night soon, with a promise to check up on me at the earliest and I had cried into the thundering Socotra night in pain. Nothing had felt worse than falling sick in a foreign country and in spite of being a paradise island, Socotra had been the last place I would have ever had liked to get ill.

Hadibo had arrived with silvery rain

And beyond the city

Sun had shone on

The ancient hills and plains

It had been glorious day

With a beautiful play

Of sun and shade

And a lot of wilderness

Had made the drive

And we had paused there

Amidst a burst of beauty

Had been in full bloom

A deep canyon had

Into an ancient space

But a sudden discomfort

Leave all the beauty

And rush back to Hadibo