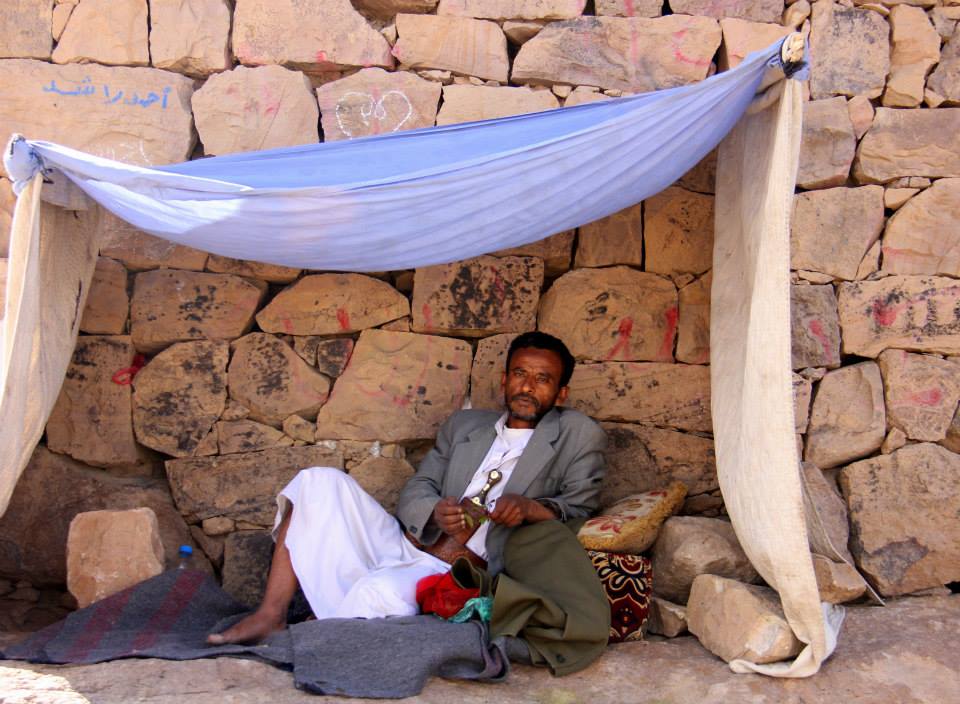 Magical carpets and Jews of Yemen

I had stumbled upon Bayt Bows by chance and it had been one of the my most intriguing journeys into history. Mohammed, my guide had explained Bayt Bows’ literal translation as “kissing houses” and although, it had been quite a titillating title, Bayt Bows history had been more fascinating. For a starter, it had been hard to imagine an orthodox Islamic nation to have a prominent Jewish history and along with that, the combination of a mass exodus, which could be best described as sensationally dramatic, had been absolutely mind blowing. According to history, Jews had flourished in Yemen since 10th century BC and the community had come into existence when the famous queen of Sheba, the beautiful and wise Bilquis had paid King Solomon a visit in Jerusalem. They had had a son by the name of Menelik and after the destruction of King Solomon’s temple, many Jews had followed the Queen back to her country. Yemeni Jews had always proudly proclaimed themselves as descendant of the real Jews, arguing that their ancestry had dated back from the Torah (Jewish Scriptures) where both the ancient cities of Sanaa and Sa’ada had been mentioned by their old names.

Although, their claim had never been authenticated, Yemeni history had never been able to separate the 2 and for centuries, the communities had lived, worked and prospered in peace. Yemeni Jews had been very famous as skilled craftsmen and silversmith and their services had been in much demand throughout the country. Even today many places in Yemen, including the historic houses of old Sanaa, proudly bear the Jewish star stained glass patterns on the decorative qamariyas (windows) and many Yemeni archaeological sites clearly display remnants of overlapping of world’s 2 warring religions. Modern Yemeni history had been generous to the coexistence and until 1948, Yemen had been the proud home to 55,000 Jews. Another staggering 8,000 Jews had lived in the British colony of Aden, when the daring late 1940’s “Operation Magical Carpet”  had changed everything for good

“Operation Magical Carpet” had been an astounding historical feat and in a series of secret operations which had taken place between June 1949-September 1950, nearly 380 flights by British and American transport planes had successfully airlifted as many as 50,000 Jews to Israel. The mass exodus had been one of the best kept secrets of that time and it had not been made public even after several months of its completion. Although, severely criticized by many, the highly successful “Operation Magical Carpet” had changed Yemen’s culturescape forever and it had left behind a string of empty shells of heritage scattered across the country. Bayt Bows had been one such empty shell of a heritage village and it had happened to me on a politically stormy Yemeni day.

Sanaa had been in utter chaos that morning and people all over the city had angrily protested against an acid attack on a honest, government official. The attack had supposedly been sponsored by his corrupt colleagues and Sanaa had erupted in volcanic pent up rage. A rain splashed previous night had made matters worse and the city’s main thoroughfare had turned into a water duct. Cars, buses and all kinds of vehicular traffic had been cordoned off to let the rain water run clean into a storage area and frayed tempers had risen above cantankerous horns. Tension had been nearly tangible that day and even the clear rain washed blue sky had spelled doom. People, who had been walking on a political tightrope for a long time, had burst out in frustration and enraged political protesters had angrily run amok on the city streets. Armed with angry placards and loud chants, they had presented a formidable picture and needless to say, it had been a very scary start of the day.

Mohammed and I had already been on our way to the outskirts of Sanaa, when the tensed situation had made us change our plan. The tension had made me a bit jittery too and I had watched in nervous silence as Mohammed had skillfully extradited the car from the chaos. We had sped from the scene before it had turned violent and had rushed uphill, past posh new Sanaa villas, to escape the angry protests. He had driven non stop, until our car had screeched to a stop and being shaken by sudden turn of events, I had taken some time to absorb the difference. Far from angry Sanaa, it had seemed like another world up there and from our height, the city had seemed to be simmering in discontent. Harsh late morning sun had made the pollution settle on Sanaa like a shroud and haze had risen from it like wisps of smoke. The familiarly comforting lyrical muezzin’s calls had been non existent too and a strange silence had pervaded the place.

It had seemed to me as if we had fallen into Alice in Wonderland’s magic tunnel and apart from the usual litter, the landscape had been devoid of any signs of life. Thorny flowering cactus shrubs had dotted the brown stony hills and across a shallow chasm, crumbling fortifications had circled on olive green rock face. It had been an awe inspiring sight and the entire composition of the ancient tawny structure perched atop a vivid green mountain, against the backdrop of a stretched blue sky, had been extremely beautiful. Although my trips to Kawkaban and other places had made me a bit immune to Yemen’s beauty, I had never gotten used to the country’s spectacular rock formations. They had come in various interesting shapes and colours and from spindly, top heavy, gnarled and bulbous, Yemeni mountains had been truly magnificent. The most fascinating part of the landscape had been the way, ancient Yemenis had integrated architecture into the mountains and Bayt Bows had presented more than that.

One of the 4 villages which had topped a rocky ring in the southern outskirts of Sanaa, Bayt Bows had been an eye opening example of Yemen’s harmonious communal past. The village had once housed both the Jews and the Muslims and they had co existed in peace as a secular united community. While the Muslim dwellers had resided within the walls of the main village, the Jewish community had settled outside it and both the communities had shared responsibilities of co habitation equally. According to a popular legend, this peaceful co habitation had been introduced by one Sheikh Ali Mohsen al-Hawlani, an ancestor of a Bayt Bows family. At that time, a neighbouring  village had often complained of  the Bayt Bows Jewish community pastoral animals to be illegally grazing on their lands, thus damaging their crops. In order to avoid a full blown tribal conflict, Sheikh al-Hawlani had always settled the issue by offering compensation in cash or kind. That had been more than 200 years ago when money had been a rare commodity and the Jewish villagers had to struggle to arrange in the amount.

The crafty Sheikh, had taken advantage of the situation and cemented communal brotherhood by asking both the communities to donate for the cause, with an understanding that the offer had to be reciprocated. Thus Bayt Bows had united and the entire village had always stood by each other for centuries until the mass exodus of 1949-50 had nearly emptied it out. The drying up of their water source, the Kamaram Dam had put the final nail in Bayt Bows coffin and presently only an empty, crumbling shell had remained atop the green stony ridge. I had found the old Jewish village to be hauntingly desolate and apart from a small group of smiling children, only tawny resident cats had roamed free. Most buildings had been in dangerous state of disrepair and structural skeletons had loomed ominously. Piles of rubble had given way to flowering cactus bushes and light had streamed in eerily through abandoned wooden beams. Here and there, remnants of Yemen’s Jewish past had stood defiantly intact and I had been uncomfortably aware of my intrusion at neglected people’s homes.

In spite of the time gap, everything had seemed alive and the well organized village had seemed abandoned in a hurry. Kitchens, souks, granaries, living quarters, cemetery and even a synagogue had stood in neat crumbling blocks and stone pathways had faintly resembled the marked streets, they had once been. In spite of its neglect, shadowy ghosts of the old village had lurked underneath the desolation and it had not been too hard to imagine Bayt Bows in its full glory. A small mosque had stood in the middle of the square and after the abandonment, it had catered to the Haima tribal people who had made Bayt Bows, their home. I had liked Bayt Bows very much and leaving it’s cocoon like quiet to return to chaotic Sanaa had been hard. While, my 1st love in Yemen will always be Sanaa, that day, the strangely alive ghost town of Bayt Bows had been the perfect oasis of tranquility. Needless to say, it had been the most haunting peep into history and a walk to remember.

To learn more about the Yemeni Jews and their art, check out http://www.lemonicks.com/Travel/2015/02/13/yemenite-art-in-israel/

Had happened by chance

And the neat village

Had looked as if

It had been abandoned

Its past had seemed more

And with its roots dating

Back to Queen of Sheba

It had not been hard

When evening had dawned

For the first time