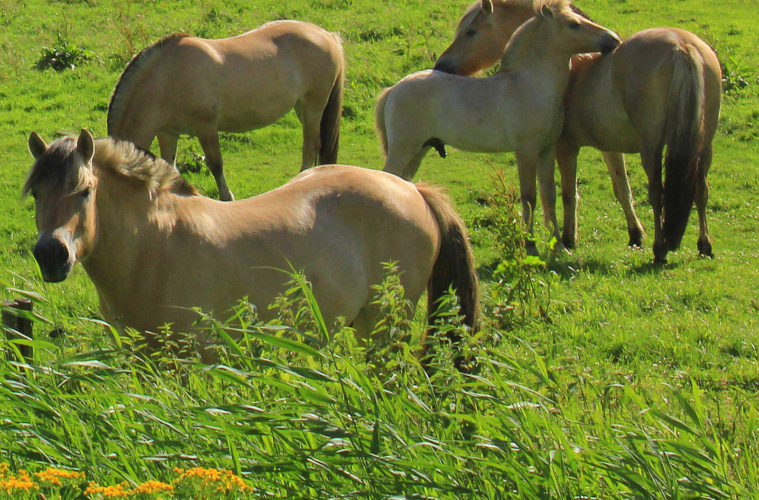 Ever wondered how some of the most outstanding monuments of their time simply slip through the hands of time? Often when I visit such a site, I wonder how its creators would feel seeing its present state of mortality and if the contemporaries of that time would have ever believed its fall from prominence. Fort Bourtange of Holland is one such fateful site and I did not quite believe Tarek, when he told me that we were going to visit a star-shaped fort on the weekend. Even when we reached Fort Bourtange, I found it difficult to comprehend Fort Bourtange’s claim to fame, but then I come from India, a country scattered with gorgeous monuments at nearly every step.

Located in the north of Holland, near the German border, Fort Bourtange is a beautiful drive from our home city of Cologne and it makes a perfect summer day trip. I was full of anticipation of this unique star-shaped fort and had visions of a magnificent architectural wonder. The reality was a bit different from my Indian monument inspired dreams and Fort Bourtange turned out to be a unique, living settlement. Originally built by William I of Orange from 1580 to 1593, in the midst of the Eighty Years’ War to control the road between Groningen and Germany, Fort Bourtange is one of Holland’s best-preserved fortifications.

You may also like: Five fun things to do in Amsterdam

One of the corners of the star-shaped Fort Bourtange.

A moat that gave Groningen its independence

With its water-filled moats, picturesque windmills, solid preserved defences and quaint houses protected from all sides, Fort Bourtange took us back in time when rogue foreign armies came plundering and villagers sought refuge behind the thick walls for protection. Those were the times when the Spaniards had taken control of Groningen in 1577 due to the decision of Count George de Lalaing, the governor of Friesland, Groningen and Drenthe, to support Spain rather than the United Provinces in their fight for independence. The purpose of the fort was to cut off supplies for the Spanish forces posted in Groningen and the plan worked since the city was re-captured in 1594.

Recommended for You: Cologne Diaries

The star-shaped fort went down into history as unbreachable.

The architectural genius of the pentagon-shaped Fort Bourtange

With the upheavals in history, Fort Bourtange’s fortifications lengthened and it got extended to its full capacity in 1742. Roughly resembling the shape of a star, Fort Bourtange had many triangular bastions, wide ditch and defensive walls which were made lower and thicker in order to counteract the cannon balls. They were protected by gently sloping banks in front of ditches so that the walls were almost completely hidden from horizontal artillery fire. At that period of time, Fort Bourtange was considered an architectural genius and it was a military success for years until agricultural practices dried up the fort’s protective swamp. Following the decline, Bourtange evolved into a residential town by 1851 and life continued to flourish there for the next 100 years. In the 1950s and 60s, however, when job stagnation threatened the existence of Bourtange, the local government came to rescue and declared it as an open-air historical area.

The unique shape of Fort Bourtange as seen from the sky

From a military outpost to a tourist village

Fort Bourtange became a tourist destination and it became popular among day trippers from Groningen. Today it has about 1000 inhabitants, one of the largest citadels in the Low Countries and charming cobbled streets. To be brutally honest, though it has none of the grandeur and awe-inspiring spread of an Indian monument, Fort Bourtange was a day well spent in offbeat Holland. Two gates and three drawbridges over the picturesque lily covered moats took us to the old town and we walked into the quaint Marktplein, the main square. Dutch food stalls and souvenir shops lined the square and streets lead off in all directions of the pentagram-shaped inner fortification.

Suggested for you: Beautiful stories from Europe

The earthy pleasures of a Northern Holland trip

It took us around two hours to explore Fort Bourtange to the fullest and the sun was still shining brightly when we made our way towards the student city of Groningen. Though not culturally endowed as France or spectacularly beautiful like Germany, Holland leaves a very pleasant aftertaste from a trip and I love its simple earthiness. There is a solidity about this industrious manmade country and our next destination of Groningen was as enjoyable as the rest of the Dutch weekend trip.

Somewhere on the way to Fort Bourtange from Cologne in Germany

How to reach Fort Bourtange

Located right on the German border, Fort Bourtange is a few hundred metres from Germany along the German A31 motorway (take exit 17). It is easier to reach there by car. To use public transport, get on a train from Groningen to Winschoten (35min), then board the bus No 12 to Vlagtwedde. Make sure to change again to bus No 72 for Fort Bourtange.

Fort Bourtange has several historical houses which have been converted into bed and breakfasts.

There was this adorable baby too

Things to Do in Fort Bourtange

Time travelling is possible at Fort Bourtange. Its medieval architecture, docents in period costume, canals and dykes make it a relaxing destination. The village has four museums, several restaurants, historical shops and a hotel in the former soldier barracks. The museum of Terra Mora houses the main exhibit, with a section dedicated to the area’s natural history. You can get a chance to engage in simulated cannon volleys there. The Captain’s Lodge focuses on the life and times of the militia stationed at Bourtange in the 17th and 18th centuries, while De Baracquen has displays of artefacts and curios uncovered during the fort’s reconstruction. The town’s synagogue, built in 1842, explains the life and times of its Jewish citizens and includes a plaque with the names of 42 locals who were take away to their deaths by the Nazis. Fort Bourtange also organizes events like battle reenactments and open-air crafts markets. Check their website for dates, and time your visit to coincide.