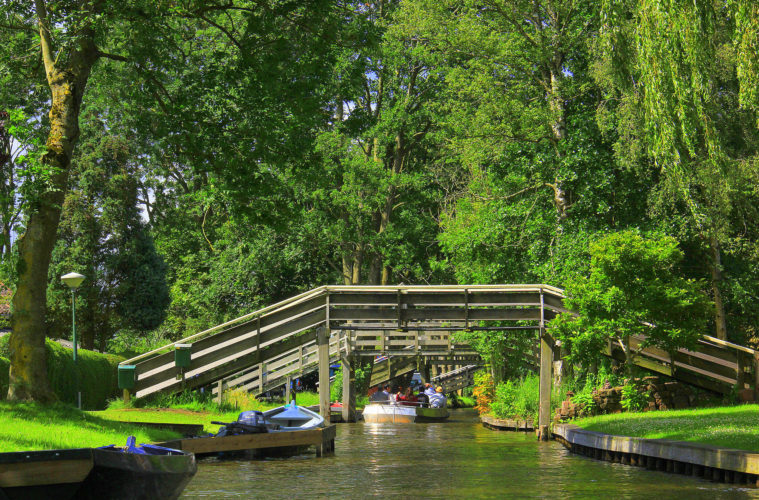 Giethoorn, the picturesque Dutch village with no roads

Giethoorn markets itself as the ‘Venice of Holland’. Now, that in my eyes is a bit far-fetched, though the Dutch village is indeed very pretty. Its sole similarity with Venice is that tourists overcrowd the village in summer and Giethoorn gets overrun by busloads of day trippers. They trample over the Dutch destination with no streets with selfie sticks, big cameras, and rental bikes and contrary to the popular photos on the internet, you feel like running away from it. That was exactly how we felt when Tarek and I saw straight lane leading to Giethoorn be lined with slow-moving gigantic group tour buses. The parking lot was spilling over and we drove away from the village to find a spot in the shade.

Giethoorn calls itself a flower-filled Dutch village with no roads.

It was in the month of July in 2017 and we wanted to explore the famous Dutch village with no roads over the weekend. So we clubbed it together with a fleeting visit to the star-shaped Fort Bourtagne and Groningen and our Dutch weekend was happily full. German and Dutch roads are simply perfect for summer drives and that area is lush and green. Borders of old stately trees throw zigzag shadows on the village roads and meadows sprawl on both sides. Dandelions cover the fields like millions of dancing sun and wild-haired tawny horses sprint through them. Now, imagine, the shock of leaving this tranquillity for a jam-packed place and the picturesque famous canals of Giethoorn had major traffic congestion of boats. All kinds of boats and rafts bobbed in a queue and their wooden hulls thumped against each other.
You may also like: Trailing tulips in Holland

Once a peat bog, Giethoorn is now a popular summer day trip destination.

Giethoorn is all about thatched houses, flowers everywhere, and canals

Now, when you have a village built on water, you will need a boat to go everywhere and every pretty flower-decked house in Giethoorn had at least two of them. They were parked at the entrance as one usually finds a car park and boats and flowers seemed to be the staple of Giethoorn. Big bunches of hydrangea, geraniums, and roses sprang out riotously from flower boxes and hedges and old willow trees bent down on the rippling canals. Here and there wooden bridges spanned over them and sometimes, despite the crowd, Giethoorn looked breathtakingly pretty.

Suggested Read: Five fun things to do in Amsterdam

Winding down the idyllic canals of Giethoorn is a charming experience.

Giethoorn is the brainchild of incredibly industrious settlers

Giethoorn’s claim to fame is of a village with no roads and in reality, it is built on water crossed by a few bits of land. In olden times farmers used to transport their cows around in rowboats filled with hay and everything in Giethoorn moves on water. That is not the only unique thing about Giethoorn and its origins in comparison to other places in Europe, are also quite odd. Until the 13th century, Giethoorn was nothing but a marshy, infertile clunk of land which nobody paid any attention to. Later during that century, a local landowner supposedly gifted it to an obscure religious sect and the new settlers turned out to an industrious lot. They eked out a living from the local peat deposits and stumbled upon their digging, hundreds of goat horns. These were believed to have belonged to the animals who were victims of the great St Elizabeth’s Day flood of 1170 and they named their little settlement Geytenhoren or Goat’s Horns.

For a place which gots its name from goat horns,

Giethoorn now and the quaint village it used to be

Over the years the name evolved into Giethoorn and the village seemed to suit its creators. They went about making it more livable, dug canals to transport the peat and when the diggings flooded, Giethoorn had the watery network which is now its biggest tourist attraction. Today, Giethoorn hardly bears any resemblance to its grimy past and the Dutch village is extraordinarily picturesque. Its ribbon-like blue-green waterways are overlooked by quaint thatched cottages, where the residents play frisbee with their dogs in the sun. Boats glide under old humpbacked footbridges and willows whisper in your ears. The only fly in the ointment is Giethoorn’s immense popularity and I personally suggest you to avoid the centre of the village in the summer, when the place turns into a tour group circus. However, if summer is when you happen to visit Giethoorn, then make sure to head to the northern part of the village, which is quieter, quainter and has a lovely swamp.

Apart from the waterways, Giethoorn is just like any other village.

Located in the province of Overijssel in the east of the Netherlands, Giethoorn is a green and still area. It is at the centre of Overijssel’s canal system and the little village is so dependent on its waterways, that some of the houses cannot be reached by road. Even the postman of Giethoorn delivers the mail he travels by punt.

How to reach Giethoorn

From Amsterdam take the train to Steenwijk, from there board the bus 249 to Giethoorn. If you’re driving from Amsterdam, take highway A1-E231 to the A28-E232. Driving time is about 90 minutes.

Things to do in Giethoorn

With 90km of canoe trails and scores of motorboats to rent, boating has been a popular tourist attraction here for years. Nowadays, the hire shops stock so-called ‘whisper boats’ – dinghies driven by electric motor and at Giethoorn you will find yourself on the edge of vast series of lakes and canals, ideal for boating, angling and paddle-cycling. Joining a canal cruise is the best way to explore Giethoorn and the myriad of canals are delightfully photogenic. Due to its summer popularity, it is best to book a canal cruise in advance. Alternatively, you can hire a small electric boat that requires little technical skill to operate, and is perfect for a small family or a couple. Bikes are easily available for rent as well and you can cycle around the beautiful Dutch countryside. Giethoorn has three canal-side museums and the Schreur shipyard, where the Giethoorn punt is built. Footpaths beside the canals are ideal for walking or cycling, and there’s a wide selection of waterfront cafes and restaurants.

Rent a boat near the tourist office. There the rate for an electric boat is 15 Euro/hour, canoe for 8 Euro/hour and bikes cost 8 Euro/day.

Where to Stay in Giethoorn

Most people suggest that 1 night in the village is enough to enjoy its beauty. There are several bed and breakfasts available in Giethoorn. Some of them are:

Despite being super touristy, Giethoorn is incredibly pretty and our travel verdict is that if in Amsterdam, take out some time out for a day trip to the Dutch village with no roads. Giethoorn is worth the effort. Don’t believe us. Check out these photos of Giethoorn and decide for yourself.

Giethoorn is a nice day trip from Amsterdam.

It is an immensely popular destination,

And in summer gets overrun by tourists.

Still, it is not difficult to

To find a quiet spot there.

So step away from the crowded core,

Spend a night at one of the cottages,

And enjoy the slow paced

At Giethoorn, the picturesque Dutch village with no roads.