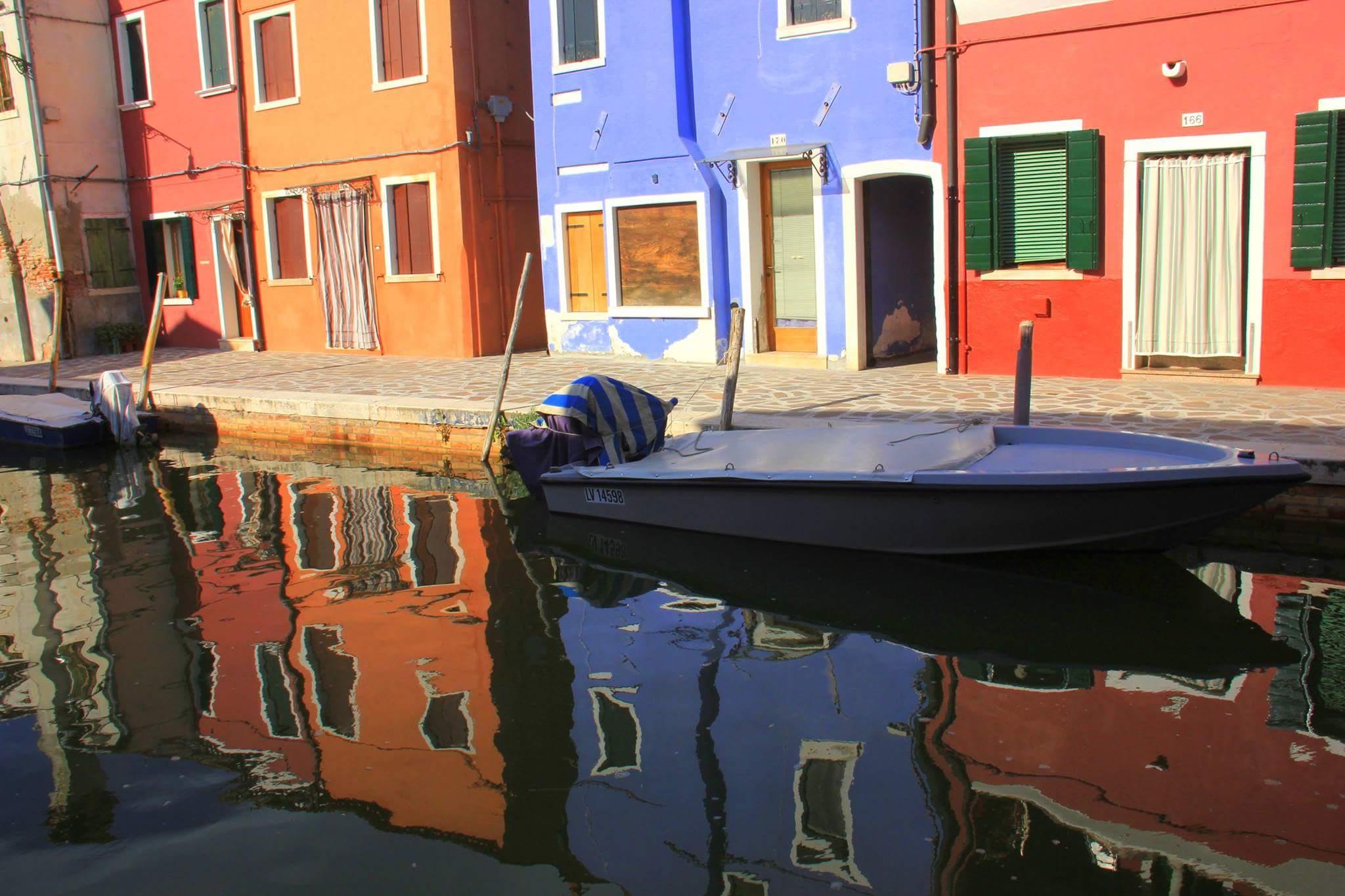 The lace and rainbow houses of Burano island

One of the most beautiful places in the world, Venice has a tendency to overwhelm its visitors. For most people who stay/visit Venice for more than 2 days, its narrow alleys, magnificent marble mansions, grandiose churches and innumerable waterways become stifling. The maddening wave of daily tourists also adds fuel to the fire and Venetian visitors look beyond Venice for some quick breathers. That s why day trips to the outlying island of the Venetian lagoon are so popular among the travelers and they are great value for money if you have a Hello Venezia travel pass. Among all the islands, the trio of Murano, Burano and Torcello are most popular and the Burano island is one of the most photographed places in Italy. A quaint fishing village, Burano island is famous for its cheery pastel-coloured houses and exquisite handmade lace that once were a rage among the European elites. Nowadays, however, much of Burano‘s lace comes from China and the island is overrun with excited visitors seeking out the most colourful spot for their selfies.

Burano island and its lacy number

An island which was probably settled by the Romans, Burano rose into importance in the 16th century when its women began making handmade lace. They painstakingly toiled for many months for this craft and Burano island lace eventually became an important trading item. The history of Burano island lace is a bit unclear and many legends are associated with the origin. The most popular are the story of Nicholas and the sirens. According to the legends, a long time ago, there lived in Burano island a fisherman called Nicholas. Being good natured, handsome and industrious, Nicholas was considered as the most eligible bachelor and all the unwed girls wanted him. But he was deeply faithful to his fiancee Mary and had eyes for her only. So deep was his love for her, that Nicholas did not even give into a group of sea sirens, who came to seduce him with their beguiling beauty during his fishing trip at the sea. Their sweet songs fell on deaf ears and only Mary was on Nicholas‘s mind. The sirens were so touched by the deep love that Nicholas bore for his fiancee that they gifted him an incredibly beautiful embroidery made from the sea foam. Nicholas presented this beautiful object to Mary on their wedding day and skilled Mary immediately set about recreating it with thread. Thus the delicate and magnificent Burano lace was born and till today it remains one of the perfect handicrafts.

It is a colourful fishing island.

The home of the Venetian Lace

The Burano island lace work is extremely exacting and that was its biggest highlight. During the olden days, each woman specialized in a single stitch, and since there used to be seven stitches required to create a finished item, each piece was passed from one woman to another for completion. That is why making handmade Burano lace used to be such a back breaking job and a centerpiece for a tablecloth took more than a month to get completed. This made Burano lace very expensive as well, though today, with some exceptions most of it is machine made. The Burano island lace or the Venetian lace as it is more famously known was punto in aria or “points in the air” because of its delicate effects. This lace is well documented as being one of the most prized possessions of the nobility of Europe and in the 1600s, the wardrobe of Elizabeth I of England included lace made of “Venice sylver” and “Venys gold”. This is a testament to the art of incorporating precious metals into lace patterns for costly fine garments and throughout the Renaissance, Punto in aria was included in women’s dowries as proof of their families‘ wealth. Despite such demand, Burano lace industry died by the end of the 17th century when the French and Flemish lace production centers started booming. By the end of the 18th century, the fresh wake of the French and American Revolutions, made people boycott fashion associated with the reviled aristocracy and with the end of the Republic of Venice, its lace production ended as well. Today, there are very few women knowledgeable in this art and they prefer to work at home, away from the public eye. Though extremely secluded, it is not impossible to explore this beautiful heritage and you can book for a guided tour of Burano island lace with Martina Vidal.

You may also like: Flemish lace trail of Bruges

It has a rich Venetian heritage of Burano lace.

Though, the lacy heritage is an integral part of Venetian history, nearly all visitors throng to Burano island for its rows of cheerfully painted houses. This island is indeed a riot of colors and splashes of vivid blue, yellow, pink, ocher, and dark red can be spotted even from the ferry. Much popular with the artists, the colours of the Burano houses follow a specific system originating from the golden age of its development and permission from the local government is mandatory for someone wishing to paint their home. To get this approval, one must send a request to the government, who responds by making notice of the certain colours permitted for that lot. The tradition of Burano‘s colourful houses goes way back into history. Legend has it that the villagers started painting their homes in luminous colours so that the fishermen could see them even in in thick fog and they could be guided back to shore safely. Today, the Burano island houses pop with bright colors that almost look photoshopped and the homes are repainted every two years. This kaleidoscopic panorama brings much revenue from tourism to the island and the place is overrun with camera toting tourists.

Check this out: How to visit Venice on a budget

The heritage of Burano‘s colour schemed housing goes back into Renaissance period.

The postcard pretty Burano island after the tourists leave

We visited Burano at sunset after a half day trip to Murano. Luckily it turned out to be a brilliant idea as most of the mad rush of day trippers were gone by then. Burano island was still fairly crowded for its size and it was jaw droppingly beautiful. The entire village was a jumble of rainbows and shops selling souvenirs (real and fake), restaurants and cafes lined the glassy canals. There were more tourists than the locals when we arrived and except for an occasional old woman peering over her flower boxes, no villager could be seen going about his daily life. They stepped out, after sunset, with the return of the fishing boats loaded with heavy catches and soon local Burano seemed to stir to life. Tranquility and calmness settled in with sweet peeling of church bells as the elderly ladies embroidered original Burano island lace by their tombolos or lace pillows. They sat in groups in the middle of brightly coloured flower filled courtyards gossiping and working at the same time. With their heads were bent low over their tombolos, the nimble fingers embroidered lacy magic as their young grandchildren darted freely around on their bicycles.

House wives appeared to check the fresh fish being put out by the fishermen from their traditional boats and village elders gossiped under flower boxed balconies. Tired men smoked at their curtained doorways and quietly watched the colourful houses being reflected on the green waters of the channels. My baby Akash loved Burano and he crawled along the rainbow lanes, as soon as they emptied out. He loved the space and the friendliness of the locals after a whole day of being stuck in the baby car and played along happily as his tired mother rested nearby. It felt great to enjoy the twilight hour alone with the community of the famous Burano island and it seemed to me as if they were celebrating the absence of the tourists. They dived into their daily lives with energetic glee and their home island belonged to them once again, until the next day break.

Burano is one of Italy‘s most photographed places.

How to reach Burano Island?

Taking the Vaporetto Line or ACTV water bus number 12 leaving from Venice Fondamente Nove is the most cost effective way of reaching Burano island. The cost of a one-way trip is 7 euros, so you can save a lot of money by investing in a travel card or a 20 euro day pass, which gives you Vaporetto access for 24 hours. The number 12 Vaporetto reaches Burano through Murano and the journey takes around 40 minutes. To reach the Venice Fondamente Nove is a time-consuming affair and can be accessed by only Vaporetto number 1 (stop Ca‘ Doro), number 4.2 and 5.2 (stop Fondamente Nove and change over to line 12 for Burano).  Alternatively, you can take the Vaporetto number 3 which takes the shortest time to reach Murano and then switch over to the “Murano Faro” stop to take the Vaporetto number 12. This way you save a lot of time by avoiding the long Grand Canal and a few stops beyond.

Being a small fishing village, there is not much to do in Burano island except for walking around and soaking up the colourful atmosphere. Food is expensive and not recommended beyond a quick bite, though you must sample “Bussola”, Burano‘s special round cookie. You can combine Burano with either Murano and/Torcello in a day or extend the trip to monastery island of San Francesco del Deserto, leaving Murano and Torcello package for another day. Whatever you do, don’t forget to take a fully charged camera, because Burano island is one of the most colourful places on earth.

You may also like: The Greek pop of colours at Chania

Is famous for its colourful houses.

It is a very popular day trip from Venice.

Because of its popularity,

It can get pretty crowded.

Visit it after the tourists leave

It is the best time

Check out these fabulous posts on Burano island by other bloggers – Ohh Couture, Happy to Wander, Nina-Travels, Gobeyonds