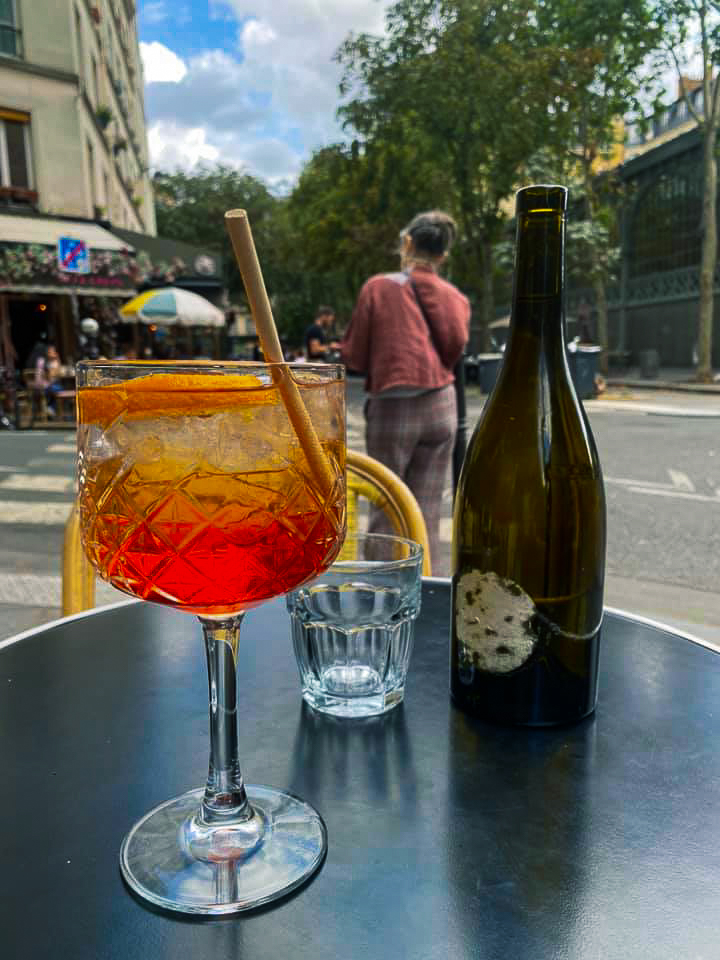 Paris Café culture is as quintessential to the city as its wide boulevards, iconic architecture, and haute couture. At nearly every corner there is a café with its tables and chairs spilling out onto the street; its busy no-nonsense waiters ready to greet you and the customers mastering the Parisian art of sitting undisturbed for a couple of hours, watching things happening and people going by. Typical Paris cafés are not just coffee shops. They are centers of social and culinary life in the city. Existing since the 17th century, Paris cafés serve as the meeting place, neighbourhood gossip hub, rendezvous spot, a place to relax, to refuel, and feel the social and political pulse of the city. They generally come with a complete kitchen offering a restaurant menu with meals for any time of the day, a full bar, and even a wine selection. The first café in Paris opened its doors in 1686. It was Café Procope in the city’s 6th arrondissement, where it still functions today, only steps away from Boulevard St-Germain and the lively Quartier Latin. Follow the footsteps of luminaries like Rousseau, Voltaire, and Benjamin Franklin and go there for coffee and conversation amidst its lavish interior.

Coffee and croissants, the staple of the Paris café culture

Coffee, the devil’s drink in Europe

Although coffee has been known to mankind since 850AD, it was introduced in Europe in the 17th century. At first, Western society was averse to the bitter, dark brew. It was dubbed as “Devil’s drink” and came under the scrutiny of the Vatican. Then came the gourmand Pope Clement VIII who took one taste and declared that “This devil’s drink is delicious. We should cheat the devil by baptising it.” After this, the popularity of coffee spread like wildfire across Europe. It still had a polarising effect with half the fashionable society swearing by it and the other half claiming coffee to be a passing trend. In 1686, the first coffee house in Paris, Café Procope opened its doors in the city’s 6th arrondissement. It still functions from the same location today. Café Procope became immensely popular and similar coffee houses sprang across Paris. Thus the Paris café culture was born.

Café des Deux Moulins, one of the locations of the movie , Amelie

Over the years, the Paris café culture became a staple of the city and for many café’s clientele, the coffee itself took a backseat. They came to exchange news, gossip, and rumours, and such was the networking influence of the Paris café culture that in the 17th century, the spoken word was thought more reliable than the written. During the dangerous and unstable times of the French Revolution, Paris café culture took a more serious role. The cafés across the French capital city established themselves as the social meeting place, where the common people came to engage in political debates, plans, and intrigues. The cafés became places where the young Napoleon and his likes, could be found playing chess and planning. Following the fall of Napoleon, Paris experienced a calm French Restoration period. The Paris café culture soaked up the ambient climate and started cultivating a more relaxed atmosphere. They became places for enlightening, expansive philosophical discussions rather than angry political debates. The late 19th and early 20th centuries brought prosperity across Europe. This period saw great strides being taken in the fields of art, literature, and science. Eiffel Tower soared into the Parisian sky, Louis Pasteur showed the world how to be safe and the haute couture of the city took the world by storm. Impressionists and post-Impressionists artists created masterpieces by the dozen and from Van Gogh to Gaugin, Matisse, and Toulouse-Lautrec, everyone participated in the Paris café culture. In Paris café culture society, artists, writers, and great thinkers mingled with members of the higher classes, and they often the thin line between hedonism and excess.

The Great Gatsby era of the Paris café culture

Bohemian lifestyle became trendy and the risqué element of the eccentric and exhilarating reputation of the Paris café culture drew freedom-seeking foreigners in hordes. Pablo Picasso, Ernest Hemingway, and their contemporaries found refuge in the creative café social scene and it is at the Closerie des Lilas where Hemingway first read Fitzgerald’s manuscript for The Great Gatsby. The enigmatic Fitzgerald novel embodied the decadence of the “années folles” (the crazy years) and the Paris café culture became luxurious. The Parisian boulevards became lined with opulent cafes in which large mirrors, gilt work, polished brass, and dark wood embellished the interiors. Stained glass windows and comfortable, deep couches became the need of the hour. Simultaneously, the street cafes of common people also received make-overs and thus came into the scene, wooden tables, tiled floors, and the characteristic zinc counter.

Absinthe, Pastis, and other excesses of the Paris café culture

Even though the interiors of the Paris café culture underwent changes, their purpose remained the same. That Art Nouveau era was a time of excesses and as expected Paris did nothing in moderation. Thus grew the popularity of exotic alcoholic drinks and liqueurs like Absinthe, the ‘Green Fairy ‘, Pastis, Chartreuse, etc. Paris café culture remains strong even today and the French capital has the highest concentration of chic and trendy cafes, both big and small in the Latin Quarter on the Left Bank and in Saint Germaine. The quintessential French cafe has indoor seating with small outdoor tables, plenty of wooden paneling, and red and black decor. However, these cafes are slowly getting extinct and today, there is a handful of zinc counter cafes or zinc bars in entire Paris. Mélac in the 11th arrondissement, Le Laffitte in the 9th arrondissement, and Le Béarn in the 1st arrondissement are some of them.

There are a few unspoken Paris café culture etiquettes that are as ingrained in the people as the need for the coffee itself. For example, Paris café culture etiquette dictates that you call the waiter Monsieur. For a long time, Paris waiters had a reputation for being overbearing and superior and thankfully, on this trip, I found it to be changing. Another idiosyncrasy of the French café culture is that there are normally no menus offered automatically as the choices are quite standard. However, you will also get your bill with your coffee but you can pay when leaving. Coffee is the most popular beverage served at a Paris cafe and 60% of French café goers have a preference for “café” or espresso served in a small cup. Other popular drinks are café au lait (coffee made with steamed milk and a choice for the morning), petite or grande café crème or Café Noisette ( a single or double espresso with a little cream), Café Leger is weak espresso as it has double the water and Café Americain is what we call filter coffee.

Another charming cafe near my hotel

A Croque Monsieur is a hot ham and cheese sandwich. The dish originated in French cafés and bars as a quick snack.