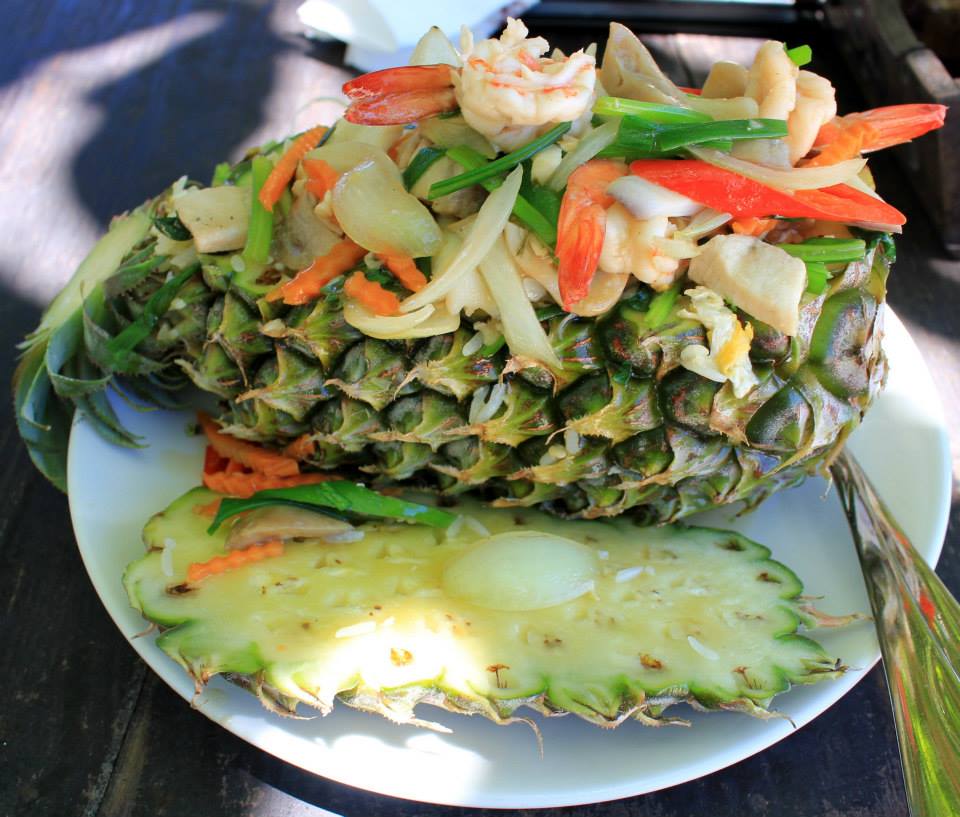 The next day was awesome and absolutely blue green stunning. A comfy minivan picked me up from my hotel around 8 in the morning and I was delighted to see that it had quite a few young solo travelers. We all bonded and by the time we reached the Kah Sohm Pier, south of Phang Nga town, laughter, jokes and travel stories filled our van. We got into the long til boat and sped away into the green limestone jungle with lovely salt breeze caressing our faces.

I loved the airy spaciousness of long tail boats and their history as interesting as the water craft. Traditionally known as Ruea Hang Yao in Thai, the most interesting characteristic of this boat is its use of secondhand car or truck engine. This indigenous SE Asian boat is nowadays mostly used for ferrying tourists, but in some remote Thai provinces, long tail boat competitions are huge local attractions.

Immediately upon leaving the pier and a small patch of interconnected mangrove canals brooded against backdrop of rolling lush hills. Big aquatic birds dappled the water and the glistening mangrove forests with white and browns and a huge blue sky smiled overhead. The water was gentle, glassy in a shade of loveliest aqua green and while it was beautiful enough to keep us hooked, the spectacular Phang Nga totally blew our minds away.

Technically, while it was in the neighbouring Phang Nga province, the (Phang Nga) Marine National Park and Ramsar Site was easily accessible from both Krabi and Phuket. Ecologists and archaeologists claim that around 10,000 years ago when the water levels were lower, it was possible to walk there from both Krabi and Phuket. A shallow bay, Phang Nga has over 42 islands (including the famous James Bond island), limestone cliffs and caves, collapsed cave system, lagoons or hongs and a rich abundance of fauna, sea grass beds and coral reefs. Needless to say it was breathtakingly beautiful. We sailed between the dramatic limestone cliffs of the bay, took in its unbelievable emerald green water and the yachts, long tail boats and picturesque junk barges floating in the distance. It was undoubtedly extremely popular yet somehow even the huge number of tourist boats could not mar its peaceful jaw dropping beauty and tranquility.

We cruised over to the needle shaped limestone sea rock James Bond Island and got off at the Khao Ping Kan. The precarious Ko Tapu or James Bond Island stood ahead, its strange limestone rock formation reflecting calmly on the shallow green water of the bay. This indigenous rarely visited area shot to fame in 1974, when some scenes from the James Bond Movie “Man with the Golden Gun” were filmed there. Ever since, Ko Tapu got renamed as James Bond Island (only used by tourists) and has regularly featured in every Krabi/Phuket itinerary. In 1981, this strange limestone rock got included in the Ao Phang Nga Marine National Park and in 1988, tourists boat got forbidden to approach Ko Tapu. This measure was taken to protect the limestone rocks at the bottom and near the islet from eroding which would lead to its eventual collapse.

According to local legends once upon a time, there was a successful fisherman who used to bring home many fish every time he went to the sea. However one day he could not catch any fish and kept picking up a nail with his net every time he tried. In spite of throwing the nail back repeatedly into the sea, it found its way back in to his net, every time he cast it. Furious, he took his sword and cut the nail in half with all his ferocious strength. Upon touch, one half of the nail jumped up and spiked into the sea forming the strange looking Ko Tapu (Nail Island). Although scientists account its peculiar shape to tidal erosion and tectonic movements of the barrier reef which formed the area in Permian times, the fisherman story is any day more fondly explained by the locals.

We paid tax at the government office at Khao Ping Kan, avoided vendors selling corals and encased insects and hiked around the little island. Khao Ping Kan actually consist of Ko Tapu and the island which held the government office and collectively they are referred as James Bond Island. The island had a steep hike, 2 sandy beaches and a few caves. We explored the strange flat and slanting cave formations, took in its strange mix of evergreen and dry cactusy vegetation and relaxed on the beach. Although the water was a little silty, it was warm, clear and teeming with life. Mud skippers, salamanders and colourful little crabs ran amok and we chased them playfully under a warm smiling sun.

Soon it was time to go and after numerous photo stops in front of James Bond Island (plenty of silly gun holding poses with pouts) we went back to our long tail boat to head towards Ko Panyee, floating sea gypsy village for lunch. From James Bond to sea gypsies, our blue green Phang Nga day was getting more awesome every minute.

I left for Phang Nga early the next day

It was a beautiful clear day

And we sailed away in to

On our faithful long tail boat

And the famous James Bond Island

Till it was time for lunch

And some jungle waterfall fun