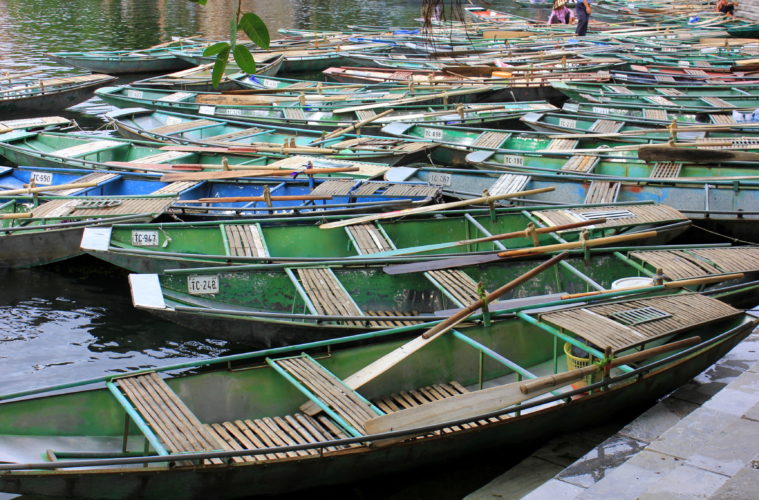 Hoa Lu served as the capital of Vietnam in the 10th and 11th centuries. It lies 90 kilometers south of Hanoi in the village of Truong Yen Thuong village, Truong Yen Commune of Hoa Lu district in Ninh Binh province. For centuries the mighty rulers of the North made Hoa Lu the seat of their power and it was the economic and political center as well. The “ancient capital” (as Hoa Lu is known) used to be a formidable fortified city with strong Inner and Outer Citadels. Spread over a large area, the city included defensive earthen walls, palaces, temples, and shrines and was surrounded and protected beautiful karst mountains.

Hoa Lu lies in the heart of rural Vietnam

Hoa Lu is a journey to rural Vietnam

Presently, none of this remains and the only remnants of a capital city so glorious are a few 10th-century royal temples and the craggy limestone hills. Hoa Lu is a pleasant day trip from Hanoi and is usually clubbed with Tam Coc. Most small group tours stop at Hoa Lu before venturing deeper into Tam Coc and it is a pleasant place to get introduced to the rustic beauty of Ninh Binh province. The first sight which usually meets most visitors at Hoa is of a Vietnamese man in a conical bamboo hat and his beloved water buffalo. Now water buffalos are as special to the Vietnamese as elephants are to the Indians and the former makes use of their uncrowned national animal better. One can see them everywhere in rural Vietnam and they form the backbone of the Vietnamese peasants.

Hoa Lu is a perfect day trip from Hanoi

Here lie the remnants of a glorious capital city

Thus, with that sight, you can imagine yourself being in the heart of the rural Ninh Binh and it is a beautiful hinterland instead of a once glorious capital city. The temples which stand there do not appear very striking to the foreign eyes, though their beauty is soothing. The whole complex is shaded with lush trees, cobbled paths, flowering shrubs, stone statues, and lily filled ponds. The prettiest sight, however, is that of the ancient capital being hemmed in by emerald green paddy fields which stretch up to the craggy limestone hills.

You may like: A DAY TRIP TO PERFUME PAGODA FROM HANOI

The Vietnamese peasant and his buffalo

The fall of Hoa Lu

At first sight, Hoa Lu or the remains of it look isolated and for centuries this was the biggest advantage of the former capital. The only access to the capital city was through the interconnected Hoang Long River channels which ultimately led to the ocean. This magnificent river system stretched from the provinces of Ninh Binh and other northern provinces to Hanoi and served as the lifeline of the empire. It was used for transportation, trade, irrigation, and daily water supplies. Though this remoteness helped save Hoa Lu from foreign attacks, the limited access to the outside world led to its economic and political downfall. These and many other reasons compelled the Ly Dynasty to shift its capital city to Hanoi and Hoa Lu soon got lost in the cracks of time.

I had read about Hoa Lu before visiting the site. Based on my experiences of India’s national heritage sites, I went there with an expectation to see gloriously restored ruins. What met my eyes were ghosts of the past and the common peasant lifestyle predominating the beautiful region. This shocked and awed me at the same time and I remember murmuring to myself as we were leaving Hoa Lu the strong words, “How the mighty have fallen!”.

Recommended Read: MY VIETNAM TRIP IN A NUTSHELL

A village near Hoa Lu

Option 2 – Many Hanoi tour agencies offer a day trips to Hoa Lu and Tam Coc for around $21/per person. This fee includes a buffet lunch, necessary entrance fees, transportation and/or bicycle rental. The tour is clubbed with Tam Coc or Bich Dong and starts early around 5:30 AM. One reaches Hanoi back at 7:00 PM. Hanoi tour operators also offer a transfer to Ninh Binh. Hunt around for the best bargain.

Although the original fortified citadel of Hoa Lu no longer exists, the palaces and temples in Hoa Lu are still intact. One can visit the following temples at the “ancient capital”.

King Dinh was the king of the first centralized feudal state of Vietnam. Since he unified the region, the inhabitants built this temple to commemorate and worship him. Visitors can also worship his sons, his wives, and his subordinates at this temple. It faces the mountain Ma Yen, which is the tomb of King Dinh.

Located 500 meters from the King Dinh temple, this shrine is dedicated to King Le, the first king of the second feudal state of Vietnam. This temple is a little bit smaller than the one of King Dinh.

The two temples of King Dinh and King Le are special due to the statues that decorate them. Both the temples highlight the best of the ancient Vietnamese architecture.

Nhat Tru Pagoda was built in the 10th century. It was used as a meeting place for the monks. At that time, monks were much revered in the Vietnamese culture and were often invited by the kings to discuss important national issues.

One of the stone statues of Hoa Lu

Other Attractions near Hoa Lu

The three Tam Coc Caves were created by the Ngo Dong River flowing through a mountain. A local sampan ride through the river is very popular and is usually clubbed with a Hoa Lu day trip. Bich Dong is the second largest cave in Vietnam.

Between March 8 – March 10, Hoa Lu holds a festival commemorating its reign from 968-1010 A.D. The festival includes a beautiful procession, plays (usually about Dinh Tien Hoang), contests, games and a fair. Besides the ceremony, the festival hosts many traditional games such as boat racing, wrestling, and cheo singing.

Hoa Lu is a popular day trip from Hanoi

Lily-filled pond and a stunning rural backdrop of Hoa Lu

Hoa Lu was an erstwhile capital