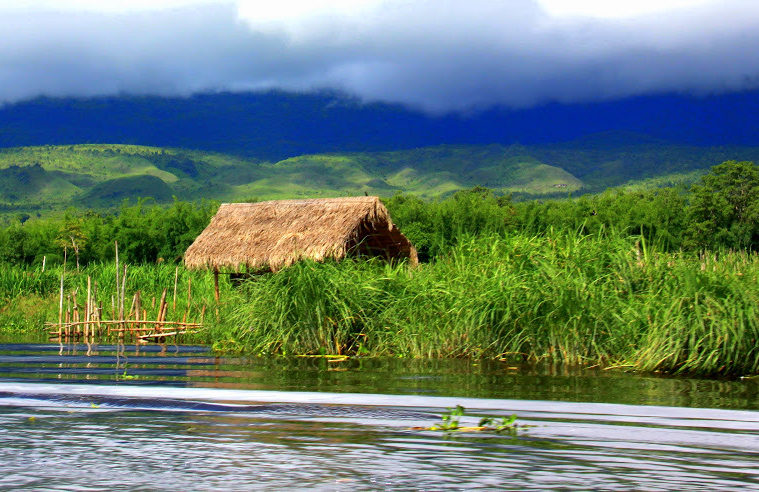 17 breathtaking photos that will tempt you to visit Samkar

For a very long time, I could not figure out if Samkar was a part of the Lake Inle or a remote village located at its southernmost tip. Even after visiting the place, the riddle continued to puzzle me, although I no longer gave much thought to it anymore. The reason was ts jaw-dropping natural beauty and the boat ride to Samkar was worth the hefty price and effort. That day started very early as usual with a fine mist of rain enveloping Inle at places. The lake lay still like a sheet of silver and clusters of houses on stilts stood like silent sentinels. The famous floating gardens heaved quietly with the flutter of waves created by my speeding boat and the sky looked pressed down by rain clouds. Even the air seemed to stand still and birds chirped merrily from small bunches of floating water hyacinths. It was a very silent, immobile dawn when I glided through the vast Lake Inle and by the time, Samkar came close the sun had pierced through the grey sky.

The three hours boat ride to reach Pa-O in Samkar

The young day dawned gloriously beautiful and the sun shone crystal clear, warm and toasty. A sky of the softest shade of blue spanned overhead and the busy lake grew quieter with less traffic at each turn. Apart from occasional water birds’ cries, it was deathly silent as villages spaced further away from each other. Vast fields of paddy meandered along the curves of the lake and soft, rolling hills stretched beyond them. Big, yellow sunflowers had peeped boldly from beyond the banks of tall reeds and farmers’ cows had watched from next to wooden water wells. Thin, winding canals had sliced through them all and locals in dugout canoes had fished among pink lily forests. Somewhere in the middle of the 3 hours boat ride, had arrived the evocative sight of a cluster of ruined stupas and the frequent showers had made them submerge in the lake water in a surreal way. A quaint toll booth had also happened sometime during the journey and the Pa-O territory had officially begun.

Recommended Read: The beauty of Bagan

The iconic Lake Inle of Myanmar.

Formerly a completely off-limits area to foreigners, the Pa-Os are a local tribe of Myanmar who for many years maintained fierce autonomy. They had their own army, tax collection system etc and were in locked horns with the ruling party. However, with recent coming to terms with the Myanmar government, in 2003 the region was opened to foreign visitors although only a few trickled down there. Samkar, despite its accessibility, still remained off the well-trodden tourism radar and that is why the region is magically untouched. That was the essential charm of Samkar, that morning and it was a little far-flung village whose claim to prominence was its super strong rice alcohol. Otherwise, it was a rural idyllic place in Myanmar where life has remained unchanged for hundreds of years. Presenting a photo essay of the idyllically beautiful Samkar of Lake Inle, where Myanmar becomes beautiful timeless Burma.

And a long boat ride,

Took me to the

Of iconic Lake Inle of Myanmar.

Samkar was tranquil and quiet,

Located in the remote corner

Of the vast Lake Inle,

Samkar is all about friendly locals,

And being in the middle of nowhere.