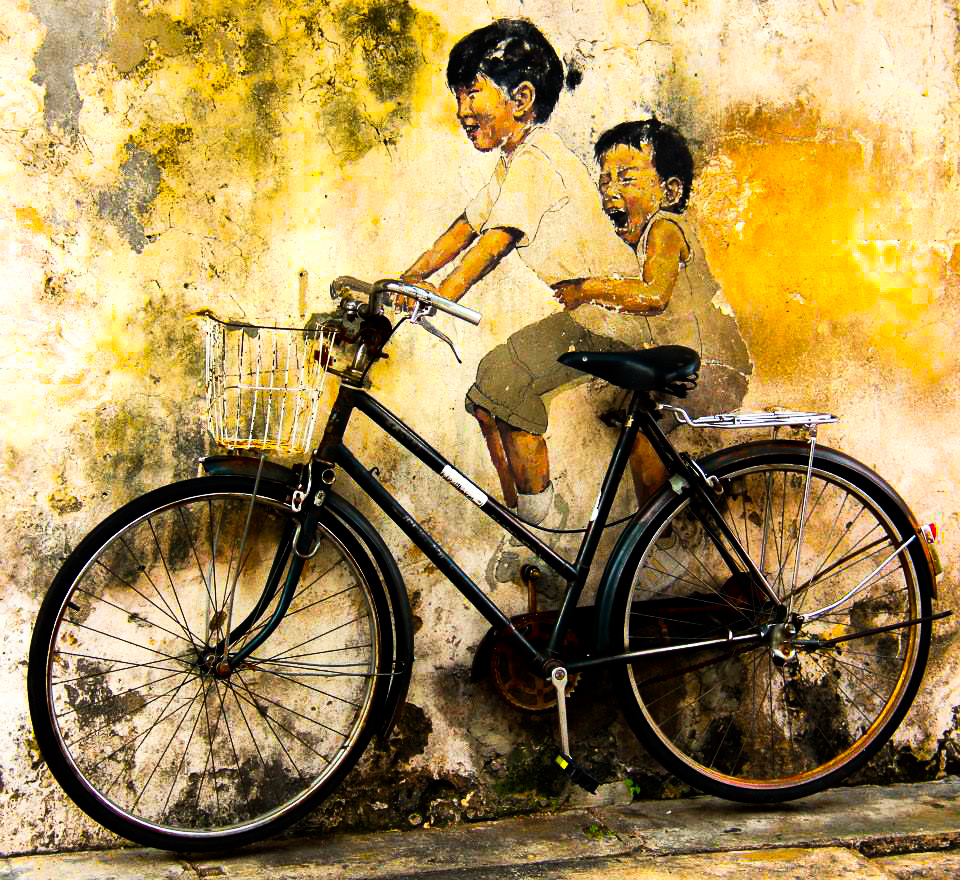 In my opinion, Penang wins hands-down anytime over Kuala Lumpur and this beautiful island is full of interesting things to do. I simply love it there: the food, the old city, the culture, and the tons of outdoor activities. However, topping the list is Georgetown Penang street art, and it ranks as one of the island’s prime tourist attractions. What I love most about the street art of this interesting Malaysian town is how concentrated they are and how you can spot beautiful wall art at nearly every nook and corner of Georgetown.

One of the 101 Lost Kittens murals

Georgetown Penang street art history is relatively young. It all started in 2008 when Georgetown received the prestigious title of the UNESCO World Heritage Site. The title kicked off a beautification drive in the city and in 2009 the first art project called Making George Town was kicked off. This project included only cartoon steel rod sculptures that depicted the local lives of Georgetown residents in days gone by. Some of these metal sculptures can still be found throughout the city today. 2012 saw the beginning of the art project called Mirrors George Town. It is this project that invited the Lithuanian-born artist Ernest ‘Zach’ Zacharevic to paint 6 pieces for the annual Georgetown Festival. This Georgetown Penang street art project rocketed the Malaysian city on the tourism map and these murals attracted hipsters travelers in hordes. They became the must-see attractions of Georgetown and influenced many such projects in the following years. While Ernest Zach’s street art depicted the lives of the local people, the 2013 project called Artists for Stray Animals raised awareness for stray animals. It was called the 101 Lost Kittens. 2014 saw a former bus depot being turned into an art center and the Hin Bus Depot collaborated with Urban Nation for the Urban Xchange: Crossing Over street art project that drew many street artists from all over the world. The same year, Russian artist Julia Volchkova started painting the city walls with many beautiful murals. These were influenced by the local culture and beautifully captured the soul of the island state. In 2018, China House inaugurated Art Lane Penang – an alley full of street art, and Georgetown Penang street art created headlines in the artsy world.

Boy on a bike location

No Georgetown Penang street art list can be complete without mentioning the famous works by Ernest Zacharevic. He started the “Mirrors George Town” to show the multicultural local life of the city and some famous artwork under this project are as follows:

Start at Chew Jetty, and slowly walk your way to the famous Armenian Street. This way you will see the most famous and the oldest murals along with some brand new works. The Georgetown Penang street art that is not to be missed is as follows:

Found all around the famous Armenian Street, some 13-ish murals showcase a specific subject: cats. Started as a part of the George Town Festival in 2013 by Artists for Stray Animals (ASA), the aim of this project was to raise awareness for stray animals, and ever since, many more such cat-murals have appeared. Some of the most famous ones are as follows:

For a guided Georgetown Penang street art tour, click on this interactive map by Where Goes Rose.