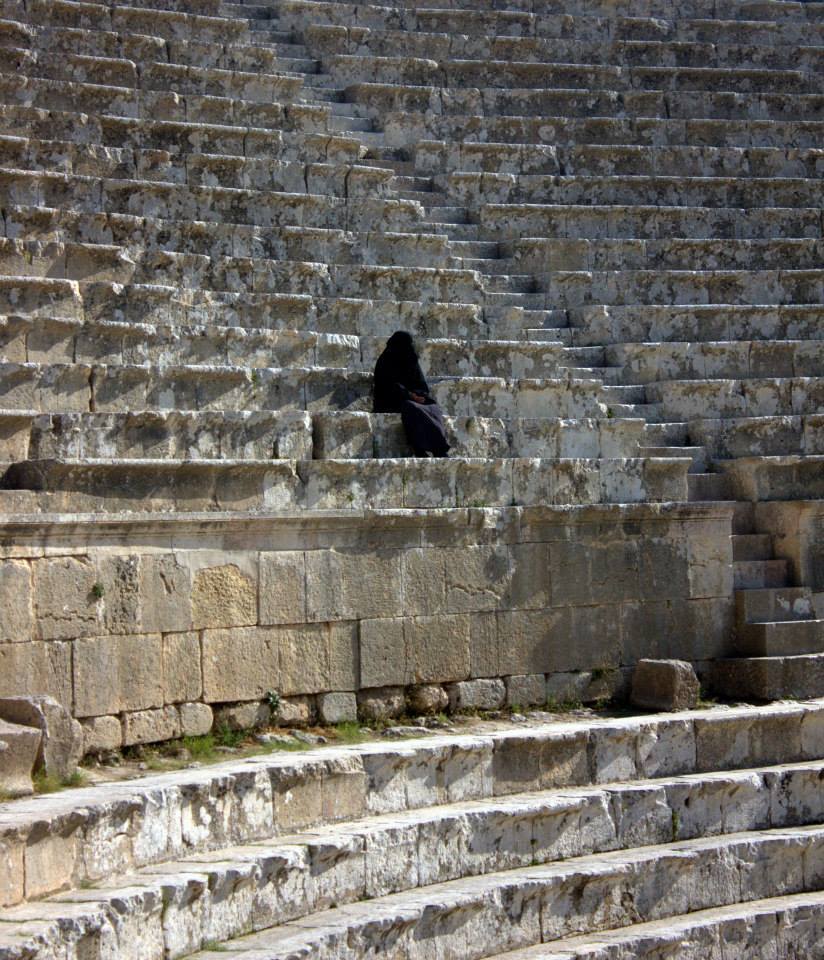 I woke up sometime around late noon and went out for a walk. The nap was not as refreshing as I had expected because strangely the hotel suffered from 2 brief power cuts. Even back home, power cuts were history and in a rich country like Jordan, for them to occur struck me pretty odd. Amman however was an absolute delight. A most underrated Middle Eastern city, it was a treasure house of secret wonders. And it totally shattered my notions about the Middle Eastern culture.

Jordan is at the crossroad of East and West and is one of the most progressive Middle Eastern countries. I had read about the lovely queen Rania and her excellent social philanthropic work, especially for upliftment of women but nothing had prepared me for the sight of ladies in hijab smoking or buying cigarettes publicly. I had seen it in Male and while it was a very unfamiliar sight for me at that time and place, to experience the same in an Arab country was totally unbelievable.

I stepped out in the still bright sun and wandered along the main road, which although not busy was very cacophonous. Shopkeepers sat outside their stores and chatted, music blared, street vendors peddled wares loudly and street cafes were filled with noisy customers. I crossed the road and climbed up the littered, partially broken stone steps to go to the higher levels of the city. It was a strange mix of ancient and new as shiny bright cars meandered along the winding hilly road bordered with scraggy trees. Fantastic street art filled the walls and the view became more and more beautiful as I climbed higher. It was almost deserted as I stared down from the view points and an image of a busy city shimmered in the sun. I wandered along, bumped into hole in the wall curio shops, book stores, traditional cafes and inquisitive locals as the screened off houses of the moneyed peeped from behind rich plump bougainvilleas and firs. Thirst struck soon and I walked back to the bowl like main road. A friendly juice shop stood right opposite my hotel and I took a refreshing much needed break.

The juice shop also sold sandwiches and falafels and I opted for a quick bite there. I had not eaten anything post the horrible in flight breakfast and hunger suddenly made its presence felt. I eased into one of the chairs scattered on the sidewalk and took in the charmingly laid back sights and sounds of Amman. The city was a smoker’s paradise and the sticky smell of cigarettes mingled a tad obnoxiously with sickly sweet aroma of sheesha (water pipe) and pollution. The main road lead to the Husseini mosque, which was Balad/ downtown Amman and cacophony grew louder as I neared the heart of the city. A two way palm tree bordered street ran straight and branched off into many tiny winding lanes on both sides. Local shops and markets filled these lanes and a busy Jordanian life pulsated within these arterial streets. Dazzling jewelry stores, swanky restaurants, opulent fort like banks and block like shopping complexes lined the main road, but the grungy canopied lanes throbbed with fantastic local flavours. Merchants sold falafel, sticky Arab sweets, stony cactus fruits, religious trinkets and a tangible aroma of food hung heavily over loud babble of exotic tongues. It was an exciting blend of quaint, caravanserai Arabic life with hints of restrained modern sensibility.

It was obviously a very touristy area because every other shop was a money changer and all kinds of souvenirs were on sale. Traditional embroidered bedouin garbs, costume jewelry, fake flowers, lingerie, traditional crystal bottled perfumes, chandeliers, Jordanian daggers, key chains, brass ornate teapots and keffiyeh (checkered Jordanian male headpiece) crammed every inch of the hole in the wall shops and although not annoying, there were too many touts hustling. It was a photographers paradise and I soaked up the dazzle, bustle and insinuating aroma of baklava. Jordanians are one of the friendliest people and happily pose for cameras. Nearly everybody made it a point to welcome me (every tourist) and it felt very nice to inquired of my country, traveling status etc. Jordanian males, unlike their few Arab counterparts were real gentlemen and while they stared and smiled at women travelers they never harassed or behaved in any unwarranted way.

I ran into an old friend at a vegetable market near Balad and it felt almost movie like magical to bump into someone very dear from past in such an exotically romantic city. Time, textures and colours of the bustling market flew as we stared incredulously and chatted non stop. Sun mellowed slowly around us and string of bulbs started lighting up one by one. The tiny cloister of shops became more and more crowded and we got pushed and elbowed constantly by harried shoppers. It was evening and everybody was in a rush to conclude the day. We left the market, walked over to the Roman theatre and sat down on the stone steps. It was a balmy Amman evening and prayer calls rang out beautifully through a gorgeous Arab sunset. We sat unaffected by the noisy crowd of excited tourists as time engulfed us back into the past. Stars lit up a deep blue sky and it was a most magical time, fitting for a lovely quaint Middle Eastern city. Still dazed by our mutual rediscovery we walked happily hand in hand into depths of Amman. Took me to the charming Amman hotel It was in Balad The exotic heart of Amman And a laid back Middle Eastern life