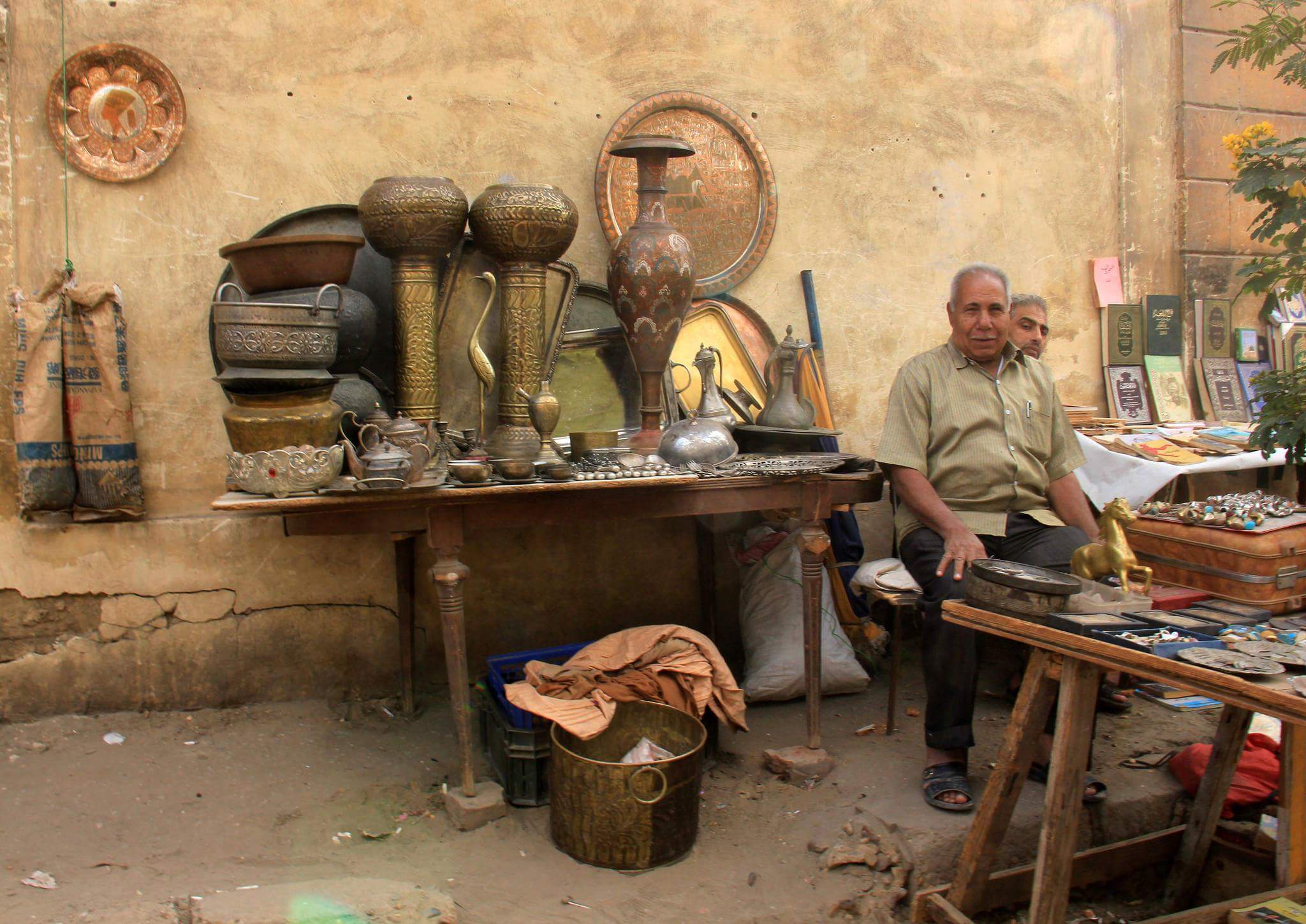 Friday Market in Cairo‘s City of the Dead

There are markets and then there is the Cairo Friday Market. Popularly known as the Souq al Goma, this sprawling commercial jumble takes place under a highway flyover (El Tonsi Bridge) and despite what the name suggests, is just not held on Fridays. A massive fusion of animal market, flea market, junk market, antique market, and textile market, it is believed that you can find anything and everything at the Souq al Goma. The market begins at the crack of dawn and by 10 AM, turns into a crushing sea of people. The teeming mass of Cairo have not residents flock to the market and shop, bargain, sell, and barter nearly every possible thing under the sun. From dogs, birds, fishes, snakes, to antiques, used clothes, machinery spare parts, bicycles, food, hand-woven carpets, shoes, and total junk, everything is for sale at Souq al Goma.

Leaving the expat bubble behind

Bursting the expat bubble in Cairo

Imagine this to be the Egyptian version of the famous Chatuchak Market of Thailand, except that it is bigger, grittier, photogenic, and more shocking. Tarek, Akash, and I visited the Friday Market on our first week in Cairo and it was an eye opening experience. We came face to face with the reality of the living standard of the majority of Cairo‘s millions of people and it was a tough slap on our expat lives. Living an expat life entails being securely tucked away in a luxury bubble and most of the time, you experience only the glitzy side of that country. Even though you see the civic hardships in your daily life, this security bubble makes you kind of blinded towards them. You stop noticing the hassles of the common man, accept the struggles and it becomes a part of the landscape of the country of your living. Escaping to your bubble becomes as easy as dismissing the heat by turning on the air conditioning. We too were comfortably living in our Zamalek island bubble, when a visit to the Friday Market brought us crashing down to reality.

Chicken seller at the market

Living with the dead

Its location in the City of the Dead was creepy enough for me and then I shuddered before entering the area. The residents however were seemingly nonchalant about it and they accepted living among the dead as something very normal. Cairo is equipped with five major cemeteries and these, at one time, used to be located in the outskirts of the city. The rapid expansion of the Egyptian capital in recent years, however, has encroached upon the resting places of the dead until these cemeteries got swallowed up by the city‘s massive urban sprawl. Overpopulation, housing shortage, and the sharply rising cost of living turned the cemeteries into homes and soon 5 million of Egypt‘s urban poor started living there. They shifted in hordes, taking over the cemeteries like squatters, and making the tombs of the dead into homes for the living. These residential cemeteries of Cairo lie along the Moqattam Hills and are collectively known as the “City of the Dead”. The Friday Market is held in the Sayeda Aisha district of the City of the Dead, and the grounds are as intriguing as the market.

You may also like: Burial Chambers of Petra, Jordan

The City of Dead is now a home for the living

Broken toilet seat, a doll with missing eyes, and a used toothbrush

We passed by the tombs which have been cleverly turned into houses and their use did not stop there. They also served as ironing boards, benches, beds, tables, and laundry desks. Television antennas popped up amidst the tombstones and clusters of spindly, unstable-looking illegal housing towered between them. Being illegal settlement areas, there was no sewer or garbage collection service in the City of the Dead and the only pop of colours come from the bundles of flowers being sold to be offered to the eternal sleepers. We found the City of the Dead extremely tough to comprehend, but it was nothing in comparison to the shock left by the Friday Market of Cairo. The goods on sale at the market were mind-numbing and more than once, we stood speechless by what the people shopped for. For example: What would you do with a fully flowered grimy used toothbrush? Yet, they were there, being sold by the dozen from a large plastic tub. Broken dolls with missing eyes, outdated television remote, used nails, plastic toilet seat cover, pieces of twine, dented hubcaps, and typewriters with missing keys were piled high on carpets spread on the ground and they jostled for space with women‘s lingerie, bicycles, loofah, olives, dates, lemons, spices, and dried fish.

You may also like: The flower market of Da Lat, Vietnam

From junk to jewels at the Friday Market

There was also a separate section for used clothes and many believe that they are taken off from the backs of the freshly arrived corpses. Bargaining happens hard there, with generous smatterings of Arabic flowery phrases and a carpet seller swore by his mother, as he overcharged us for a handwoven rug. Strangely, the vast amount of junk at the Friday Market was interspersed with some really hard-to-find antiques and the souq doubled up as an excellent flea market. Vintage records, rare coins, hard-to-find books, beautiful vases, hand-embossed copper plates, delicate crystal shishas, and old photographs were for sale along with odd, mismatched wine glasses, cuckoo clock, a gramophone, and World War I era Singer sewing machines with serial numbers intact. The wide spectrum of shopping at the Friday Market was mind-numbing and the things were either outstandingly great finds or truly nightmarish. Nothing seemed to go to waste at the Friday Market and you can spend hours hunting for excellent flea market treasures.

The animal section of the Friday Market was heart-wrenchingly ghastly and from sickly puppies to rare birds, you can find every kind of animal species from Sudan and Eastern Africa for sale. Many looked like they were near death and the stuffed taxidermy animals made the market look horribly creepy. Preserved with all their feathers or scales intact, the dead stuffed birds, snakes, or monitor lizards decorated the shops selling fishes (even piranhas), falcons, shells, and weasels. Puppies yelped from bamboo cages, as birds squawked fiercely and ducklings for sale chirped in a most pathetic way. Rabbits stared with big frightened eyes and somewhere in a corner of the Friday Market, sheep were being sold from pens. The oddest section of the market was the dog mating area, where groups of men and boys brought dogs of all types and sizes to bargain with one another for the price of a mating. Similar to an erstwhile slave market, the more handsome and healthy dog fetched higher prices and once the fee was agreed upon, the men circled around the canine couple during the entire mating process. Many puppy sellers wander that area hoping to catch customers who come to mate their dogs. Since, these people travel a long way from as far as southern Egypt for this mating ritual, many buy puppies which go on to be farm guard dogs. That was definitely not a place for the faint-hearted and despite the horrors, the biggest shock of the Friday Market to me was the sense of dejection.

A bewildering amount of things were crammed into the Friday Market for sale and there was no telling where the goods came from, who rejected them, how did they get sold, from whom did they get stolen, or where would they go, if not purchased. It was a marketplace of the rare and the common, useful, and useless items, and invited an equally diverse spectrum of visitors. Masses of Cairo‘s poor rubbed shoulders with adventurous travelers, art directors looking for items for a movie set, struggling students, photographers, and families shopping for an impoverished girl‘s trousseau. Souq Al-Gom’aa was a halfway existence. People were halfway ethical, and they were refreshingly honest with their intention to fleece the shoppers and vice versa. The market itself was split with half-tucked under a bridge and the rest spread over the train tracks. Half of the vendors lived there, with the other half coming for work and in my eyes, no matter how many times you visit the Friday Market, you would probably just scratch the surface of it. Some things are unfathomable and Cairo‘s Friday Market in the City of the Dead, is exactly that.

The Friday Market is a man‘s world

The Friday Market occurs from 8 AM. until about 2 PM, under the Moqattam Hills. It can be reached on foot or by taxi from the Citadel. Go before 10 AM to avoid the crush of people. Tell the taxi driver ‘Khalifa’, the name of the neighbourhood, or ask for the Souq al Goma. Do not bring a lot of money, and do not dress flashy. Also, beware of pickpockets at the Friday Market. Women visitors are advised to explore the market with male friends, who know the area.

And the Friday Market continues…

Stay tuned for the next post on photo essay of the Friday Market in Cairo‘s City of the Dead.

P.S – This blog post is part of the weekly series called the Cairo Chronicles. Every week, Maverickbird will take on a new theme, emotion, and beauty of an expat life in the exciting, maddening city of Cairo.