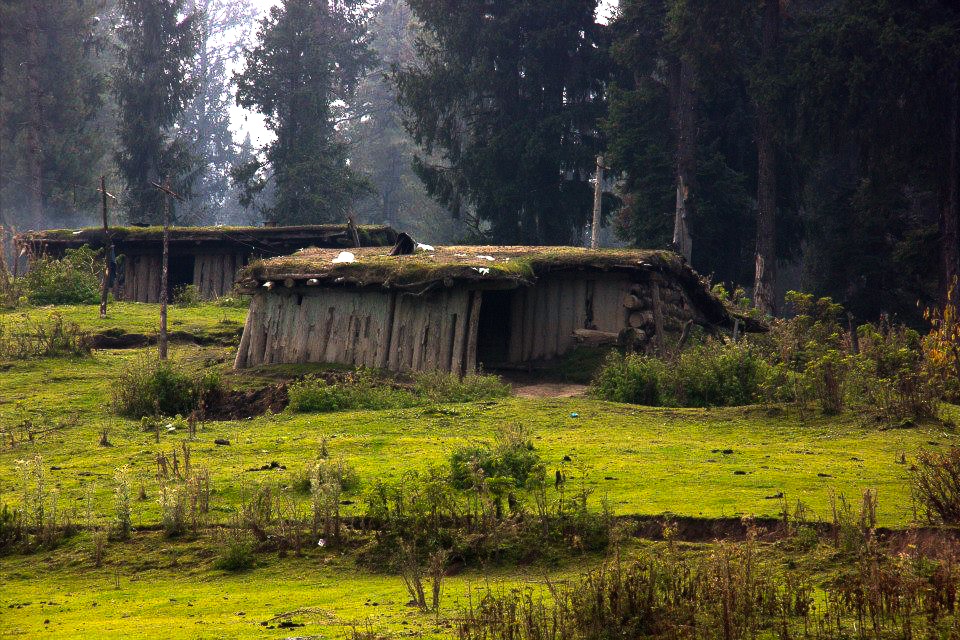 Yousmarg: The meadows on which Jesus walked

Yousmarg or “The Meadows of Jesus” is a lovely hill station 47 kilometers away from Srinagar in the Badgam district of Jammu and Kashmir. There are many who believe that Jesus traveled to Kashmir during his exodus and stayed at Yousmarg for some time. I had to attend a wedding on my way to Yousmarg, so did not have much time to explore it to my heart’s content. Moreover being late autumn a lot of trekking trails were inaccessible. So, it was one of those trips where the journey was nicer than the destination.

A beautiful drive from Srinagar

A beautiful quiet drive to Yousmarg

Despite being late autumn, it was a beautiful sunny day when I set off for Yousmarg. The sky was deep blue and completely clear of haze. I drove down winding mountain roads, past cultivated fields, and pine and fir forests. Sleepy little villages hummed with preparations for winter and the countryside looked primped. Women gathered firewood, herded sheep and goats, and worked on the vegetable gardens collecting the last bits of haak saag (edible leafy vegetables). Hay lay rolled in neat bundles and logs were being numbered, registered, and carted off to the markets. In winter heavy snowfall isolates the area and electricity remains erratic at best. Saffron was still flowering at places but the almond trees lay bare. Maharajji apple trees were bursting with fruits and apples hung in clusters like Christmas decorations. Children collected them in baskets to be prepared as jams as these apples are non-sweet and suitable for diabetics.

Meadows, forests, and wildflowers of Yousmarg

Charar-e-Sharif stood like a weary sentinel en route to Yousmarg and the new building glowed mellow in the afternoon sun. It was a pity that nothing of the old building remained since the grand old structure was built without using a single nail. Yousmarg arrived shortly like a pleasant dream. Hundreds of wildflowers covered picturesque rolling meadows, pine forests cast deep blue shadows, and moss grew fat over rustic pine cabins in the backdrop of the snow-capped peaks of the mighty Pir Panjals. The local women were coating the cabins with thick layers of paint and stocking up the animal sheds with fodder. I went for a horse ride into the tranquil pine forests and was surprised by the amount of wildlife there. There were hordes of monkeys, birds, and wild goats. The mustachioed monkeys were shy and peeped at me from behind the wild cherry bushes, unlike their aggressive mainland counterparts.

This is a lesser-known gem of Kashmir

There were lots of fruit, fir, and pine trees protected by the Jammu and Kashmir forest department. In fact, the fruits and lumber of the area are registered, numbered, and sold only by the forest department to prevent illegal deforestation and to keep the virginal beauty of the place intact. It was a beautiful ride and the horse owner was a friendly, talkative old man. He took me to his hamlet, introduced me to his family, and made me stay for lunch. It was a simple log cabin without electricity, modern plumbing, and with no modern comforts. He chatted a lot, happily translated, and told stories of a Kashmir long forgotten, the paradise it was when he was young. His little village in Yousmarg was tucked away under ancient firs and for most of his fellow villagers, Srinagar was the center of the world. They had seen New Delhi, Mumbai, and the rest of the country only on TV and the ill-fated conflict surrounding their home was a mystery. However, they were no strangers to violence: violence inflicted on them by all sides involved in the bloody mess. Given guns at gun points, getting their food and shelter stolen at gunpoint, and punished at gunpoint for harbouring perpetrators of violence..it was a lose-lose situation for them.

A beautiful walk through the forest

The silent valley and peace of Yousmarg

Yet they hummed, were generous almost to a fault, and seemed to truly love being there. These were people rooted to their land more deeply than the firs and they loved every fern, stone, and animal on it. I thanked his family before riding back along the DoodhGanga River, rested under dewy ferns, and prayed at a small shrine by a tumbling spring. The horseman sang a lonesome tune and it resonated till the snowy peaks. Not even a single bird could be heard. It was only his song in the silent valley and a surreal peace that hung heavily. I was in a lost world deep in my thoughts when the horseman broke my reverie.

Yousmarg is far away from the crowd

Yousmarg is for offbeat travelers

I was hustled out of there quickly as the old horseman claimed having seen a hungry leopard in the vicinity of Yousmarg. In fact, two of his neighbour’s sheep were attacked by the animal recently and it was rumoured to be a young starving mother. The sun hid behind the clouds and it became very chilly. DoodhGanga trickled past like just another glacial stream, her flow reduced by a hydel power project. Only the milky white water (DoodhGanga=River of Milk) reminded me of her former glory. I left soon after tipping the horseman generously. It was a futile attempt of gratitude because the peace he gave me was priceless. He could use some extra cash especially with the advent of winter and I could do with some heartfelt blessings. The sunset soon, rosily over the tranquil pastoral country as I rushed towards Srinagar along with the hairpin mountain turns. It was raining hard by the time I reached Srinagar and it suddenly became quite cold. As I warmed myself by the fire that night and listened to the noise of the rain, I thanked my stars that I was able to discover Yousmarg before it got lost to commercial tourism.

Location: Yousmarg is delightfully still underdeveloped and one of the lesser-known places of interest in Kashmir in Jammu and Kashmir, India. It is located in the Badgam district of Jammu and Kashmir, approximately 50 kilometers from Srinagar.

How to Reach: Srinagar is the jumping off-base for visiting Yousmarg. The closest airport is located there and it takes around 2-3 hours to reach Yousmarg from Srinagar. The road until Charar-e-Shariff is mostly flat and it gets steep uphill in the last 17 kilometers. The easiest way to reach Yousmarg from Srinagar is by taxi and it costs around Rs 4000. There is no direct bus from Srinagar to Yousmarg. Local buses go only up to Charar-e-Shariff and once you arrive at your destination, you will have to look for a shared cab for Yousmarg.

Best Time to Visit Yousmarg: Yousmarg being located at 7861 ft above sea level, remains closed during winter. Spring, summer, and autumn are the best times to visit Yousmarg. The suitable months are from April to June or late August, September, and early October.

Where to Stay in Yousmarg: Accommodation at Yousmarg is very limited. The only available option comes in the form of JKTDC tourist bungalows and cottages. The accommodation is called Hotel Kongposh and they offer very basic facilities. Even the meals need to be pre-ordered with the caretaker of the property. Trekkers should carry their own equipment including tents and other necessary items. Also, bring a registered experienced guide with you from Srinagar or hire the services of any of the local pony owners or villagers.

Yousmarg Amenities: Mobile connectivity is not available at Yousmarg. There are also no medical facilities, pharmacies, banks, or ATMs. The nearest gas station and the mechanic can be found near Charar-e-Sharif.

Things to do in Yousmarg: In summer there are a couple of interesting treks which can be done from Yousmarg as there are beautiful alpine meadows, lakes, springs and pine forests in the area. Tosa Maidan is the most famous meadow, mostly frequented by pastoral nomads and the spring at Khag is well known for its curative qualities. Camping and expedition to various nearby peaks-Sunset and Tatakooti Peaks can also be done from here and these can be arranged through reputed Srinagar-based travel companies. Other activities include day treks to Fresnag, frozen lake in Sang e Safed valley, Halbag, Nilnag Lake, and fishing. Skiing and photography tours are also conducted here in winter. The J&K government has fixed rates of all touristic services including renting of woolens and tourists are advised to pay as per the set rates. The best thing to do in Yousmarg is to be one with nature. This is a destination for slow travelers.

A beautiful sight in Yousmarg

Getting Out: Since Gulmarg is just about 100 kilometers from Yousmarg, it makes sense to head over there instead of Srinagar. The drive takes around 4 hours and there are a few options of routes. One option is to take a diversion towards Khan Sahib from Chadoora, then head to Magam and finally take the road towards Gulmarg via Tangmarg. The alternative is to drive all the way back to Srinagar to get on the Gulmarg road, rather than navigating the interior routes.

Need more reasons to visit Yousmarg? Check out this marvelous post by Sandeepa and Chetan.

Jesus is believed to have stayed here.

Though this is highly debatable,

Yousmarg is the perfect place

For those seeking solitude and slow travel.

There is not much to do here except

Horse riding and being one with nature.