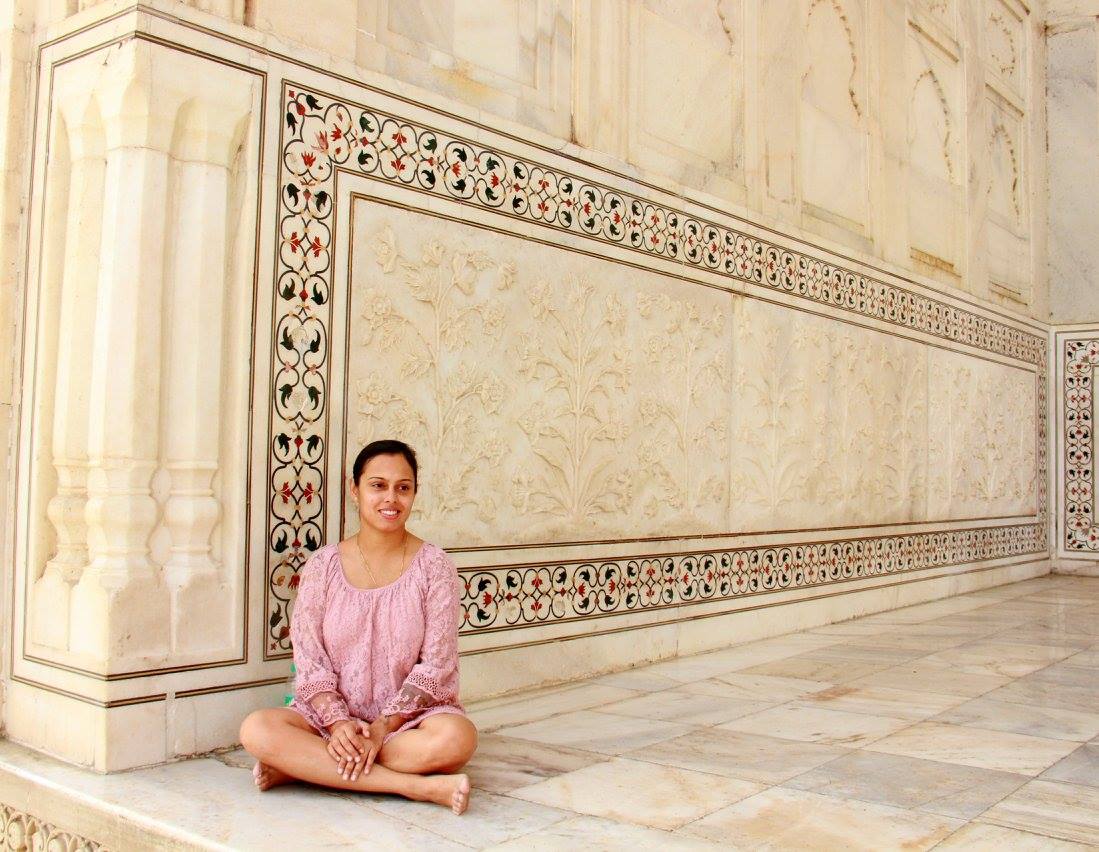 The access to the Taj Mahal (at least the one we took) was so horrible that by the time we reached the entrance, I was actually wondering if it was worth all that trouble. Although the white marble monument is touted as the most beautiful building in the world, I had a gnawing concern if it was actually worth battling the great Indian tourist trap. Being evening, there was not much crowd at the ticket booth and we bought the cheap entrance and camera ticket ( 20 INR for Indians, foreigner entry fee 750 INR and 510 INR for SAARC and BIMSTEC countries) and joined the steady stream of visitors.

The changing colours of the Taj Mahal

Upon entering the arched gateway, I got my first glimpse of the iconic beauty and it was one of the most marvelous sights I have ever seen. More than a decade later, I re-visited the Taj Mahal with Tarek and felt the same amazement at my second visit. Tarek was visibly moved at his first sight of the Taj Mahal and usually a  collective sigh ring through the crowd as the white marble monument of love emerges like a dream in front of expectant eyes. It is indeed the most beautiful building in the world and the splendour of the monument is breathtaking. All photographers, visitors, and Taj aficionados claim that there is no unflattering angle or light condition when it comes to viewing the Taj Mahal and it is reputed to be most alluring in the quiet hours of early mornings. Visitors claim that the sight of the Taj emerging from a veil of mist, bathed in the soft red glow is supposed to be truly magical and the monument changes colour. Play of light animates the Taj Mahal and its colour changes from soft grey and yellow to pearly cream and dazzling white.

“A Teardrop on the Face of Eternity”

On the evening of my first Taj Mahal visit, the mausoleum blushed a delicate rosy pink against a mother of pearl sky. It was so beautiful that even my 4-year-old Noni found it hard to not stare at it silently. We passed through the gateway and tumbled out inside its expansive grounds. Charbagh or the four Mughal gardens spread ahead and the Taj stood at the end of the garden. Although called Charbagh, it is actually a huge garden dissected by 4 waterways and a placid Taj Mahal reflected calmly on its still water. Dedicated to love, this magical marble monument had been described by the Nobel Laureate Rabindranath Tagore as ” a teardrop on the face of eternity”. It is perhaps one of those few monuments on earth, whose magical beauty remains undiminished by the crowds. Overlooking the now nearly dead river the Yamuna, the magnificent Taj Mahal was built in the name of love and it could be an ode only to the most beautiful human emotion.

A mausoleum for a favourite queen

When the powerful and romantic Mughal emperor Shah Jahan’s favourite wife Mumtaz Mahal or Gauhara Begum died while giving birth to his 14th child, he became so distraught with grief that his hair turned white overnight. He commissioned the construction of the Taj Mahal, to enshrine his beloved’s body and made it resemble paradise as described in the Holy Koran. Mumtaz Mahal was indeed dear to him and the fact that she bore so many of his children was glaring enough to prove his attraction for her, and he chose to be buried next to her after his death. Fondly known as the Taj (Taj Mahal is an Arabic Persian word meaning crown of palaces), the construction of this monumental love began in 1632, employing thousands of workers and got completed in 1653. A panel of gifted architects and finest artisans were hired for its conception and Ustad Ahmad Lahauri was supposedly the principal designer, although some claim it to be Ismail Affandi from Turkey.

You May Also Like: ITIMAD-UD-DAULAH’S TOMB: THE JEWEL BOX OF AGRA

Marble used in its construction was the finest one available in Makrana, Rajasthan and the gems used in the exquisite inlay work (pietra dura) were precious and semi-precious stones brought to Agra from different parts of the world. Onyx, amethyst, lapis lazuli, turquoise, jade, crystal, coral, mother of pearl were procured from far and wide places like Persia, Russia, Afghanistan, Tibet, China and from the depths of the  Indian Ocean. Calligraphy, perforated stonework or jali, exquisite floral carvings, and lovely onion domes are the distinct features of this beautiful structure and it seamlessly incorporates Islamic, Persian, Ottoman Turkish with Indian architectural styles.

We walked down to the iconic white monument, put on our shoe covers and climbed up the cool marble steps of the finely inlaid plinth. Perfectly symmetrical and rectangular in shape, Taj Mahal sat on a huge marble platform or Takhtgah and 4 tapering minarets flanked its 4 corners. The mausoleum glowed nearly translucent and shimmered in the evening light like a giant pearl and its vastness took us by surprise. Noni ran around the serene space gleefully while I waited in the queue to enter the main hall. Thankfully evening light discouraged many visitors from exploring the dazzling, but dim interiors and it took us just a few minutes to enter the mausoleum. The high octagonal hall contained the tombs of Mumtaz Mahal and her emperor Shah Jahan and the royal lovers looked very much in peace there.

The elaborate tombs of the royal Mughal couple

An elaborate tomb covered by a finely cut marble screen was the cenotaph of Mumtaz Mahal and it lay directly below Taj’s famous bulbous dome. Shah Jahan’s cenotaph was squeezed next to her and inlay works on both the tombs were exquisite. 99 names of Allah were etched atop Mumtaz Mahal’s cenotaph and Shah Jahan’s had a pen box, a sign of a male ruler. Soft evening light streamed in through finely cut marble screens and a hushed silence pervaded inside. The beauty of the main hall was unsurpassable and I wanted to linger there longer but my restless 4 years old wanted to run around the beautiful open space outside. We came out and I walked around the marble plinth, following Noni as she scrambled about. Monumental porches circled around the face of the monument and the Taj glowed like a million tiny subtle rainbows. Honeycombed on top and decorated with inlay work and perforated marble windows, it was the perfect place to take a break.

The ethereal beauty of the Taj Mahal

The sunset slowly and the colours of the Taj changed dramatically. It got tinged with light violet and palest of lavender before glowing luminous white against a twilight sky. It was not particularly a pretty sunset, but when it came to the Taj Mahal, it was not even required to be spectacular. Backdrop did not matter for this epic love story set in stone and whether on full moon nights, the misty sunrises, soft sunsets, shimmering midday heat or against darkening monsoon skies, Taj Mahal’s beauty strangely remained ethereal and immaculate just like when it was first constructed. Lights flashed in a row and the complex buzzed with sated happiness. It was closing time and yet once again Taj Mahal did not fail to mesmerize its visitors. We had another day in Agra and I decided to visit the complex again for a few hours. With so much beauty, it was hard to get enough.

Taj Mahal complex is located in Agra in India and is a part of the Golden Triangle tourist circuit. It is approximately 200 kilometers from Delhi. A UNESCO World Heritage Site, the Taj Mahal attracts a staggering 7-8 million tourists annually, which is around twice the population of Agra.

By Train – The Taj Mahal can be visited on a day trip from Delhi, though an overnight stay in Agra is recommended. Agra is well connected by rail. The main railway station is Agra Cantt and there are daily Shatabdi Express services from Delhi, Varanasi, and many cities in Rajasthan.

By Road – It takes less than 3 hours via the Yamuna Expressway to reach Agra from Delhi. The road starts from Noida and there is a toll tax of 415 rupees per car for a one-way trip (665 rupees round trip). Comfortable, air-conditioned Volvo buses depart from Anand Vihar terminal in New Delhi for Agraevery hour during the day. The cost is about 700 rupees per person. Agra can also be reached by air from major Indian cities or by an organized from Delhi.

When to Visit the Taj Mahal

The best time to visit the Taj Mahal, or rather North India, in general, is from November to February. The Taj Mahal is best visited at sunrise to avoid the huge crowds.

The Taj Mahal is open every day from 6 a.m. to 7 p.m except Friday. It is also open for night viewing on every full moon from 8.30 p.m. until 12.30 a.m., plus two days before and two days after the full moon. Night viewing is suspended during the holy month of Ramadan every year.

The foreigner ticket price is now 1,100 rupees, and 1,050 rupees cashless. Indians only pay 50 rupees cash, and 45 rupees cashless. Children younger than 15 years can enter free. Tickets can be purchased at ticket offices near the entry gates or online at this website. The foreigner’s ticket includes shoe covers, a bottle of water, a tourist map of Agra, and bus or golf cart service to the entry gate. It also enables ticket holders to enter the Taj Mahal ahead of any Indian ticket holders already waiting in line. Night Viewing tickets cost 750 rupees for foreigners and 510 rupees for Indians, for half an hour’s admittance. Children aged three to 15 years must pay 500 rupees. These tickets must be purchased between 10 a.m. and 6 p.m., one day in advance from the Archaeological Survey of India office on Mall Road. (Credit – Tripsavvy)

What to bring to the Taj Mahal

Though there are lockers available at the Taj, it is best to keep your valuables at your hotel.  You only need to bring the following items:

Things to remember before visiting the Taj Mahal

Visiting the Taj Mahal can be overwhelming for all the wrong reasons. Presenting a list of possible dangers and annoyances.

Tips for taking photos at the Taj Mahal

There are tons of different angles for taking photos at the Taj Mahal. Here are some tips to photograph this iconic monument,