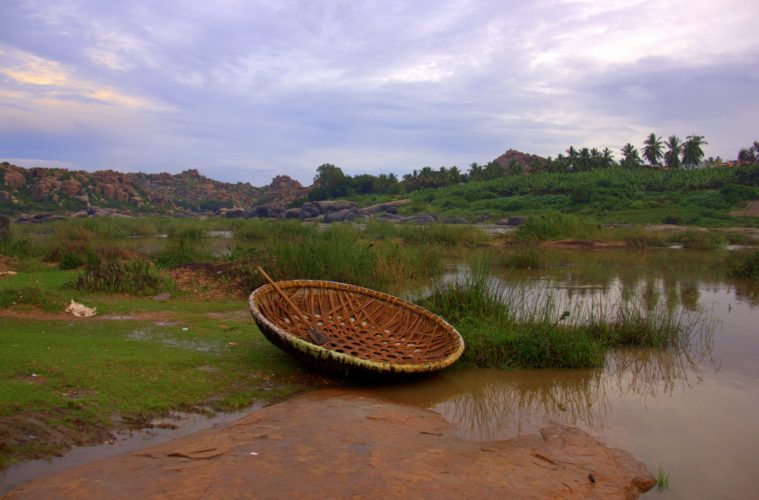 Hampi riverside ruins lie scattered on both sides of Tungabhadra. I stumbled upon them while wandering around one morning after my daily customary Virupaksha Temple visit. The Tungabhadra river banks always enticed me with their boulders and I loved the half-hidden elaborately carved rock faces, shrines, and stony walkways scattered along the path. That trail meandered along the bends of the river and connected the Hampi Bazaar with the famous Vittala Temple. Huge boulder piles held obscure rock portals and half hidden rocky chambers peeped at me from the other side of the river. Stone cut steps leading down from the hidden temples cascaded down the boulders to the river and they were apparently the favourite hiding places of leopards and sloth bears which called the area home.

The most evocative Hampi ruins lie by the river.

Hampi riverside ruins are for the solitude seekers

Hampi had quite a bit of wildlife and the Tungabhadra river too was infested with crocodiles. Ludicrous looking hand painted precautionary signboards staked along the river warned the people of crocodiles and they made serious effect despite being very primitive in design. There were lots of monkeys in Hampi and silvery black-faced langurs swooped underneath rocky portals. Striped Indian squirrels bounded over coracle boats and Hampi riverside ruins lay amidst them all. Of them all, Hampi’s boulders were the most magnificent to watch and precariously balanced, they gave a surreal aura to the landscape. The clever Vijayanagar architects incorporated the natural rocks of the regions into an integral part of the city’s construction of the city and their sculptors used the smooth curving rocks as canvases.

You may also like: What makes Hampi such a special place?

Explore the Hampi riverside ruins without a map.

Spot the exquisite 108 Shivalingas during your Hampi riverside ruins walk

It was during my walk along the Tungabhadra that I discovered the Hampi riverside ruins and the magnificent 1008 Shiva lingams were the first to meet my eyes. Engraved in a matrix-like pattern on the boulders along the river, the presence of the religious icons astonished me and I started paying more attention to my surroundings. More of Hampi river ruins started becoming visible and all along the way, I found beautifully carved stone Nandi bulls (Lord Shiva’s mount) staring from every nook and corner. They were scattered as beautiful afterthoughts and from being half submerged in the water, to perched on boulders in a forgotten manner, Hampi was filled with statues of Nandi.

The exquisitely carved Shivalingas on the natural rock face

Take a break somewhere near the Krishna Temple complex

After the sublime Hampi river ruins tapestry, the serene Krishna Temple complex started in a most surprising way. Seemingly, out of nowhere a big vista of a planned ancient urban locality spread in front of me. The entire Hindu celestial community had earthly abodes there and temples, dedicated to endless gods and goddesses stood in squares. While some remained well preserved, a few of them were in a most photogenically ruined condition. It was impossible to not be mesmerized by its dramatic setting and I sat down under one of its colonnaded porticoes, to take it all in. Neat rows of nearly ruined stone temples were bordered off by boulder piles and rocky portals jutted out from top of them like watchtowers.

Watch the Vijayanagar past mingle effortlessly with the present Hampi

The Krishna temple which is famous for beautiful stone pools held preserved rocky structures in midst of their mirror-like water and ruby red dragonflies buzzed on its grainy stone surface. Rows of intricately carved half ruined structures created a broad path between them and soft green grass carpeted it lushly. Jewel-coloured slim snakes slithered over engraved stone chariots, elephants, and dancers and a dim light enveloped them all. It was a cloudy day when I started my Hampi river ruins walk and by the time Krishna Temple complex attracted me towards its poignant ruins, rain lashed out in needle thin drop. Hiding underneath buildings from another era, I watched rains pour on the Vijayanagar’s past and present. Underneath that blinding rain, the past and present mingled hypnotically. Shepherds materialized from nowhere, just as the downpour started obliterating visibility and big hairy goats scampered nimbly over the rock piles. The Vittala temple happened immediately after the rain stopped and it was a truly magnificent complex.

Hampi riverside ruins are one of the enticing places of this surreal destination. Think of an array of 108 Shiva Lingas carved on the flat rocky surface and a finely carved rock sculpture of Lord Vishnu in a reclining position, along with forgotten abandoned stone portals and ruins. There are also a number of shrines, statutes, pavilions, and artifacts which make the Tungabhadra banks perfect for photographers, solitude seekers, and historians. The timings are from 6 AM to 6 PM and you can go there every day. There is an entrance fee of 30 INR and though, this walk should take a maximum of 45 minutes, you can spend a whole day there. My tip is to take a local guide, who can show you the obscure niches and spots.

The narrowest part of the Tungabhadra river

Location of the Hampi riverside ruins

The Hampi riverside gorge just north of the Kodandarama Temple is exceptional for being the location of many clusters of ruins. The most famous ones are the collection of Shiva Lingas carved on the flat rock surface and the carved Anandashayana Vishnu on the rock cleft. This gorge is one of the best locations to explore the balancing boulders of Hampi without a gaggle of tourists. Up north of the Kodanda Rama Temple, you can choose between a number of narrow well-explored paths going towards the riverside. The main path that runs between the Kodanda Rama Temple and Sugreeva’s Cave is the best trail from where to branch to your riverside expedition.

There is more than what meets the eyes at riverside Hampi

Precaution to keep in mind

This is also the narrowest portion of the river. So proceed with caution. Be careful of slippery rock surfaces, especially when close to the river. Tungabhadra river is famous for its killer eddies and crocodiles, so do not venture into the water. Stay away from there in the dark. It is believed to be the nighttime haunt of nocturnal wild creatures like local leopards and sloth bears. You can reach this spot by a peaceful coracle boat ride, which plies the river throughout the year except during monsoon. Do negotiate with the fee before starting your journey and a good bargain should land you at the price of 50 INR for such a short trip. Instruct the boatman to take you to the 108 Shivalinga spot and you can explore from there. If you are not short of time, then dedicate a day to explore this intriguing area or alternatively combine it with a Vittala Temple Trail, which I am going to explain in the next post.

Beautifully carved pillars of one of the forgotten portals

What to include in your Hampi riverside ruins trail

This is perhaps the quietest

And the most evocative part of Hampi.

Scattered all along the

Tungabhadra river bank on both sides

And a place where the present

Mingles silently with the glorious past.