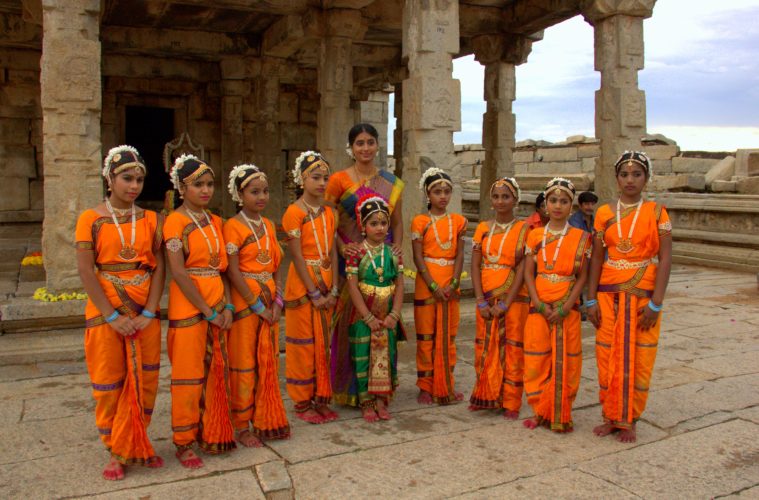 I visited the Vittala temple right after the Hampi riverside ruins. Despite being awed by the riverside ruins, the magnificence of the Vittala temple complex was such that I spent an entire evening there, being rooted to the spot. Dedicated to Vittala, an avatar of the Hindu god Vishnu, the complex was truly mind-blowing. It was Hampi’s epicenter of glory and totally deserved the title of being its crown jewel. The magnificent Stone Chariot, which once graced an Indian postage stamp stood in the middle of the sprawling complex.

One of the elephants of the Stone Chariot of Hampi

The iconic Stone Chariot of the Vittala Temple complex

Now, that was an exquisite piece of art. Made from intricately carved painted granite blocks, the Stone Chariot was larger than life and as close to reality as possible. Its embellishments were very detailed with spokes, axles, a seating area, and two stone elephants were positioned in front of it. Surrounded by colonnaded halls which too were covered with detailed carvings, the chariots had remnants of two stone horses as well. Though now mostly ruined, the horses were originally positioned as a team with the elephants. Numerous lovely towers, pavilions, temples, and halls filled the complex and it was more expansive than I imagined.

You may also like: The Virupaksha Temple Trail of Hampi

The gorgeous monolithic Musical Pillars on the elaborately detailed Maha Mandap platform were stunning. Even though I was not able to produce notes by tapping them, their beauty made up for the lack of music. Exquisite carvings of musicians covered every inch of the pillars and dancers, musicians, and other royal entertainers remained frozen on them for eternity. They provided a significant peep into the lavish lifestyle of the Vijayanagar empire before it was sacked and plundered. The Vittala temple complex branched out into several other halls and several stone statues of Narasimhan (half man and half lion figures), blooming lotuses, and beautiful women surrounded the visitors from all sides. The crowded effect was simply gorgeous and their reflections on small patches of mirror-like calm rainwater puddles heightened the magic.

The elephants and pillars of Mahamandapa

The puddles reflected the glory of the ruins against a violet cloudy twilight sky and creamy frangipani blossoms, tossed about by the wet wind floated on their surface. A group of little Bharatnatyam (classical south Indian dance using elaborate costumes and gestures) dancers, who were filming a show inside the Vittala temple complex completed the atmospheric picture and they revived Vijayanagar’s unbelievable long lost magnificence in a very time travel like way. What can I say? I simply got lucky or the travel gods simply favoured me that day.

The iconic Stone Chariot of Hampi

Vijayanagar means “City of Victory” and it is believed to have been famous far and wide for its beauty, wealth and power. Foreign travelers like the Portuguese explorer Domingo Paez, who visited the area after 1520 chronicled Vijayanagar’s beauty in superb praises. He was astonished by its size, glory, and prosperity. According to Paez, its markets were full of silk and precious stones, and the city had many bejeweled magnificent courtesans, ornate sandalwood palaces, and lavish festivities. Although dead and gone, the expressive Hampi ruins confirm Paez’s story and the lovely dancing crew of Vittala temple complex brought the glory back to life, albeit momentarily. With so much of beauty scattered like gems, leaving Vittala temple was very hard. So I stayed there longer than expected. That is not unusual, because Hampi has the tendency to waylay people and entrance them for life.

You may also like: What makes Hampi such a special place?

Vittala Temple Trail Not to be Missed Spots

You can combine the Vittala Temple trail either by beginning or ending it with the Hampi riverside ruins. This trail was inspired by Ami Bhat of Thrilling Travel and you can check out here excellent guide here.

In a magical place filled with marvelous ruins

All around it ruins of Vijayanagar empire

And it is only at the Vittala temple

That the erstwhile powerful kingdom’s glory

Can be keenly felt.

Though much of it is ruined and the glorious moment is fleeting,

The magnificence of the Vittala Temple complex is unparalleled.