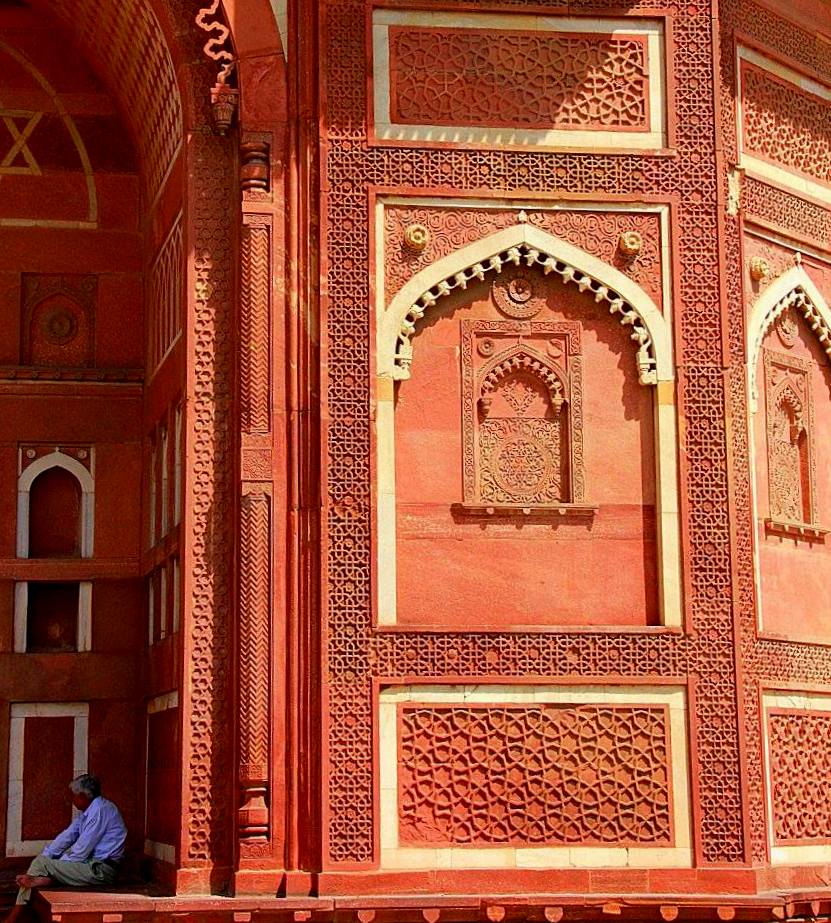 The gilded prison called Agra Fort, one of most magnificent forts in India

At the bend of the Yamuna River, just 2 kilometers away from the Taj Mahal, lies the magnificent Agra Fort. It is so close to the iconic Taj, that most tourists overlook the fort until they visit the site and then their jaws drop. The high red-sandstone Agra Fort is one of the most beautiful forts in India and it has huge historical importance. Akbar, the great Mughal emperor laid its foundations and Agra Fort was built between 1565 and 1573. Constructed in the shape of a half-moon, it lies on the ruined remains of the earlier Rajput structure. The fort was a much-loved project of a mighty emperor and was developed as the seat and stronghold of the Mughal Empire for successive generations. While Akbar commissioned the walls and gates, his grandson, Shah Jahan was behind the construction of the principal buildings. Shah Jahan’s son Aurangzeb was responsible for the ramparts of the fort and ironically, he also imprisoned his aging father there until his death.

Agra Fort was the pride of the Mughals

A magnificent fort, a gilded cage or both?

It is a massive monument that is extremely graceful despite the behemoth size and its beauty belies the function as the infirm emperor’s gilded cage. Can a monument so beautiful be such an unkind prison or is it to be believed that the emperor chose to stay there just so that he could see his beloved wife’s mausoleum, the Taj Mahal from the windows? Whatever painful story lies behind the stunning embellished corridors of the Agra Fort, when we visited there, only a pure golden light-filled its interiors. The light filtered in through the numerous marble jalis or stone lacework windows like honey gold fingers of the sun and dust particles dances in the rays. Persian influenced flowers, vines, arabesque designs, and calligraphy surrounded us like magic spells and it was wonderful to be in the midst of such pure beauty: well, pure beauty and a huge number of people. To say, that Agra Fort was crowded would be an understatement and we waited in the queue to purchase tickets for nearly an hour.

Shah Jahan was imprisoned there by his son

Agra Fort is a city within a city

It was a typical hot spring day and the sun was strong. I was three months pregnant, exhausted and nothing apart from this fantastic fort could have dragged me out on that hot afternoon. The Agra Fort is a not-to-be-missed site of the city and it hardly takes time for the epic beauty of this mammoth red sandstone and marble fort to sink in. The fort was built to impress and its curved sandstone bastions reach a height of over 20m and stretch for around 2.5km. They are marked by a series of massive gates though only the Amar Singh Pol is accessible to visitors. Before the Yamuna river changed its course, its water flowed along the eastern edge of the fort and the emperors had their own private ghats built into it. The Agra Fort contains a series of buildings, vast underground tunnels, courtyards, and pavilions and much of it was destroyed over the years by a series of attackers like Nadir Shah, the Marathas, the Jats and the British. It was the British who re-started using the fort as a garrison and even today much of the space is used by the Indian Army and is off-limits to the general public.

Recommended for You: THE STORY OF FATEHPUR SIKRI: AN ABANDONED ROYAL CITY

It is a city within a city

Agra Fort is the story of a poor, rich, powerful king

My exhaustion, pregnancy woes, and slight claustrophobia forced me to explore the Agra Fort in a very leisurely manner and today I am thankful for that. It is not a monument to just breeze through and take photos, but a place to observe, absorb, contemplate, and listen. I believe that old monuments have stories to tell and the stone walls of the Agra Fort whispers tales of filial love, abandonment, treachery, pain, and heartbreak. This monument bears a lot of pain and pride and it will unburden its heart only if you have the time. Then there is the staggering amount of beauty to take in and its every decorated inch speaks of an emperor who loved art passionately. Shah Jahan lived, loved, and died there and with him, went the pride, aura, beauty, and the enigma of the great Mughal rule. The Agra Fort, in my eyes, is not just a fortified Mughal city, but a story of a poor rich powerful man. With so much of pathos and beauty, how can you not love a monument so beautiful, even though it was once a gilded cage for a great emperor?

Agra Fort is also known as the Lal Qila

Also known as the “Lal –Qila”, “Fort Rouge” or “Qila-i-Akbari”, the Agra Fort is one of the highlights of the city of Agra. It was once the capital of the mighty Mughal Empire.

By Train – The Taj Mahal can be visited on a day trip from Delhi, though an overnight stay in Agra is recommended. Agra is well connected by rail. The main railway station is Agra Cantt and there are daily Shatabdi Express services from Delhi, Varanasi, and many cities in Rajasthan.

By Road – It takes less than 3 hours via the Yamuna Expressway to reach Agra from Delhi. The road starts from Noida and there is a toll tax of 415 rupees per car for a one-way trip (665 rupees round trip). Comfortable, air-conditioned Volvo buses depart from Anand Vihar terminal in New Delhi for Agraevery hour during the day. The cost is about 700 rupees per person. Agra can also be reached by air from major Indian cities or by an organized from Delhi.

You may also like: ALL YOU NEED TO KNOW FOR VISITING THE TAJ MAHAL

When to Visit the Agra Fort

The best time to visit is between the months of November and March when the temperature is moderate. Go early to avoid the crowds.

The ticket cost for Indians:

The ticket cost of foreigners

The fort is open from sunrise to sunset. The best time to visit the fort is during the early morning or sunset. Make sure to stay back to enjoy the light and sound show.

This is one of the most beautiful forts in India

Prohibited Items inside the Agra Fort

What to see inside the Agra Fort