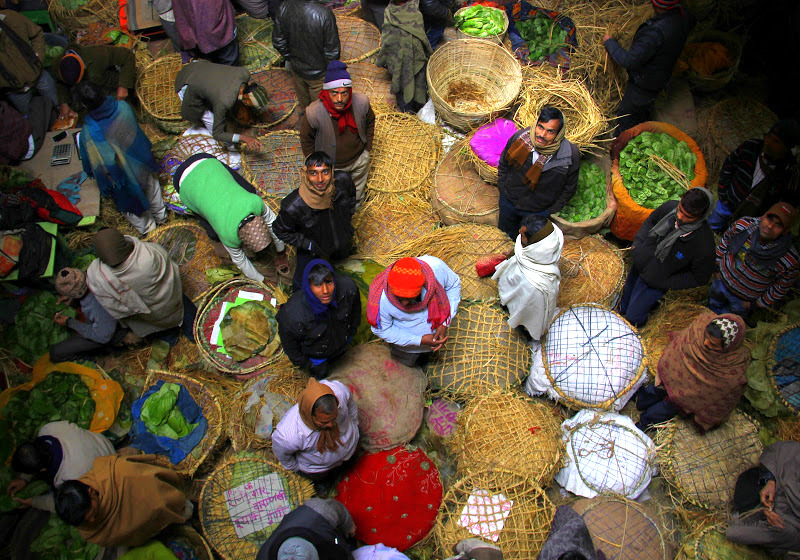 A guide to the most photogenic Varanasi markets

Varanasi is fantastically touristy. It is an epitome of the real “exotic” India and though most beautiful things came at a price, they are really worth it. Being a huge trading hub for centuries, Varanasi has evolved into a giant commercial spot and the city contains some extremely photogenic wholesale markets. They are little spots of hyper-busy activities and products like flowers, paan, khoya (dried whole milk), tendua (local cigar leaves), iron goods, etc are stacked, sampled, weighed, bartered and sold. Substantial sums of money exchanges hands only to be tucked away in grimy cloth bags or baskets and the sellers, buyers, and gawkers of Varanasi markets make much racket.

I love their lazy business transactions, the way the commercial hum basks in sunlight, and nearly everybody has time to preen and pose for the tourists’ cameras. There is hardly any of the cutthroat competitiveness of huge city bazaars and Varanasi markets are colourfully chaotic. We were a bunch of curious walkers who joined our guide, Anil Kumar, one early Varanasi morning and he showed us the winding trading arteries of the heart of his city. Winters in the north and central India are really severe and we trudged past groups of shivering men, stray dogs, and goats in pullovers huddling around hasty bonfires.

Recommended Read: VARANASI, A CITY OF LIFE AND DEATH: MY FIRST IMPRESSIONS

You can find commerce at every step in Varanasi

The old Kashi lanes were not yet congested with traffic and even the holy cows did not make their presence felt. A very dim sun barely managed to penetrate the haze wrapped city, yet Varanasi markets were humming with activity. The tendua market was already been full of tight, big rolls of addictive leaves and the shoppers at the khoya bazaar were bargaining hard. We pushed past milkmen on cycles, priests in saffron, and men with baskets heaped with lemon and chili (evil eye antidotes) for sale. Long lines of multi-coloured freshly dyed clothes fluttered merrily as we followed Anil on our Varanasi markets walk.

You may also like: FROM KASHI TO VARANASI: AWESOME STREET PHOTOGRAPHY AND TIPS

After quick strolls to the tendua, spice, iron and khoya market, it was soon time for Bansphatak Flower Market and we could smell it even before entering its periphery. Located inside a small courtyard kind of place, Bansphatal Flower Market overflowed with commerce. Hibiscus, marigold, tuberose, holy basil leaves, and many other scented florae tumbled out in glorious colours. They were stuffed in baskets, strung in lines across the body of the seller, spread on sheets, and were bought in hordes. The flowers were as colourful as the people buying-selling them and we had caught a late sun waking up over the floral square. The market peaked with the strengthening sun and we watched the old courtyard get quickly bathed in pure golden light. The quaint but busy paan market was next on our itinerary and that was yet another extraordinary space.

Suggested Read: THIS IS MY CALCUTTA

Paan auction at a Varanasi market

The mind-boggling Paan Dariba of Varanasi

Benarasi paan is coveted throughout India for centuries and even Bollywood has dedicated songs to its unique flavour. The heart-shaped betel leaves which are mixed with gulkand (rose paste), dry dates, spices, and coconut in a real Varanasi style is considered to be a delicacy and in Kashi wrapping a good paan mix is an art. Thus it is no wonder that the city has a market dedicated to these green heart leaves and visiting the Paan Dariba was a real eye-opening experience. A mind-boggling variety of paan was displayed, inspected and auctioned at breakneck speed and we watched in awe as hundreds of bales of the products were shipped off briskly to be sent across the country and the world. Although held inside an old building with space no more than a small school courtyard, the Paan Dariba is one of its most important Varanasi markets.

Varanasi markets are worth the early morning walk

To witness so much of commerce and activity concentrated in such small spaces is an overwhelming experience and we finished the market walk with exhausted feet and cups of delicious creamy malaiyo. Silky smooth saffron and pistachio infused condensed milk, with an extremely frothy top, the malaiyos melted in our mouths and we watched in silence at men churning umpteen vessels of milk to get the frothy delights. They worked silently in a singular rhythm often looking up to inspect the happenings of the world around them and it was exactly then, that it struck me hard, the truth behind Mark Twain’s famous quote about Varanasi. “Older than history, older than tradition, older even than legend, and looks twice as old as all of them put together”, Varanasi indeed is a timeless stubborn charmer with a lifestyle which has remained nearly unchanged for centuries.

Though hustlers and rickshaw drivers often kill the charm of Benaras by dragging tourists into commission-paying stores, apart from those, Varanasi markets are a delight to explore. Shopping and photo walking in Varanasi markets can be very rewarding experiences. The best areas to browse are:

You can locate these places on the Google map or join a walking Varanasi markets tour. Under no circumstances, go shopping with a guide nor ask any guide or rickshaw-wallah to take you to any shop. To join a guided Varanasi walking tour, check out Yo Tours, Varanasi Walks, and Heritage Walks in Varanasi. For self-guided Varanasi walks, check out this incredible post by Backpackadventures.

This is the old world charm of Varanasi

A little girl selling tendua leaves in one of the Varanasi markets.

A flower seller in a market in Varanasi

A Benarasi textile weaver of Varanasi

A malaiyo seller in Varanasi