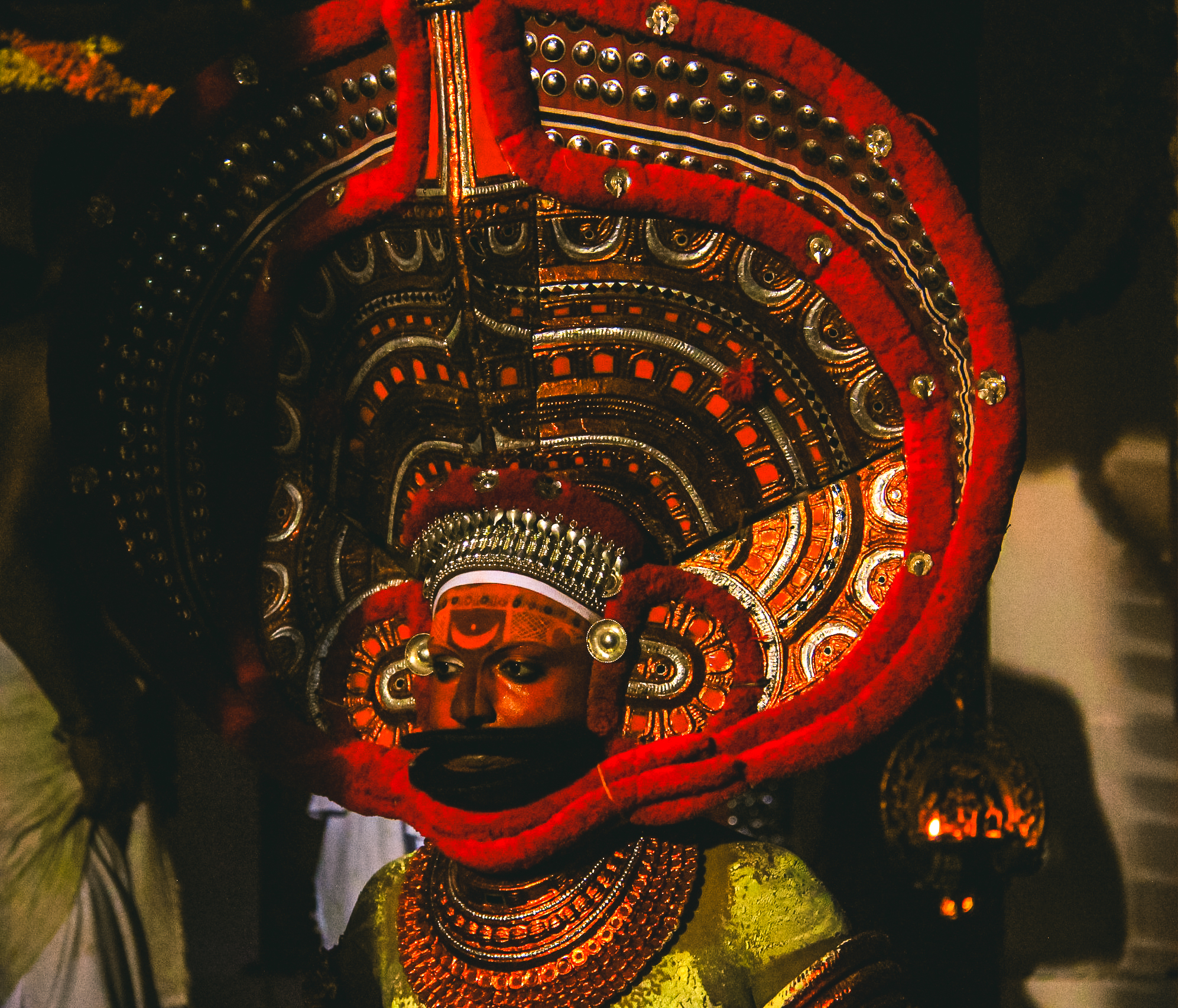 My glimpses of art and culture of Kerala

Kerala is all about vibrancy, vigour and life. You may think it is because of the amount of happy sunshine the small southern state receives throughout the year or the abundance of natural goodness found in its every niche. Whatever the reason maybe, vigour is definitely the keyword in Keralite culture and this joie de vivre is visible in almost all aspects of life there. From the hearty Onam celebrations, tongue tingling fiery cuisine, the muscle relaxing massages, dazzling festivals to active arts, the art and culture of Kerala is bursting with energy. Although, I witnessed only a tiny slice of this vibrancy, the memory of those experiences are engraved in my mind forever. A seasonal boat race, a quirky Tiger Dance festival, an impromptu Syrian Christian dance ceremony, a Cochin evening of Keralite performing arts and most recently the intriguing Theyyam ritual…Kerala has wowed me with its energetic dazzle.

My first brush with the art and culture of Kerala was the Pulikali Tiger Dance and it was a bizarre, yet absolutely fantastic experience. Held every year at the small temple town of Thrissur, Pulikali coincides with Kerala’s biggest festival Onam and it includes bodypainted male dancers jiggling their humongous bellies to the beat of drums. The effect is simply out of the world and the sight of rows of pot bellied dancing men with feline snouts painted proudly on their bumps is unforgettable. The vibe of the festival is typically Kerala; electric with energy and expectancy and a happy roar goes through the crowd as the Pulikali Tigermen dance their way into the drunken night. Like most people, I was completely unaware of the festival, till a documentary filming assignment took me to Thrissur. Until that day, I never imagined that massive bellied men could be remotely cute, but the Pulikali Tigers were definitely been awesome. Strangely, the performance was also borderline burlesque and they represented the folksy aspect of the art and culture of Kerala. Although held every year like a real festival, Pulikali is actually a folk art performed by artists during Onam. It literally means “Tiger Play” (Puli=Tiger and Kali=Play in the Malayalam language) and is a 200-year-old art. Initiated by the king of Cochin, Raja Rama Verma, Pulikali was introduced to represent the wild and brave spirit of his forces and he wanted to show off his might by parading his valiant men on Onam. This was the mighty beginning of Pulikali or the Tiger Dance and for more details, you can read more about the Pulikali Tiger Dance

Full of quirky fun, this is a Pulikali Tiger

When it comes to showcasing energy, nothing beats the traditional boat race of Kerala. One of the most amazing and ancient synchronized sporting events, Vallam Kali (as it is known locally), dates back to 300 BC Assyria. Although Vallam Kali includes races of many kinds of boats, it is the Snake Boat Race which hogs the limelight. Being a huge tourist attraction which includes a championship for national trophies. Vallam Kali is nowadays has become synonymous with the snake boat race. The Nehru Trophy Boat Race, held every August near Allepey is the largest of such events and it is a huge crowd puller. Although I did not manage to see the famous Nehru Boat Race, my experience of Vallam Kali was a very enjoyable affair. On a fine autumn morning, a local friend of mine took me near Alleppey where a community Vallam Kali was underway. Being a local affair, the boat race was held among a cluster of neighbouring villages and the palm-fringed water was already been hectic by the time we had arrived. At least half a dozen decorated snake boats bobbed with heaving rowers and smaller canoes, motorboats, and ferries circled around them excitedly. The race started with a resounding fog horn drawing a wild cheer from the crowd of spectators along the banks of the backwaters and soon the rhythmic boatmen song filled the air. Rows of muscled men sat straddling a long snake boat and they raced in rhythm to the musical instructions of the navigators. Though the purse money was small compared to the bigger competitions, the men rowed as if on fire.

The active sport of Vallam Kali

I cannot deny that while my up, close, and personal experiences of the art and culture of Kerala were intensely fun, their hectic energy overwhelmed me at times. It was also tiring to attend events in the outskirts of the city after long days of filming and to unwind on the last day I treated myself to a Kerala dance show at Greenix Village in Fort Cochin. It was an extremely touristy thing to do and I actually looked forward to a relaxing evening full of dance and music. The show turned out to be a power-packed performance of Kathakali, Mohiniyattam, Kalaripattu, and Theyyam and once again the energy of the art and culture of Kerala left me enthralled. While Kathakali with its fantastic costumes and mask was very entertaining, Mohiniyattam enthralled me with its sensuous grace and Kalaripattu mesmerized me with its agility. But, it was the Theyyam performance that left me wanting for more, so much so that I returned to Kerala in December 2018 to witness an actual Theyyam ritual in Kannur. To know more about Theyyam, check out the official Theyyam calendar.

There is nothing more intriguing than the Theyyam ritual

“This is crazy! I felt transported back to at least 1,000 years. And this is not a tourist performance like in Africa. People actually believe in it.” These were Tarek’s astonishing words after he witnessed the mysterious Theyyam ceremony in Kannur. We were in a small village somewhere in the northern district of Kerala, when a late-night Theyyam performance blew our minds away. What started as a dance of masked men soon turned into a full-blown fire dance filled with chanting priests, drummers, and fire walking. Believed to predate Hinduism, Theyyam refers both to the portrayed deity and to the actual ritual. These dramatic spirit-possession ceremonies rank as the most extraordinary spectacle of art and culture of Kerala and increasingly every year more travelers are heading north to witness this ritual. Held at village shrines called kavus (sacred groves) throughout northern Kerala, more than four hundred different manifestations of this jaw-dropping ritual exist in the Kannur area. Each is distinguished with its own distinctive costumes, elaborate jewelry, body paints, face make-up and gigantic headdresses called mudi. Theyyam performers believe that they become the deity they invoked and this makes them perform superhuman feats, such as rolling in hot ashes or dancing with a crown that rises to the height of a coconut tree. Theyyam increases in tempo as the night progresses and finally culminates in a frenzy before dawn when often the dancer or a member of the troupe gets struck by a kind of possessed spasm. This was how our 2018 ended amidst the glorious art and culture of Kerala and we stayed at the lovely Kannur Beach House to rejuvenate our souls for the New Year. P.S It was also a fantastic place to recharge the batteries with or without Theyyam.

Kalaripattu and other action-packed performances,

Kerala is all about

And the quaint charm of tiled roofs.

And festivals which double up as sports or parades.

The art and culture of Kerala are varied and full of fun.

They buzz with energy

Are excellent compositions for photography.

Classical, yet quirky like this woman played by a male Kathakali dancer,

The art and culture of Kerala are larger than life.